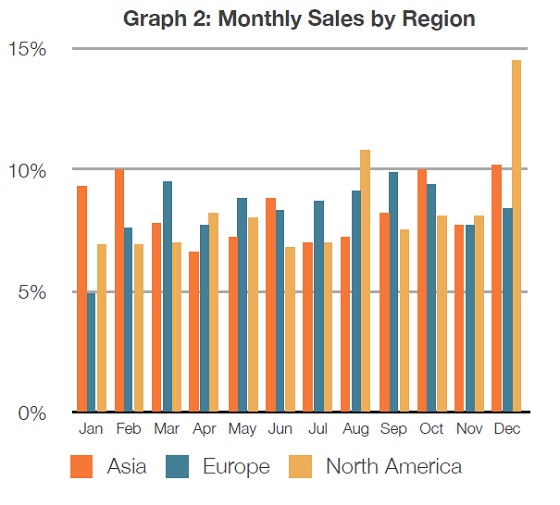 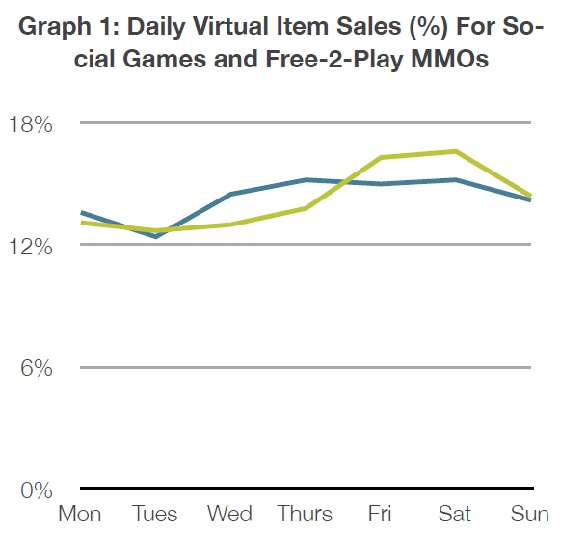 LiveGamer and SuperData Research have released two studies to date that look at virtual goods sales by seasonality, geographic regions, and days of the week. The studies look at sales trends of roughly 2.6M virtual items across 23 different titles in Asia, Europe and North America. More after the jump.

It’s no surprise that the dynamics of virtual item sales differ drastically from those of physical world. However, conditions like seasonality do have a strong impact on sales. National holidays, religious celebration and back to school times all exert influence on consumer expenditure.

In order to better understand the data, the study broke down the sample by looking at sales trends across the different continents by different months. From an aggregate perspective, overall sales dip in April and July, pick back up by October, dip again in November and climax in December. This stands in stark contrast to the packaged entertainment industry in which 50 percent of the sales took place near the end of the year. Virtual item sales on the other hand see roughly 19 percent of their sales during those months.

As shown in the graph, understanding the data from a locality and price point perspective can help paint a clearer picture of what’s going on with these sales. The highest grossing months for Asia are February, October and December, with each accounting for about 10 percent of the sales. The model is nearly the same for North America although December sales make up 14 percent. Europe’s best months are March and September. The data should be analyzed at a more granular level to understand trends across specific countries and regions as opposed to an entire continent to not miss specifics.

Another interesting point to note is that the price points of virtual items are significantly less than those of packaged items, which can range over $50 for AAA titles. With sales spread out

across the year, companies no longer have to run the risk and burden of launching massive marketing campaigns  near the end of the year that all compete for the attention and dollars of consumers.

Taking this a step further, it’s also important to look at virtual goods sales by the days of the week. The second study presented data derived from the same set of 2.6M virtual items. Virtual items sales varied by type of game (free to play, social, MMO and FPS). Social games see a slow start in the beginning of the week and perk up starting Wednesday until Sunday. Free to play games see relatively the same number of sales. MMO and FPS related sales pick up on Friday and peak on Saturday, declining again on Sunday.

To summarize, virtual goods sales in social games are more prominent during the week as these games tend to be played more during office hours vs MMOs and FPS that are higher demanding. Game developers can look at the data and figure out when to offer discounted prices to drive sales in a manner similar to what retailers and grocery outlets employ.

Sales also vary by countries but what’s really remarkable is how spending patterns for the same game can vary by country. In an example from the study looking at Korean and Japanese players, Koreans tend to spend more at the start of the week vs Japanese that spend more mid to end of the week.（source：social times）