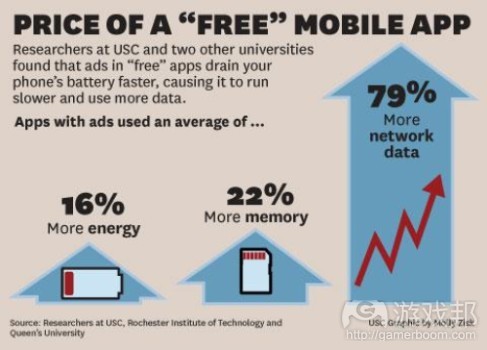 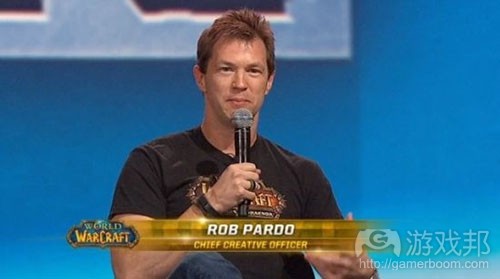 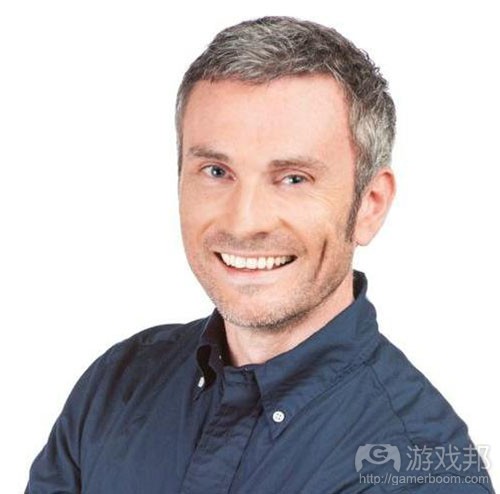 1）Here’s what those free apps with ad support really cost you: 79% more data use

Successful CMOs achieve growth by leveraging technology. Join us for GrowthBeat Summit on June 1-2 in Boston, where we’ll discuss how to merge creativity with technology to drive growth. Space is limited. Request your personal invitation here!

You may not spend a penny while you tap away in your favorite mobile game, but this doesn’t mean it doesn’t cost you in other ways.

Smartphone and tablet apps that feature advertisements are a drag on your device, according to a new study (via Science Daily). They drain your battery faster. The ad-heavy apps put an extra strain on the processor. And downloading the assets for the ads uses a ton more network data. So while software like this may not necessarily cost you cash, they do damage the experience of using that expensive handheld computer in your pocket. But with the mobile ad market making $17 billion last year, they probably aren’t going anywhere.

The study comes from University of Southern California researcher William Halfond, who collaborated with other researchers out of Rochester Institute of Technology and Queen’s University in Canada. Halfond will present the findings at the International Conference on Software Engineering in Italy this May.

The group found that apps with ads use, on average, 16 percent more power than ads that don’t feature commercials and popups. Some of the worst apps were actually 33 percent worse. A smartphone that would typically last 2.5 hours under harsh conditions only last around 2.1 hours on average with ad-supported apps. In the worst case scenario, certain power-hungry apps lower the battery life to just 1.7 hours.

Halfond’s study also reveals that ad-supported apps use 22 percent more memory and 56 percent more of the central processing unit. That’ll not only lead to more battery usage, but to an experience that feels more sluggish overall.

But ads are the worst when it comes to network usage. On average, apps with commercial videos and interstitial marketing used 79 percent more data. If you don’t have unlimited data, that could start to cost you money.

Using ads to generate revenue is a popular business model on mobile. The majority of people with smartphones don’t like paying for apps, and ads enable developers to earn some money from having thousands or even millions of people playing for free. It’s one of the ways that the free-to-play Flappy Bird made an estimated $50,000 every day despite featuring no way for players to spend money.

But Halfond’s study finds that people notice the difference. Apps that use them have a slightly lower rating of about .003 on average on iTunes and Google Play.

“In absolute terms, this is very low, but in the crowded and competitive world of apps, it’s a huge difference,” said Halfond. “It can make the difference between your app getting downloaded or going unnoticed.”（source：venturebeat）

Successful CMOs achieve growth by leveraging technology. Join us for GrowthBeat Summit on June 1-2 in Boston, where we’ll discuss how to merge creativity with technology to drive growth. Space is limited. Request your personal invitation here!

Unity game developers and designers have a new ally — a top Blizzard chief.

Game development platform company Unity announced today that it has brought on former Blizzard chief creative officer Rob Pardo as creative adviser. Pardo was a lead designer on popular MMO World of Warcraft, as well as other StarCraft and Warcraft strategy games, and will now use his experience to guide and assist Unity’s developer community. He also oversaw the development of hit digital card battler Hearthstone: Heroes of Warcraft, which uses Unity, one of the industry’s most popular game-engine and tool platforms.

Beginning next month, Pardo’s role will have him traveling, tour-style, to meet developers in North America, Europe, and Asia to discuss game design and creative processes as well as appearing at developer groups to meet with Unity users.

In an interview just ahead of this announcement, Pardo told GamesBeat that the company is still figuring out how it will meet with developers worldwide. He says that the goal is to benefit game development at large, so Unity will do its best to share learnings through a variety of means, including blogs on its website.

“Honestly, we are still figuring this out as we go along,” Pardo said. “We’ve taken a first pass on the tour list, but I know we will continue to iterate on it in the coming weeks. It is important to get a good diverse group of developers as well as diversity in locations.”

On the changing of roles, Pardo says that this announcement just makes things official and that he has already been working this way in some capacity.

“As a game maker who has the opportunity to survey the games landscape, the developer tour project with Unity fits organically with what I have been doing on my own,” Pardo said. “Even while at Blizzard, I would often like to visit other studios to share design knowledge, tips, and tricks. The Unity tour project just makes this slightly more formal and allows me to help the game development community at a broader scale.”

Pardo credits his new employer’s platform as a key component of Hearthstone’s success.

“Hearthstone was a bit of an experiment for us,” he said. “It was a small team of around 15 people for most of development, so while bigger than some indie studios, it was a pretty major departure for Blizzard. Unity allowed a lot of flexibility and efficiency that made it possible for a team that size to create a really polished, complex, and ultimately fun game together without having to explode the core team’s size.”（source：venturebeat）

Downie, the No. 2 exec at Zynga, formally resigned and is now joining Unity, whose design engine and tools are some of the most used in the game industry. This move comes 15 days the company announced that after Don Mattrick, the chief executive of Zynga for 20 months, left and was replaced by founder Mark Pincus. Here’s the filing.

“We are thrilled to have Clive on board,” said John Riccitiello, the chief executive of San Francisco-based Unity Technologies, in an interview with GamesBeat.

The turnover isn’t a big surprise, but it won’t be good news for Zynga, which missed analyst targets in its last earnings period and reported a slight loss for 2014. Downie joined after Mattrick came on board, and he was the operational chief on mobile games. Zynga was the social gaming king on Facebook, but it’s struggled in the transition to smartphones and tablets. Downie’s job was to use his expertise — he was formerly the chief of the DeNA West division of Japan’s DeNA — to help Zynga figure out mobile.

Unity plans to use that experience to help Unity compete in a competitive game-engine market. It recently launched the Unity 5 game engine — a multiplatform tech — but it’s battling with Epic Games’ Unreal Engine and a host of smaller companies for marketshare.

“Clive and I go back a long ways,” Riccitiello said. “I’m super-happy to have him. He has a deep history in mobile gaming and a long history of marketing skills.”（source：venturebeat）

According to a report research firm SuperData released today, China’s digital game market hit $7.5 billion in revenues already. The country ranks No. 2 in terms of digital sales in Asia, counting for 38 percent of the region’s revenues. Led by MMOs and free-to-play games, the forecast for Asia’s digital games market is to hit nearly $19.6 billion by the end of the year and climb to $21.2 billion by 2016. SuperData predicts that China’s digital game revenues will hit $8.2 by then.

China ranks just under the region’s leader, Japan, which currently holds 45 percent of digital game revenues. The Japanese market has seen $8.82 billion in revenues over the same time period while having only a tenth of China’s population thanks to heavy spending on mobile games. But China’s growth rate is five times that of the region’s average, and it’s set to grow another 8 percent next year, says SuperData.

It won’t be long before China catches up.

“By the end of 2015, Asia’s digital games revenue will reach almost $20 billion, carving out 38 percent of the worldwide market,” said Stephanie Llamas, the lead analyst on Superdata’s Digital Games in Asia 2015 report. “The region’s revenue will increase by just 5 percent this year after enormous growth through 2014, making it key for Western publishers to be increasingly strategic about their entry into the market.”（source：venturebeat）

5）The Earth will spend $91.5B on video games this year

The global gaming market will reach $91.5 billion this year, according to an upcoming report from research firm Newzoo. That will represent a 9.4 percent increase compared to 2014’s $83.6 billion. Revenues will increase on PCs, consoles, and tablets, and smartphones will lead the way with 21 percent growth year over year. Spending on PCs and Mac — which includes traditional retail downloads from the Steam digital distribution store as well as free-to-play behemoths like the competitive strategy game League of Legends — will still outpace all other categories. Newzoo explains that while markets such as social and handheld gaming are shrinking, that cash is mostly shifting to other kinds of games.

The report also claims that China, already one of the biggest markets for gaming, is about to grow even larger. Newzoo is estimating that Chinese revenues will grow by around 23 percent this year. That could move it into first place, ahead of the United States, as the top country in terms of game-related spending. That’s a year ahead of previous predictions, which claimed China would overtake the U.S. as the world gaming superpower in 2016. If Newzoo’s predictions hold out, China would bring in around $22.2 billion compared to the $22 billion for the United States.

Countries in the Asia Pacific region will also see some serious growth. This will continue to come, just like it does in China, from mobile and PC gaming. Consoles will still make most of their money from North America, Europe, and Japan.

Finally, Newzoo was willing to share some predictions about the slightly more distant future. The firm claims that global gaming revenues will reach $107 billion by 2017. This will come at a time when smartphones have likely matured and new virtual-reality and smartwatch platforms have either proven their viability or not. If either takes off in a major way, they could lead to an exponential increase in revenues, but Newzoo isn’t betting on that at this point.

Newzoo will release all of this information and more in its upcoming 2015 Global Games Market report, which will go live June 8.（source：venturebeat）