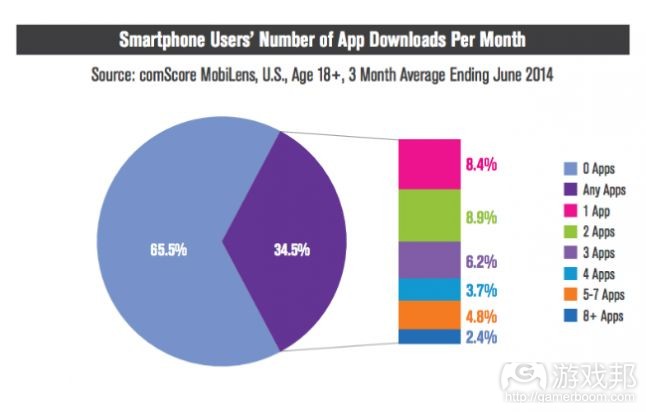 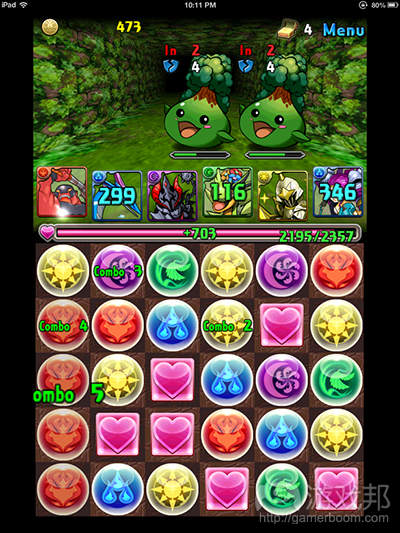 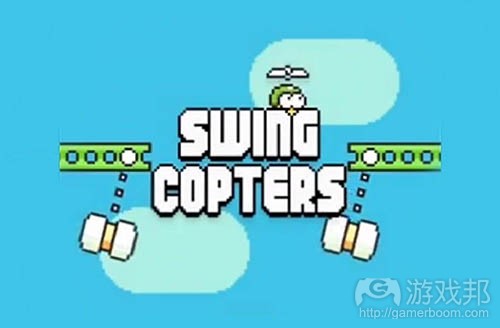 The ComScore research firm released a new report on the state of the U.S. mobile market that suggests most people aren’t downloading a lot of new apps for their devices, even as their total app usage time continues to rise.

The report’s most notable takeaway for game makers? Roughly 65 percent of those surveyed by ComScore downloaded less than one new app per month for their smartphone, which seems like bad news for any mobile developer hoping to drum up downloads of their next game.

While the problem may be assuaged by platform holders like Apple taking measures to boost discoverability of new games and apps, it might not be enough: ComScore’s survey of smartphone user habits suggests the majority of mobile users may simply be content to find a few apps they like and stick with them.

Games like Candy Crush Saga and Words With Friends were among the ten most-used apps for those age 35 and older, though they accounted for an average of between 1-2 percent of the total time spent with mobile apps by those surveyed.（source：gamasutra）

Apart from setting up a new Singapore subsidiary, the Puzzle & Dragons company also sold GGF B.V., a wholly owned holding company based in the Netherlands, to its parent company SoftBank (9984).

GGF B.V. was specifically established last year in March to acquire 51% of Supercell together with SoftBank (more on that below).

According to GungHo, the deal is worth US$344 million and will lead to an un extraordinary profit of US$73 million for the current fiscal year (which ends for GungHo in December 2014).

The background of the deal is a bit complicated to explain:

After agreeing to buy Supercell in principle, SoftBank and its subsidiary GungHo established “Kahon 3 Oy”, a so-called special-purpose company in Finland last year.

In addition, GGF B.V. was established in North Holland with 1 Euro capital as a wholly owned subsidiary of GungHo to acquire the Kahon 3 Oy shares.

Following the purchase, Supercell became a subsidiary of SoftBank in Finland.

The Puzzle & Dragons maker says the motivation for the sale is to focus more on emerging markets and Asia going forward.（source：serkantoto）

GungHo Online continues to dominate the Japanese mobile market with Puzzle & Dragons, which has now passed the 30 million downloads mark in Japan.

Those numbers suggest that, on a global scale, the company still has significant room to grow. GungHo Online founder Kazuki Morishita noted plans to do so during an interview with Gamasutra earlier this year, stating his company is seeking to focus on expanding into foreign markets — starting with North America.

“We’re taking it one step at a time,” Morishita told Gamasutra. “To have a presence in the U.S. that’s as strong as it is in Japan.”（source：gamasutra）

Another piece of research says that gaming might be bad for you — but don’t roll your eyes just yet.

A new study out of the University of Texas says playing violent video games for more than two hours daily may lead to symptoms of depression in preadolescent kids. The results are far from concrete and require further study, but this inquiry has some notable data.

Studies often lead to further study, so that conclusion should come as no surprise. But what’s significant about this association, small though it may be, is that it is consistent across all racial and ethnic subgroups for boys.

Since video games have existed, questions have emerged about their effects on health, including children’s mental well-being. The bulk of studies have tried to determine whether playing violent video games leads to aggressive behavior in real life. To date, conclusions have been murky. Researchers have neither been able to prove a link between violent behavior and violent games nor disprove one.

But this study takes a different approach to analyzing the effects of violent video games on mental health. Rather than focus on violent behavior, this study focuses on depression. Researchers at the University of Texas asked themselves, if witnessing violent behavior in real life can lead to depression, can exposure to virtual violence affect the same response?

Other researchers have had a difficult time proving that playing violent video games especially over prolonged periods of time can lead to aggressive behavior. But a link between depression and violent gaming over long periods of time might account for those inconsistent links to aggression, as it’s occasionally being a symptom of depression.

The study, as noted at the beginning of this article, takes pains to say while boys who played violent video games for longer showed a significant increase of depressive symptoms, more information is needed to prove causality.

Even if an association was confirmed, further studies would need to be conducted to investigate potential underlying mechanisms, what happens to symptoms over time, and causality.

But in an arena full of murky conclusions these researchers seemed to hit on an interesting nugget worth exploring and possibly an explanation for why researchers haven’t been able to determine whether or not violent video games lead to aggression.（source：venturebeat）

After a surprise reveal earlier this week, you can play Dong Nguyen’s latest mobile game today.

Swing Copters is out now on iOS and Android, and it’s a free-to-play app. The simple arcade-style game has players controlling a tiny person with a helicopter helmet who shoots wildly into the air and off to the side with the tap of the screen. Tapping again makes the character swiftly change direction while gaining altitude. As with Flappy Bird, players guide their avatar through narrow passages. Also like Flappy Bird, Swing Copters is incredibly difficult. Nguyen’s last mobile game surpassed millions of downloads and made the developer a lot of money. It’s possible that Swing Copters could do the same, but it has a long way to go before it does so.

Fill out our 5-minute survey, and we’ll share the data with you.

Swing Copters only features one in-app purchase. You can pay $1.29 to remove banner ads. Otherwise, Nguyen will make most of his cash by placing advertisements for other games at the top of the screen. If you’d rather not spend money to swear at your smartphone while you fail to get past the first obstacle for the 100th time, don’t worry — the ads are actually unobtrusive.

Nguyen rose to mobile-game prominence earlier this year when Flappy Bird inexplicably shot to the top of download charts on both iOS’s App Store and Android’s Google Play marketplace. After reportedly earning around $50,000 a day from in-game ads and receiving a ton of attention in the media and on social networks, the developer decided to remove Flappy Bird from both stores. The game designer explained that the game was negatively affecting his simple life and that he felt that Flappy Bird is too addictive.