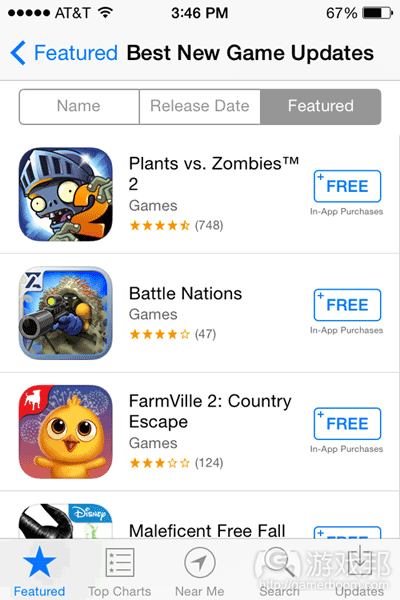 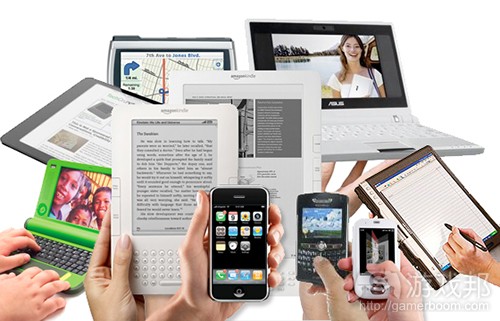 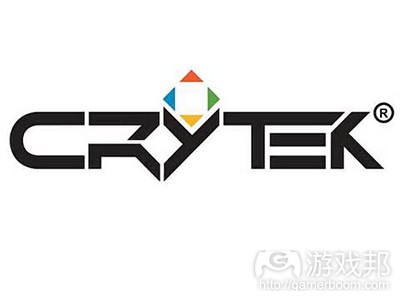 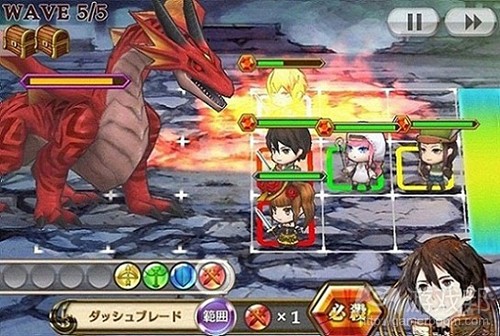 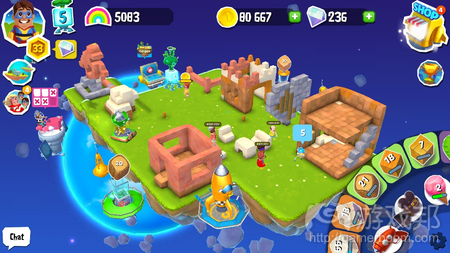 Developers have long complained that the iOS App Store doesn’t offer enough avenues for players to find games. Today, Apple has added a new discovery tool to its App Store with “Best New Game Updates” — which should help players connect with games that are actively being worked on.

The update first came to Gamasutra’s attention thanks to this tweet by mobile consultant Adam S. Gutterman. You can see a shot taken from the live App Store of the new section below, which allows users to sort the updates according to three criteria.

Discoverability has been a primary concern for mobile developers for years — and platform-holders have been slow to make changes to their store environments in response. Earlier this month, at its annual WWDC conference, Apple announced that further discoverability features are slated to come with this fall’s iOS 8 release.

For its part, Google’s Greg Hartnell told Gamasutra yesterday that its Google Play Games service and SDK — which works on both iOS and Android — is tailored to increasing player engagement and game discoverability. （source：gamasutra）

Above: A full third of developers get cheated when trying to acquire users

And it gets even more unfortunate, as most developers are doing it wrong.

In a 230-developer study that covers over 9,000 apps and almost 400 million monthly active users, VentureBeat has learned that developers’ least-favorite user-acquisition method is often the most financially successful. In addition, the most-favored is also the least likely to bring in the best high-quality users.

And while Facebook and Google are the undisputed king and queen of user acquisition, five other companies tower above the dozens of other user-acquisition competitors.

The app marketer’s challenge is clear: With 98 percent of revenue coming from freemium apps, finding the right users is critical to whether an app lives or dies. Entice users who pay for premium upgrades or in-app purchases and you’ll live.

Making the whole game more complex is untrustworthy user acquisition companies — a full third of developers in our study report getting cheated when working with one of these firms.

According to the app and game makers we surveyed, cost-per-install is the mobile developer’s runaway favorite advertising mode for user acquisition.

In fact, 52 percent of developers choose CPI first, more than double the number of the next-leading method. That’s probably due to its sheer simplicity: If the cost-per-acquisition is lower than your user lifetime value, you pull the trigger. For the same reason, it’s also very safe … you know exactly what your costs are going to be, and if they fit within your app’s economics, nothing can go wrong.

Above: 70% of developers use social media to acquire users

Three other user-aquisition methodologies, regardless of user acquisition company or partner, generate better users at a lower price, including cost-per-lead (CPL), which generates just as many high-value “whales” who spend more than $75/year in your app despite being used by 10 times less frequently.

In the crowded user acquisition marketplace, however, where we counted easily 75 competitors, five companies stood head-and-shoulders above the rest. In fact, NativeX, Fiksu, Chartboost, Flurry, and the recently acquired AdColony all tower above their competition, with cumulative response numbers comparable to YouTube and Twitter.（source：venturebeat）

Nintendo has opened a new product development building in Kyoto near its headquarters, as management looks to interact more closely with hardware and software developments.

As reported by Kyoto NP, and as translated by Nintendo Everything, this new building cost around 19 billion yen ($186.3 million), and will focus on produce new hardware and software for the next-generation.

A pair of reports published this week by Eurogamer and Kotaku suggest that CryEngine developer Crytek may be having trouble paying all of its employees, losing some of them in the process.

According to Eurogamer, anonymous sources within Crytek UK claim the company has failed to consistently meet payroll for all employees, leading to low morale and the departure of more than 30 staff members since 2011.

The report is a follow-up to Crytek’s recent statement refuting German magazine Gamestar’s accusation that the company is on the verge of bankruptcy.

Kotaku’s Jason Schreier has also been following the story for some time, and published a report today claiming that Crytek has had trouble paying all of its employees after losing a deal with Microsoft to develop a sequel to the studio’s Xbox One launch game Ryse. According to a number of Schreier’s sources, Crytek employees have been expressly forbidden from discussing salary issues over email.

“It upsets me greatly that Crytek continues to deny these allegations,” reads one email from an anonymous former Crytek employee cited by Kotaku. “They are all true!”

Gamasutra has reached out to Crytek for comment, and we’ll update this story with any meaningful new information.

If you or someone you know has been affected by this situation, you can email Gamasutra to tell your story confidentially. （source：gamasutra）

Newsbrief: Last month we reported that Sega parent company Sega Sammy Holdings was focusing its business on free-to-play mobile games, and now we know why: that’s where the company is making a sizable chunk of its money.

According to a strategic planning presentation disclosed to investors earlier this month, Sega’s free-to-play mobile RPG Chain Chronicles reaped over 7.3 billion yen (~$72 million USD) in sales for the company across iOS and Android in the nine months following its launch last July.

That’s remarkable financial performance for a mobile game, and it helps explain why the company is planning to launch 30 new free-to-play titles in the current fiscal year.

At least two of those will be Chain Chronicle games, as the company plans to capitalize on game’s success by releasing a sequel on mobile and developing the free-to-play PlayStation Vita game Chain Chronicle V based on the original mobile hit.（source：gamasutra）

More than two years in the making, Supernauts has launched on iOS today as a new entry in the world-building genre that Minecraft pioneered.

The Helsinki, Finland-based Grand Cru development house has attracted a lot of attention and funding for the cartoon-like 3D title, which the company bills as the “most ambitious iPhone, iPad, and iPod Touch game of all time.” And looking at the trailers, you can’t really argue with that. Now the big question is whether the gameplay is fun enough to keep players coming back to the free-to-play game.

If the game succeeds, it will be one more example of how Finland is home to the premier mobile game hubs of the smartphone and tablet era. Other prime example’s of Helsinki’s success include Rovio, the maker of Angry Birds, and Supercell, which created Hay Day and Clash of Clans (one of the biggest money-making mobile games of all time). Apple is featuring Supernauts on the Apple iTunes App Store today.

Supernauts is set in a cartoon world of the future where the polar ice caps have melted and the player has to build a new habitat for humans on asteroids in space. You build use touchscreen controls to build 3D objects and characters. And while you are doing it, other players can join in, helping you create items in the same 3D space. The worlds are limited in size and scope, based on the size of the asteroid. But you can build on multiple asteroids. There are already more than 50 missions where players can rescue humans on Earth.

“Grand Cru is a game studio focused on developing groundbreaking mobile games of the finest quality and we’re aiming to revolutionize social gaming with Supernauts,” said Markus Pasula, the CEO of Grand Cru. “Created for a broad audience, the game is truly social and provides players with multiple ways to share their creations and experiences. We want to take real-time social interactions in mobile gaming in to another level.”

In the progression trailer below, you can see how quickly players can build amazing worlds in a relatively short time. In one to two days, you can have your own little village in space. And within weeks, you can have a unique custom world that reflects your own creativity. Players can create themed worlds in worldwide contests. Players can also set up teams to compete against other teams in tournaments.

“We have spent over two years perfecting the gameplay experience for the iPad, and we are certain that with our intuitive user interface everyone will be able to join the fun of creating awesome worlds in 3D,” Pasula said.