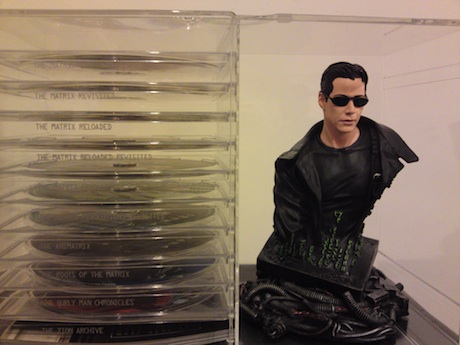 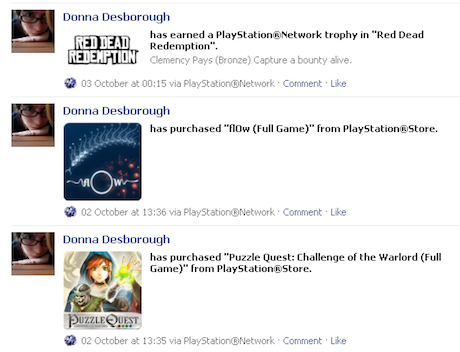 With an expansion of the social networks into every aspect of our lives it was only a matter of time before we saw it starting to integrate into our more conventional gaming. Those who own a Playstation 3 will already know that they can now connect their Playstation Network, (PSN), account to their Facebook account.

Although currently all you can post are your trophies that you’ve collected from games and your recent Playstation Store purchases, the future may yet hold even more integration as Sony and other console manufacturers open up the Facebook API to games developers. This means that potentially games companies could introduce all many more social elements that interact between your Facebook account and the game. The access to the Facebook API will allow games to push information to your profile and also pull information from it, like images and your friend list, into the game.

While it is big news that Facebook and Sony are getting together for this, this isn’t the first time this kind of thing has been done. The Nintendo Wii was the first to have this great idea of bringing people together while giving them complete contro within a single platforml. As you added friends to your Wii friends list they would begin showing up in your games or in the parade.

Despite the Wii avatars being a bit scary looking, for some reason it always made me happy to see a friend in a crowd or to be exercising next to them. It was cheesy, but it worked and you’d find yourself looking for your friends. You were in complete control and yet you got to interact with your friends in games.

Players will have control over the Playstation games sharing their information with Facebook and pulling information from it, which should solve any concerns about privacy. Being able to turn it on and off per game or to be prompted may be a good option also, because you may not want to share out or bring in information to and from Facebook for every game you play.

Nonetheless, what social integration could mean is that games will move into be cross media. It was done with the Matrix movies and it was actually pretty good. There were the movies, games and comics all working together to create a more rounded out story and background. If this is applied to games then it could mean more interaction and more features.

The Matrix franchise included comics, anime and games. The popularity of the movies managed to introduce fans to other media types that previously they may have not previously been been interested or exposed to.

This has obvious benefits to both the franchise owner and the players. If the different media types only add and don’t take away from the experience, then players would share with their friends.

Of course the more the players share then the more popular and the wider the game and network spreads. Pushing and pulling data to and from Facebook, or any social network, means that word of mouth is king. Get it right and you’re riding high. Get it wrong and you could doom your franchise, or at least the integration into the network.
Platform Lock-in Should Not Lock Friends OutI have one simple reservation to this and it is something that kind of concerned me about the cross media population with the Matrix movies also; what if you don’t get the entire story if you don’t investigate all of the media options for the game? Will the game stand on its own and give you everything you want out of it? Will you miss some of the features and story if you don’t have access

to the selected social media platform?

With many games these days you don’t get the whole package when you start playing. This is especially true on games played on social networks like Facebook.

Something that would be quite fun to use this feature for would be to unlock parts of the game through sharing. I would really enjoy unlocking pieces of story that link me to my friends and fellow

However, forcing players to use the feature would certainly be the wrong path to go down.The last thing I want is to be forced to do something outside of the game in order to have critical game devices.

So much could be done to expand the story and use the players to give a game more depth. However, the ability to make players part of the story and allowing them to create some of the story is something that could really work. It would be similar to a multiplayer mode for those who want a bit more depth to their gaming experience.

Cross media could easily leave some people in a place of missing out on good parts of games. Could the future be that a game will be judged on having these cross media platforms when they may not really have a lot to do with the game?

What would be good to see is if games developers can find more unique and inventive ways for players to interact that doesn’t involve multiplayer, yet still enhances the game for both players.

Leaderboards is one thing, but how about more character detail, such as backstory and subplots, to be shared with other players?

Certainly RPGs that allow for character creation could benefit from allowing players to create more freely their characters’ backgrounds and allow linking to other players that may not be on their PSN list, but can be found through Facebook. Certainly there are as many good possibilities as there are bad.

What needs to be thought about is how to implement this feature that spreads the game’s franchise without degrading the game for those that don’t interact with it — it shouldn’t be annoying and invading for the gamers or the Facebook users. A balance needs to be struck and it will be a tightrope that could be hard to walk and get right. The Matrix franchise managed the balance very well, but in this age of social media it may be a bit more difficult to manage.

What made the Matrix cross media story parts work so well is that it did not cannibalize the original story. The movies were the core and could be easily consumed without losing anything at all of the experience. If you did go further and read the comics and watched the anime and played the game you were rewarded with these pieces of story that made little things in the movies mean so much more.

It felt like a little secret between me and the writers when I noticed some small piece that related from the other media to the movies. I felt like I’d gone down the rabbit hole and I knew more than other people watching them. This involved me as a consumer with the story and the franchise more.

Essentially it made me feel special. That’s what they did right by going cross media. They engaged me and involved me without degrading the core.

This should be the aim of anyone taking a game cross different media levels. Engage the player, make them feel special and don’t alienate them. Not an easy task, but it can be done with some forethought. （Source：SearchEngineWatch）