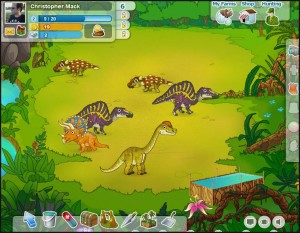 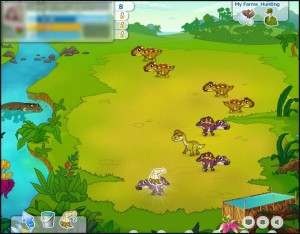 John Hammond’s idea of a Jurassic Park may have ended in catastrophic failure, but your’s doesn’t have to. It’s been a long time coming but finally someone released a Facebook game about dinosaurs (well, at least one that we’ve found). The app is called Jurassic Farm, from 2Bsocial, and while it may have an interesting premise, its concept is all too familiar.

Despite what the name suggests, Jurassic Farm is not actually a farming game. It’s one of those animal husbandry, pet-caring titles, only with dinosaurs.

Obviously, this makes the core of the game pretty simple: Grow, care, release, profit. As players purchase dinosaur eggs, the creatures will grow relatively rapidly (though higher levels dinos, of course, take significantly more time) and players must ensure they are well fed and have plenty of water.

These two elements are easy enough. With each visit, players fill up a trough of water – which is odd considering there is a river in your first farm – and feed the titanic lizards according to their diet. Based on the species, they will be either an herbivore or carnivore, with particular types of purchasable food filling them up more quickly. As long as the food is respectively plants or meat, the animal will eat it, but food they “dislike” will fill them up less it seems.

In addition to hunger, players must also ensure the health of their prehistoric pets with both medicine and protection. Medicine is fairly self-explanatory, but as dinosaurs get greener, the get sicker, and are, in turn, less valuable. Additionally, periodic predators will appear and attempt to steal your eggs and/or baby dinosaurs, so players must either fend them off manually, or use virtual currency (Gems, which can be bought and, at least for the first day, be earned by coming back 24 hours later) to build fences that keep them out for a limited time.

As a matter of fact, all the decorations appear to be limited in time. As players level up, they unlock the ability to buy new types of farms, such as a forest for herbivores or an island for carnivores, and each environment has various decorum that can be placed there for X amount of time (i.e. a week). The longer the user chooses to buy it for, the more it costs.

It’s a curious idea, to say the least, but the player has no evident control over where the decorations go. They just sort of appear in a default position. Granted, they do look sort of nice, but it really defeats any sort of purpose behind the personalized virtual space concept. Additionally, most of the décor doesn’t seem to have a point beyond aesthetics, making the time limit all the more odd. In fact, the only ones that make sense are the fences, as they passively protect your farm from the noted predators.

Unfortunately, fences only protect from non-player predators. You see, Jurassic Farm actually has a bit of a player versus player element to it. Users can actually go “hunting” in other random players’ (or friends’) farms. So long as the dinosaur is not classified as “old,” which is obvious anyway since they get shaggy and decrepit looking, users can hunt them and turn them into meat to feed their own animals.

It’s a most interesting concept, but once you’ve hunted, that’s it, the dinosaur is toast, and there isn’t a lot the victim can do, by default, other than try and get revenge. This is, however, balanced to some degree by only allowing three hunts, on what appears to be a daily basis. Additionally, users can purchase various power ups for a paltry amount of gems (two) that can insure you for any lost dinosaurs in a hunt, can hide your identity from your victims, and even warn you when you are being poached.

Other issues currently hindering the game play experience are a few irritating annoyances. Frankly, Jurassic Farm doesn’t do a very good job at updating itself and providing real player feedback.

For example, the game actually asks you to refresh your farm to see growth of your dinosaurs or hatched eggs. It doesn’t happen all the time, but often enough to be annoying.

Overall, Jurassic Farm has an interesting premise and a few new features, but the execution feels a bit incomplete. It misses the mark in regards to virtual space decoration, and while the limited time purchases work for defensive elements, they feel pointless for everything else. Such issues are made up for, somewhat, by the curious hunting mechanic, but with the only way to mitigate its devastating results (especially if you happen to become victim to someone you don’t even know) being through virtual currency, it’s a feature that might become more obnoxious than anything else.

Nevertheless, the app is brand new and already has over 3,000 monthly active users. It certainly needs some work, but it’s an idea with room to grow.