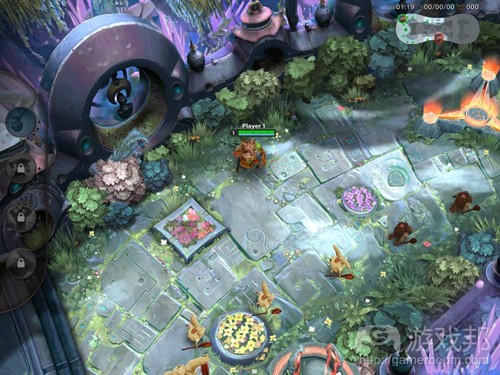 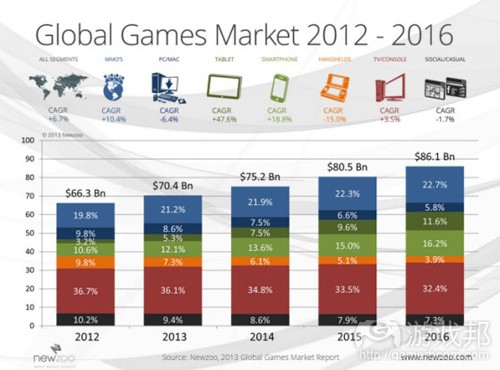 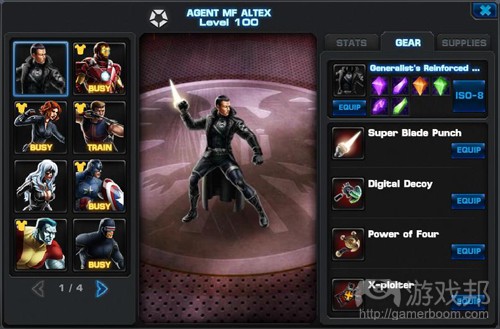 1）’No one’s complaining about not being able to trade iOS games.’

“No one’s complaining about not being able to trade iOS games.”

“No one’s complaining about not being able to trade iOS games,” he said. “Naturally that’s because they are much cheaper, but if second hand games contributed to the income of triple-A game
developers, then they could become cheaper too.”

“The economies in games are changing,” said Blomberg. “They have to be in order to be sustainable.”

A recent academic study explored the impact that used games have on the marketplace, and found that if console manufacturers eliminated used game sales, the move could benefit the game
industry — but only if prices of games came down as well.（source：gamasutra）

2）NPD: Console gamers still spending more than those on mobile

Despite the continued rise of smartphones, console gamers are still spending more money on physical and digital games than those on mobile.

That’s one of the findings from NPD’s Group’s Gamer Segmentation 2013 report, with ‘traditional’ formats remaining king when it comes to pure spending – most likely because of the relative amounts involved.

However, when looking at the actual number of people playing games on different formats, the ‘free and mobile gamer’ segment comes out on top, accounting for almost a third of those surveyed.

NPD claims said mobile and free segment is up two percentage points – hitting 29 percent of the 8,831 individuals polled for the study – serving as one of the few groups to enjoy a rise.

The NPD Group’s study comes after SuperData found that mobile gamers in the US are spending more than ever.

Speaking on the matter, NPD analyst Liam Callahan said there are plenty of opportunities amongst both gamer segements.

“Growth among both the free and mobile gamer and avid omni gamer segments speaks to the different types of gamer personalities, the type of experiences they are looking for and the growing opportunities provided by different gaming capable devices.”（source：pocketgamer）

U.S. consumers spent $3.5B on games in the first quarter, flat from a year ago

U.S. consumers spent $3.5 billion in video games in the first quarter. That figure includes physical games bought in retail stores as well as games purchased in digital formats. The figures are flat compared to a year ago.

The figures include used and rental games ($559 million), and digital games including add-on content downloads, subscriptions, mobile games, and social network games ($1.59 billion). The
physical game sales were $1.37 billion in the first quarter.

“Digital spending fully offset the declines in physical format spend in Q1 2013,” said Liam Callahan, industry analyst at the The NPD Group. “There is strong growth in full-game downloads and downloadable add-on content sales across consoles, PCs, and portables, up a combined 25 percent in the first quarter of this year.”（source：venturebeat）

OpenFeint founder Jason Citron is unveiling his new startup’s battle arena game, Fates Forever. This is the first title from his tablet-only game company, Hammer & Chisel, and it’s the company’s first attempt to become the “Blizzard of the post-PC era,” a reference to the extremely successful Blizzard Entertainment (World of Warcraft, StarCraft, Diablo).

The title is interesting because it comes from a well-funded startup — Citron has raised $2 million to date — and a successful entrepreneur. Citron founded OpenFeint as a mobile social network and sold it to Japan’s Gree for $104 million in 2011. Citron took the money and founded Hammer & Chisel, which he previously called The Phoenix Guild. The new name reflects a craftsman’s approach to making high-quality hardcore games on mobile, Citron said in an interview with GamesBeat.

Warcraft, debuted in 2009 and established the hot category of the multiplayer online battle arena (MOBA) game. Since then, multiple rivals have emerged, but League of Legends still
dominates with tens of millions of monthly players.

But Citron is very focused on making a successful MOBA on tablets. In his game, three players can battle against another three in a beautifully rendered environment. In the world, humanity has fallen under a curse, where people turn into animal-human hybrids at the age of 13. The people fight in combat tournaments in the hopes of changing their fates.

“Here we are, a year later, and there is almost no good content [games] for gamers to play for hours at a time,” Citron said.

Fates Forever doesn’t have a single-player version, and you can’t play it on a smartphone — only on a tablet. It has touch-oriented special moves that you can’t do with a keyboard or mouse. For instance, a wizard’s special move is to fire a blast of flame. You trace the path of the flame with your finger by swiping the screen. Another character uses flicking gestures to activate its special move of dashing into enemies. Such features are unique to tablets.

“I love hardcore games, and I love mobile games – a space I’ve been involved with since day one,” said Citro. “I’ve been watching the next-gen consoles floundering while most people are buying and spending time on tablets. I really want to show the world what a great game in the post-PC era looks like.”

Citron says that touchscreen devices are replacing consoles as the primary medium for strategic and competitive gaming. In a poll taken of attendees of the Game Developers Conference in
March, about 58 percent of gaming professionals said they plan to release their next game on a tablet or smartphone. About 11 percent said they would develop for the Xbox One and the same amount targeted the PlayStation 4.（source：venturebeat）

The global games market is expected to grow at a compound annual growth rate of 6.7 percent to $86.1 billion by 2016, according to market researcher Newzoo. But there will be plenty of shifting happening within the market as smartphone/tablet games grow strong and console games lose market share.

Amsterdam-based Newzoo says the games market — including all territories and platforms — will hit $70.4 billion in revenues in 2013, up 6 percent from a year ago. Much of that growth comes in Asia Pacific and Latin America, where growth will hit 11 percent. North America and Europe will grow a modest amount. This year, the fastest-growing category is smartphones/tablets, which will be up 35 percent to $12.3 billion.

Massively multiplayer online games will grow at a compound annual growth rate of 10.4 percent through 2016. Computer games will be 35.8 percent of the market, or $30.9 billion, in 2016.

Next-generation console games are expected to grow revenue at a global growth rate of 3.5 percent, but they will lose market share overall. Asia Pacific will have 37.9 percent of the global market share by  2016.（source：venturebeat）