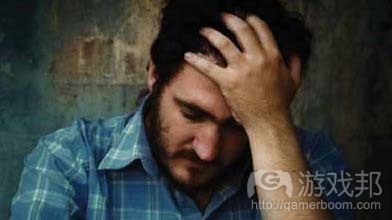 The 5 stages of depression in game development

A little over a year ago, or about 3-4 months into the development of my first game, I fell into a very deep depression for which I have since been on medication and in and out of therapy. It’s entirely possible that, given my previous career involved promoting work by others, I’d had distance enough from that work not to let the stress (and there was indeed much stress) get to me. Although with depression of any kind, focusing on one factor (or even external factors at all) isn’t exactly healthy, so I only bring up the work situation because it’s pertinent to my experience here.

Suffice to say, it’s been more and more difficult with each passing month to keep my head up high or down and working, depending on where it needs to be, and I feel it’s been detrimental to the project, the team and to myself in stages.

I should stress that these are stages I’ve identified in my experience only, and I certainly don’t suggest that these are uniform and are felt in the same way by everyone going through depression of any kind.

Not quite as clear cut as the simple name suggests, I’ve experienced denial of two things primarily: that I actually have been suffering from depression, and that I am actually pursuing a creative endeavour and really putting myself out there. Within the comfort of that denial, I was able to spend many months still being productive, and with productivity comes no need to address the problem.

When some people experience depression, it comes in a form which is markedly different than the stereotypical inability to get out of bed or do normal, everyday things. They can instead become manic, acting stalwart as though nothing is wrong except for an excess of energy. I can’t say I ever reached had that kind of manic response (my depression has tended never to take that particular form), but I certainly did find myself persisting in my work as though nothing was wrong. I just had an unpleasant feeling of being dragged down which I refused to acknowledge was there.

It eats away at you. I was going through this stage of allowing myself to believe everything was ok for the first half of last year, finally admitting something was very wrong mid-year.

Being that myself and my brother had never attempted to create a game before, but believed we had the ability, it was vital that we be able to stay strong throughout the almost two-year project of making a game. With one of us starting to flag under the surface, it became very easy for the other to do the same. I can’t speak for Rohan, obviously, but I certainly felt that as it reached around July of 2012 that the game we were making wasn’t going to be worth a damn – that no one would care, that it wouldn’t sell and that (worse still) all the critics (many of whom are known to me personally) would think it was a broken game with nothing to offer. Of course, at that stage it was, but it was pre-alpha, so no reasonable person should’ve expected it to be in a different state.

Operating on no budget except for our part time jobs, our ability to believe in ourselves was (and is) of the utmost importance in getting the game finished at all. We know the odds are against us. We’ve no publisher, no finance, no free-to-play silver bullet business model (which is all the rage these days) and are entering an increasingly crowded market whose main competitor (Android) is eating away at the user base month by month.

We always knew we’d finish it. We’re both stubborn like that. But when things got tough during production and the scope of our game kept on proving larger than we’d thought, the usual process of self-doubt one might feel in that situation was amplified by my willingness to believe that I hadn’t the talent to do game design at all in the first place, and that anyone who believed in me simply didn’t know any better.

It didn’t matter if it was a partner, friend, family member, colleague or even a stranger who I professionally respected. Faith in me and my abilities was based (in my mind) on ignorance on the faithful’s part, and the only thing it ever made me feel was that I was destined to let yet another person down.

Upon realising how bad things had gotten under the surface, I had to take the big step of actually admitting to myself that I was far from ok. This phase was really kicked off by that dreaded moment in any trough of depression where I found myself struggling to do basic everyday tasks.

I couldn’t get out of bed, was on the verge of tears for no apparent reason, couldn’t stomach human communication and was finding reasons why everyone close to me who’d want to help out in such a situation would be either too busy, not care, find it too hard to deal with – any other number of useless and baseless suppositions.

So I finally picked myself up and went to the doctor, started on the journey (not for the first time in my life) of going through therapy and at 28 years old, finally decided to accept anti-depressant medication. It’d been suggested to me before but, being as I am stubborn, I always refused, believing my depression to be caused primarily by external influences which could be resolved. It was only once I’d run out of negative things in my life to blame that I became truly concerned with my ever-worsening state. Thing were going really well. I was finally making a videogame, something I’d wanted to do since a very young age. I had flexible work hours, personal projects, great friends and I made sure to give myself time to read philosophy at my local café every day of the week.

That this phase came at a time when my work on the game was at a relatively light stage waiting for other elements to come together was the only saving grace for it. The major early design document work had been done and the fine-tuning and balancing was awaiting further features to be ready.

So, last August and September, I pulled right back from work which wasn’t vital (read: paid). As much as creating this game is my main driving force for personal growth these days, I did as much as I had to do for my paid job so I could eat and pay rent, and everything else fell by the wayside.

Almost as bad as my temporary hiatus from the project was my being on board but struggling to communicate with people, trying to keep my problem to myself while working with Rohan to lead the team. Being as our various contractors rely upon myself and Rohan to direct them in creating the artwork, animations and audio for our game, an uncommunicative and distant person directing the project is particularly useless. I’d become a road block to others’ productivity, bottlenecking development. Or at least, that’s how I felt.

To those around me, it might’ve either seemed like I didn’t care about the game, or about their work, or (as a best case scenario) that I trusted them and wanted to demonstrate it by way of giving them a lot of autonomy. I certainly hope the latter is more the case.

Rohan’s ability to step up and handle a lot of the directing of our team was vital here. Had we not both been in a position to do so, we might have been in a really problematic place.

As much as I’d like to pen a fifth stage in which everything works out fine, sadly the best I’m able to offer is that with completely honest and open communication between myself and my brother, we’ve been able to support each other through a time where neither of us is making much money, a lot of people are depending on us, we’re putting ourselves out there in a way we’ve never done before and… well… it’s stressful.

We’ve committed to paying a not insignificant amount of money we totally don’t have to get down to PAX Australia to reveal our game, and as July creeps ever closer, we’ve been increasing the amount of time spent needing to vent at one another, second-guess ourselves (because that’s always helpful) and drink copious amounts of Whiskey to try and deal with it all.

I’m sure indie developers the world around have similar phases of self-doubt and worry. My writing this is more designed to illustrate how utterly detrimental it has been for me to have a (hereditary I think) depression crippling me at various times throughout the development. And it’s not going anywhere. The medication and therapy has helped to stabilise me to a large degree, so I don’t find myself struggling to eat, sleep or get up at this point. But by and large, the way I’ve been coping is to be honest with myself about what I’m going through, make sure to communicate it to Rohan and to those who can help me, not put so much time into the game that I lose a sense of perspective (which, as any developer will tell you I’m sure, is very easy to do) and just learn not to have unrealistic expectations when I’m enduring a low point. To work for just an hour or two in a day if that’s all I can handle and not try and force productivity where there can’t be any. All that does is strain what’s left of my ability to handle stress.

There is no sure-fire way through this. I’m just having to rely on those around me to keep me sane and optimistic. I’m severely more likely to take any mild criticism to heart right now.

The fun part, I guess, will be when it’s time for our work to be considered ‘final’ and we actually do have reams and reams of genuine criticism to wade through.

So I guess I can only hope that I’m in a better place than I have been when the time comes.(source:gamasutra)