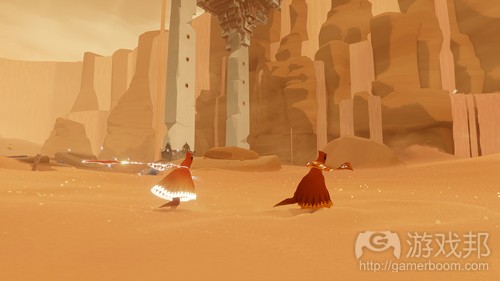 The journey to create Journey — the quest for emotion

ThatGameCompany’s Journey is one of those rare games that targets an emotional experience and actually hits it. This is no accident though, it was a laborious process to go from the initial concept to a game that actually affects people in legitimate ways.

“If you look at genres of films, they’re all divided by emotions,” said Jenova Chen during his talk at the DICE summit, from which the above early concept art is also taken. “But when you look at video games, what feeling do you get? It’s usually a feeling of accomplishment.” That’s what games can do that movies can’t, he says.

And with Journey, he wanted to marry that feeling of accomplishment and empowerment with online gameplay that would make players care about each other. Journey, as an idea, started in 2006. At that point he had been playing World of Warcraft for 3 years. “I’m a kind of nerdy guy who doesn’t like to leave the house,” he admitted, but he still wanted to have some social interaction. He tried to do this in WoW, but all the online chatter was about the game – nobody paid attention to each other. “The more I played this game, the more I encountered other players, the more I realized I was lonely,” he said.

“At that game company, we start with emotion, and we work everything around it,” he says, and for Journey, they were aiming for a feeling of awe, of catharsis, in an online world. Chen began by doing research into how people play online. “What I hear the most is online gamers are mean,” he says. “Most of them are assholes, you don’t want to talk to them, you don’t want to interact with them.”

In most games, the character carries something that represents power – gun, a sword, or something similar. Then you gain things that give you more power. It’s a power cycle, Chen says. The first thing you think in a game is, “How am I going to use my power over this other thing?”

To take the focus away from power, and away from contact, you have to make people in games really pay attention to each other. “I want the interaction to be about exchange of emotions or feelings, rather than exchange of blows,” says Chen.

To do this, you have to get rid of all the noisy stuff that distracts players from each other, like big background events and environmental noise. “Then we have to get rid of the power,” he says. “If I’m in a room online with another player, and I have a gun, what am I going to do?”

You then remove some of the other players, to make it just a journey between two people. “All of a sudden, the other player becomes the focus,” he says. But then you have to make these players actually feel an emotion. It’s tough to get players to focus their attention! So they made sure there was no HUD, and for online play, “our first goal is there is no lobby,” he says. “Second thing, in most games everybody has names and IDs. And most peoples names are very aggressive.”

So they removed all of that, just showing who you’ve played with at the end of the game, and didn’t allow players to talk directly, or even invite friends. “It’s very counter to a lot of these online conventions, and maybe we’re giving up the chance to be viral, but we had to focus on the emotion we wanted to present,” he said.

The next step was to get people to cooperate. They had a resource in the game that allowed you to fly a short distance, but they weren’t sure how to use it in this kind of online world. At first, resources were limited. “People said they don’t want to play with other people, because maybe they’ll take the resources,” he said.

So they tried making the resources re-usable — the resource would drop after one player used it, so another could follow behind and use it as well. But people felt like they were getting taken advantage of when others used their resources. Finally they made resources unlimited – then players didn’t hate each other, but they didn’t like each other.

One idea they had was to get people to push and pull each other so they can collaborate, climbing rocks and so forth. But people pushed each other into the abyss to kill each other. So they took away the physics — and now, when you get near to each other, you both get energy, a distribution of resources. You can fly if you’re together. “And then you love each other,” he said. “It’s very simple, but it was not very intuitive. It took us a lot of time to get to this conclusion.”

“To reach catharsis, in Hollywood they use the three act structure,” Chen notes. “This huge change of emotional intensity, this creates catharsis.”

But if you want a catharsis of awe, how do you achieve that? Chen also studied Joseph Campbell’s hero’s journey monomyth theory, and layered in its structure of transformation. He then layered in the actual life cycle of a human. He found that these three things all overlayed perfectly, and now he had his structure and arc. In fact, when charted as a wave graph, the team used this to create the general topography of the world.

It’s easy to get musicians and artists to communicate emotional levels, he says, but it’s very difficult in interactivity. And in the first year, the game sucked. They didn’t actually get the emotional intensity they wanted. “People hated it,” he said. “They would say the end is terrible. This game sucks.”

“The emotion of change, from the mountain to the summit is so small, it’s actually less exciting compared to the ruins level,” he said of the game at the time. But a revelation came when a player whose game crashed right at the end enjoyed himself more. “It’s because there’s a drastic fall,” Chen realized. “It’s kind of a great ending of a tragedy.”

At this point he realized they had the option to ship the game like this, or spend another year to fix the ending, to create this catharsis. They were lucky enough that Sony allowed them to take that extra year.

In terms of changes, originally people thought the mountain section was tedious. They put in an entire new animation set, to make the player feel a bit more oppressed. Then they took other things from the background, like the flying stone serpent, and added buildings to hide in, “turning atmosphere into real gameplay,” he said.

“Even with the death scene, we added things like actually fading out the mountain, to take your hope away,” he said. All these little things combined to make it feel much more engaging.

But the final summit was still on rails, with no option to stray from the path. “What happened is that even though the game looks epic, it doesn’t play epic,” he says. “There’s no freedom on the summit when you’re confined to a rail. So what we did was open up the rail. Players can go anywhere. We also added the surfing back,” he added. “We make sure everything before you reach the final end is completely playable, including the final walk toward the light. We give them freedom until the very end.”

And it paid off in the final product. In fact, it became so well-honed, that the final design document was a single graphical sheet. “We launched the game, and it’s about the Journey of a lifetime,” he asserts. “I was particularly nervous about how people were going to react to this game.”

But right away, people started apologizing to each other, posting on the TGC forum to apologize for quitting the game, and so forth. “I would never imagine a Call of Duty player would say this,” he said. “People like to draw hearts in the snow at the end of their game to show their gratitude,” he added.

“A lot of people in our studio were not paid in the last half year, and we paid out all our savings,” Chen says. The company actually went bankrupt, at the time. “Was it really worth all this,” he posed? Chen offered up this letter as an answer to that question. (source:gamaustra)