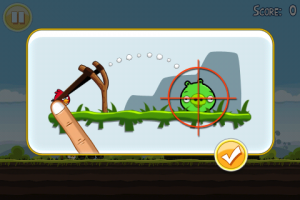 A mobile-phone game in which birds are catapulted into castles occupied by green pigs is the top-selling paid-for game in Apple Inc.’s App Store right now in the U.S., the U.K. and a host of other countries, and the most popular game on Nokia Corp.’s N900 smartphone.

The game, “Angry Birds,” was created by Finland’s Rovio, whose Chief Operating Officer Niklas Hed and two others won a mobile-game development competition sponsored by Nokia and Hewlett Packard Co.

back in 2003 when they were students at Helsinki University of Technology.

“Angry Birds” has generated about 2.35 million paid downloads since its launch in December, Chief Executive Officer Mikael Hed, Niklas’s cousin, said in an interview. It costs 99 cents, of which Rovio gets 70% based on its revenue-sharing agreement with Apple, minus what it pays its publisher, ClickGamer.

“‘Angry Birds’ will generate quite good profits for the company as long as Apple’s iPhone sales continue to grow at the current pace,” he said, particularly as sales of high-priced boxed games fall and gamers generally become more price-sensitive.

“Mobile gaming will replace a lot of the traditional gaming,” said Mikael Hed. “People who are getting an iPhone, for instance, are rapidly getting rid of their home computers because they can check their mail and the Web, and play games, on their phones.”

Total sales of smartphones, which have open operating systems that allow for downloads of externally developed applications, surged 50% to 54 million phones from a year earlier in the first quarter, according to Strategy Analytics. Research firm Gartner forecasts end-users’ spending on mobile games will more than double to $11.4 billion world-wide by 2014 from $5.6 billion in 2010, a huge growth market for developers like Rovio.

The company, which currently has 17 employees, is looking for new staff to help out with its expansion plans, which include “Angry Birds” for new platforms such as Android-based mobile phones and new updates to the game to make sure it stays on the App Store’s top list, Mikael Hed said.