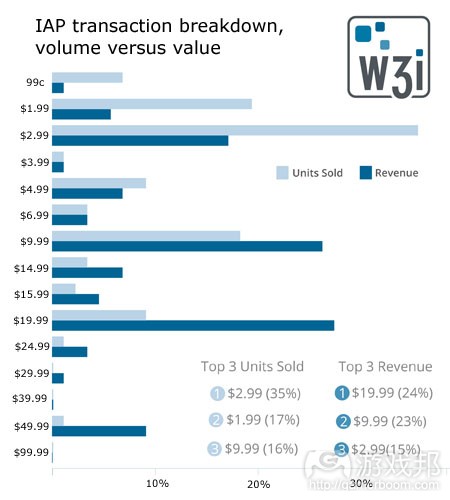 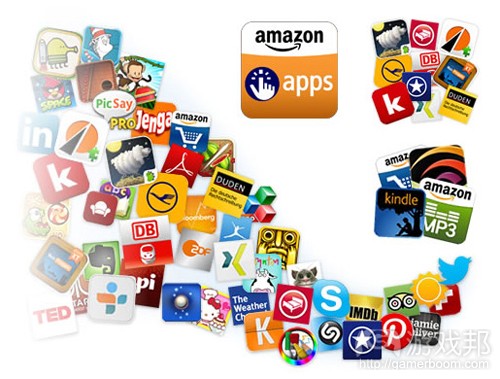 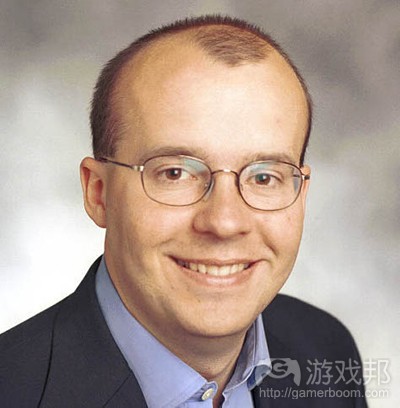 With the top grossing charts in 2012 ruled by free-to-play games, it’s no surprise that in-app purchase are industry’s key driver.

However, according to research from monetisation experts W3i, not all IAP are equal.

As has been previously suggested by individual developers at an anedoctal level, most revenues are being generated by transactions of $9.99 or more.

Transactions from $0.99 to $1.99 only contribute an average of six percent to total game revenue.

The research was based on data from hundreds of W3i’s partners, accounting for 66 million monthly active users across iOS and Android.

Looking down at how the data varies between countries, W3i found that the UAE and Japan were the most lucrative markets.

55 percent of revenue in the UAE came from $19.99 transactions, while it was 43 percent in Japan.

$9.99 was the key transaction amount in Canada and China, respectively making up 33 percent and 29 percent of revenue.

2）Amazon’s Appstore is on fire: 500% more downloads this year

Even without a platform of its own, Amazon is doing just fine when it comes to mobile apps. The company announced on Thursday that “[a]pp downloads in the Appstore have grown more than 500 percent over the previous year.” The two biggest drivers of such growth are likely to be Amazon’s Kindle Fire tablet line, introduced in September 2011, and strong developer support for programmers to create compelling Android applications for Amazon’s tablets.

While Amazon has had its own Appstore for Android devices since March 2011, I suspect most of the growth came from Amazon’s own mobile devices and not Android smartphones or tablets made by others. A few phones have come with the Amazon Appstore pre-installed, but most do not. That means consumers have to learn about Amazon’s storefront on their own and then install it themselves. Google’s own Play store is central to the Android experience, which is a potential barrier here.（source：gigaom）

And Android is the top operating system with a 52 per cent share of impressions.

Mobile ad network Millennial Media has released its latest Mobile Mix Report, which shows that Apple was the leading OEM for ad impressions in Q3 with 31.5 per cent share, while Samsung, HTC and RIM rounded off the top four with 24.3, eight and 7.9 per cent shares, respectively.

However, Google’s Android was the number one OS for the quarter, with a 52 per cent share of impressions, followed by 34 per cent for iOS and eight per cent for BlackBerry. In fact, Android powered 15 of the top 20 ad-serving mobile phones.

Gaming apps were the number one source of in-app ad impressions for the second consecutive quarter, with music and entertainment apps remaining in second. Meanwhile, communications apps climbed from fifth to third, while productivity & tools and dating entered the top ten in fifth and tenth spots, respectively.

Three-quarters of all impressions came from smartphones and five per cent from feature phones, but 20 per cent came from non-phone connected devices (tablets and e-readers etc) which is a six per cent year-on-year increase.（source：mobile-ent）

Anyone who’s been around the mobile games conference scene for any length of time will have likely heard a talk from Nicholas ‘Freemium’ Lovell.

The consultant was happy to expand his perceived remit, though, at the Mobile Gaming Europe conference in London.

“I’m not a freetard. I’m not completely obsessed by free,” he said.

“Paymium is fine if you have enough marketing resource to overcome the friction of your game being paid.”

His wider point is that to be successful in the games business, you need a very large audience and being free is the easiest way to generate this.

Yet, maybe the surprising fact is despite these large audiences, only a tiny proportion of them are valuable in terms of generating direct revenue.

For example, German browser game publisher Bigpoint found that in one game Dark Orbit, 0.02 percent of its audience was generating the majority of its revenue.

‘People don’t pay for content but they will pay for status,’ Lovell stated.

Of course, this argument is the basic construction of the so-called ‘whale’; that is a player who will spend hundreds of dollars because they love your game so much.

There’s much argument about just how big whales are.

Lovell’s working definition is that ‘whales are the users who make up 50% of your revenue’, although pointing out that such players are likely best defined by their behaviour, not by the hard spending patterns.

Still, anecdotal evidence states that some games companies have player – often labeled as professional soccer players – who are spending $1,000 daily for months or even years.

Similarly, it’s said that in China, some game companies have physical VIP support stores for their games that are only available for players who have spent more than $100,000 (or perhaps $1 million – it’s China, so no one knows right?).

Yet, moving on from whales, perhaps the better definition is ‘True Fan’ – the people who spend a lot of money and also act as evangelists for your game.

“Whales might be the people who spend $100 in your game and regret it, while True Fans spend $100 and tell all their friends about it,” Lovell ended. （source：pocketgamer）

A new report from mobile ad network Chartboost suggests that while the iPad is the best platform in terms of getting return on advertising spend for mobile game developers, the iPhone is still seen as the marquee iOS platform for mobile games, since it commands an impressive 61 percent of all gaming time spent on iOS devices. So despite lower acquisition costs on iPad (and iPod touch), advertisers are still willing to pay more to gain access to the much broader audience of iPhone gamers.

iPad owners are more than twice as likely (113 percent more likely, to be precise) as people playing games on iPhone to respond to interstitial ads and purchase new gaming titles based on that marketing channel, Chartboost finds, and iPod touch owners are more than 85 percent more likely to do the same. Why the gulf? It’s hard to know for sure, but it’s possible that users spend a much greater percentage of their time on iPads and iPod touches playing games than they do on their phones, since those devices come in Wi-Fi-only flavors that are often used more exclusively for entertainment purposes compared to a smartphone.

Still, the iPhone wins by session volume, grabbing the most eyeballs overall, and it leads by a wide margin, too. It has 5 times the gaming sessions of iPod touch, for instance. The iPad has more than double the gaming sessions of the iPod touch, but still less than half those on the iPhone. So even though the cost-per-install advertisers have to spend on iPhone is around 12 cents more on average on iPhone than it is on iPad, it’s likely seen as a fair trade in order to potentially get much greater download volume.

Chartboost thinks that there’s an opportunity here to make smart investments on iPad-specific marketing campaigns, especially for teams with a smaller budget that might face a lot of competition with other similar titles on the iPhone. Pushing for iPad customers might mean grabbing a bigger chunk of users early on for less than you’d pay to get the same number on iPhone, and there’s also higher average revenue per user on iPad to keep in mind. That means that free-to-play titles could actually stand to gain more revenue overall with less initial investment by targeting a smaller audience on iPad, vs. the larger pool of potential users on iPhone.（source：techcrunch）