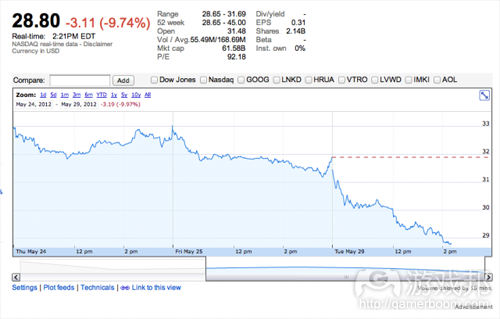 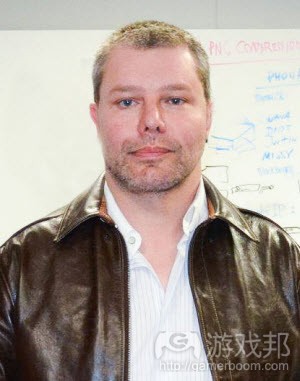 1）Facebook stock sinks even more, finishes the day down nearly 10%

Facebook’s stock on the Nasdaq exchange dropped by about 9.6 percent in regular trading Tuesday, a steep drop from its original IPO price of $38 a share.

The massive social network debuted 11 days ago and since then, the stock has sunk on news that Facebook botched the IPO process, misled mom-and-pop investors, and is fighting perceptions that the stock is overvalued in light of diminished growth prospects. Today, options trading began so investors can place different kinds of bets on the stock. The Wall Street Journal reports that some investors have placed options bets that Facebook would “jump to $65 a share by January 2014, while others betting on a slump to $16 a share by December.”

Take a look at the chart below to see Facebook’s big dip today.（source:venturebeat）

Pain, pain, and more pain for Facebook’s stock. Facebook sunk into the $20s for the first time today, declining about 9 percent as options trading started. The decline also came a day after a third wave of reports came out about a Facebook phone, which would push the company into the risky and expensive world of building hardware.

The key factor affecting share prices might be options trading. Bloomberg said that puts are exceeding calls by 1.3-to-1. Puts give investors the right to sell stock at a certain price while calls give them the ability to buy stock at a given price. Puts increase in value as shares decline. Bloomberg said the June $30 puts were the most-active contracts.

Like I said in a story from late last night, analysts reduced their estimates for the second quarter and I am also hearing from sources that the third quarter will be soft too. Facebook will need to boost revenue streams outside of display advertising on its own site to get shares back up. There are lots of possibilities. We could see Karma turning into an interesting gifting revenue stream, improved search becoming the basis of Google-like advertising, an Adsense-like display advertising network across the web and an expansion of payments and Facebook Credits outside of social gaming.

**It looks like everyone is coming up with a different market cap for Facebook. Google and Yahoo Finance report Facebook’s market cap as being around $62 billion. The Wall Street Journal is saying that Facebook’s market cap was $80.4 billion on today’s low. I called around to sources who facilitated the offering and the correct number of shares to use is 2.74 billion.

Multiply that by the current price and you get the market cap (which is different from the incorrect numbers that Yahoo and Google Finance are reporting).（source:techcrunch）

Zynga’s lockup on the ability for employees to sell stock in the aftermath of its initial public offering expires today. That may explain why a smaller company, Game Closure, has been able to recruit a prominent mobile gaming expert from Zynga.

Meanwhile, Zynga’s stock continues to drop, falling to $6.15 a share, down 7 percent, in trading this morning. Zynga went public at $10 a share in December and its stock rose to a high of $15.91 a share after speculation that the company could benefit from online gambling legal changes. But after Facebook’s botched IPO, Zynga shares have steadily fallen. And today, employees will be able to sell an estimated 325 million shares.

Desegur will lead all of the mobile initiatives related to the company’s game engine development.

“I vote with my feet. After first-hand experience with the Game Closure software development kit (SDK) and the people behind it, I knew that I had to be involved in the growth and refinement of the team and technology,” said Desegur. “Game Closure is building technology that radically enhances the quality, development speed, and availability of games on mobile. I believe these tools are essential to build beautiful, frictionless social games which can compete in today’s market.”

In the first half of the year, Mountain View, Calif.-based Game Closure has received applications from more than 5,000 studios and its daily user data produced by partner games has grown 1,000-fold. Game Closure is run by Michael Carter, 27. The company says it has received multiple acquisition offers (and presumably turned them all down) including one from Zynga.

“I knew that we would end up working together from the moment I met Laurent at Zynga,” Carter said. “We were in sync on everything — from the direction of the mobile games industry to the best practices for HTML5 mobile technology. Laurent is a world-class engineer and an exceptional, time-tested company builder.”

In the aftermath-analysis about what exactly happened in the Facebook IPO, and what it might mean for the future, here’s one side-effect to the east of Nasdaq: Vkontake, the top social network in Russia, which shares a shareholder with Facebook, Mail.ru, has decided to delay its own IPO.

The news was confirmed by the company’s CEO  Pavel Durov on Twitter. In Russian, he tweeted, in answer to a Russian journalist’s question about the planned IPO date, “It’s not planned.

The IPO of Facebook has destroyed the faith of a lot of private investors in social networks and the IPO of VK has now been postponed indefinitely.”

The news appears to be the first big decision taken by Durov after, according to Reuters, 40 percent of Mail.ru shareholders voted in favor of Durov making key decisions about Vkontakte.

Now, although Durov will be in the driving seat, he will collaborate with Mail.ru on “a range of issues facing Russian internet companies amid increasing global competition.” Together the two own 52 percent of Vkontakte.

The original plan had been for Vkontakte to list sometime this year or next. That was before the Facebook listing — which failed to achieve a “pop” after being listed at $38. It is currently trading at just above $30.

Vkontakte currently has 110 million users, with about 70 percent of those in Russia.

While it might look like Mail.ru’s stepping back from control at Vkontakte may also be linked somehow to the performance of Facebook on the public market, that may not be the case.

The Reuters story notes that in fact Mail.ru has been trying to get full control for ages and offered to pick up a majority share that would have valued the company at $3.75 billion, but it was rebuffed by Durov and other founders. “Mail.Ru has made no secret historically that it would like to take control of VKontakte,” Renaissance Capital media and IT analyst David Ferguson told the news service. “This has not happened, as the price expectations are a million miles apart.”

Dmitry Grishin, the CEO of Mail.ru, last month told TechCrunch that the company was focused on three key content areas: gaming, mail and social, with monetizing coming primarily from advertising and virtual goods. One-third of the company’s revenues come from gaming, Grishin said. The company has been working on exporting its games outside of its existing footprint, but this is still a new strategy: right now revenue outside of Russian-speaking markets, Grishin said, is “close to zero.”

In Russia, sites like Yandex and Vkontakte have respectively come to dominate search and social networking, leaving world-wide leaders Google and Facebook in challenger positions. “The competition is too strong,” explains Grishin.（source:techcrunch）

Zynga Bingo dominated this week’s list of fastest-growing Facebook games by monthly active users, taking the No. 1 spot with a 2.8 million MAU gain for a 296 percent increase.

Zynga also secured the No. 2 spot with its recent bubble shooter Bubble Safari, up 1.2 million DAU for a 109 percent bump. PlayQ’s Bubble Blitz landed the No. 3 position, with 900,000 MAU and a 75 percent increase. King.com rounded out the top five spots with two of its “Saga” games. Pyramid Solitaire Saga brought in 900,000 MAU, growing by 35 percent and taking the No. 4 spot. Candy Crush Saga, meanwhile, snagged the No. 5 spot with 700,000 MAU and a 15 percent gain.

Four other games showed gain percentages greater than 20 percent. Peak Games’s Lost Bubble increased by 500,000 MAU, showing a gain of 60 percent. Ubisoft’s House M.D.: Critical Cases acquired 180,000 MAU, an increase of 35 percent. Ludia’s Smarter Than A 5th Grader — based on the popular game show that ended in 2009 — gained 170,000 MAU and grew by 33 percent. Finally, Ubisoft’s Rabbids Invasion bounced up by 120,000 MAU for a 24 percent increase.（source:insidesocialgames）