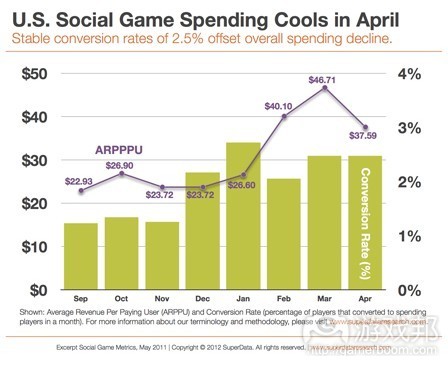 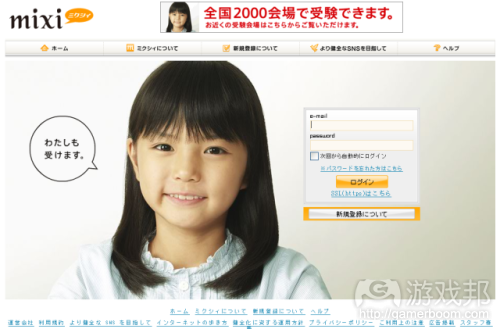 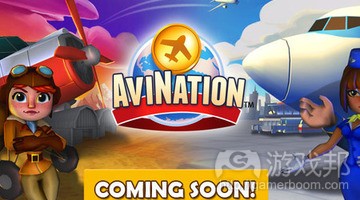 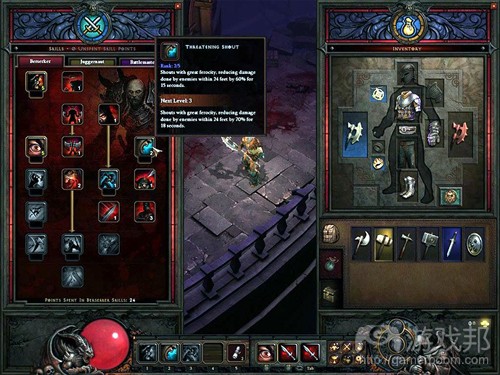 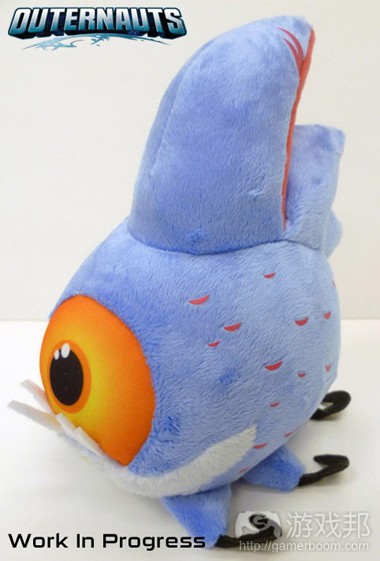 Social gamers are becoming more comfortable with their surroundings, but that doesn’t necessarily mean they spend more in play.

That’s the finding of the latest monthly report delivered by SuperData, which claims the average paying social gamer in the US spent $37.59 in April.

Despite this decline, however, overall conversion rates into paying players have risen, with 2.5 percent spending in game.

That’s up from 1.4 percent a year previously.

A place to play

SuperData also notes a switch in the types of social games players are willing to spend in.

Farming games are on the decline, the firm reports, while strategy and combat games yield more than three times as much from paying users.

Region by region, the firm predicts North America will generate $1.8 billion in 2012, ahead of Europe on $1.4 billion.（source:pocketgamer）

Nikkei Business Online is reporting that Kenji Kasahara is ready to sell his 55% stake in Mixi (it’s not unusual for Japanese CEOs to hold such a large percentage of their companies, even after multiple rounds of funding and an IPO).

To make it clear: this is just a rumor at this point, and Japan’s largest real-identity social network just issued a one-sentence press release denying the report is true.

If true, this wouldn’t come as a big surprise. Mixi has been losing ground to Facebook at a fast clip since the fall of last year. Between September 2011 and March this year, Facebook Japan managed to double its active user base from 5 million to 10 million.

The active user base of Mixi is standing at 15 million MAU and hasn’t changed in the last few quarters.

According to the Nikkei report, social gaming giants GREE and DeNA are likely to bid for the CEO’s stake in the company when the stock will be shopped around in the next few days.

Mixi is “closer” to DeNA than GREE. Just two months ago, the two companies opened a social commerce platform within Mixi together, for example (and there are more examples).

What’s interesting for both companies is that Mixi is clearly a mobile social network, as over 80% of their roughly 30 billion page views come through mobile devices. Another example: the number of smartphone MAU shot up from 3.8 million in July last year to over 7 million in March 2012.

Games on Mixi, however, have been a disappointment, financially speaking. Mixi managed to more than double sales coming from social games on their platform between Q4 of FY2010 and Q4 of FY2011 (like Facebook, the platform takes a cut from 3rd-party game providers). DeNA and GREE, however, are making more money in a few days through games than Mixi does in an entire financial quarter.

The biggest obstacle should be that Mixi has a different value proposition: Mixi offers a “tight” and real social graph (users usually have only a few dozen Mixi friends – and they are usually their friends in real life). It’s a “pure” social network, unlike GREE and Mobage (see here and here for how I outlined Mixi in the past).

If the report is true, I don’t think that Facebook would be interested. They are currently “winning” in Japan anyway.

Other companies that I can imagine looking at a possible Mixi deal are  Yahoo Japan (the country’s biggest website offers many horizontal web services but failed miserably with social networks so far) or one of the country’s mobile carriers (which are getting more active in the content business as of late).（source:serkantoto）

A newly-formed free-to-play studio, made up of former key staffers from big name companies such as Electronic Arts and Sony Computer Entertainment, is being funded by Japanese developer and publisher Marvelous as part of its international business strategy aimed at the rapid growth of social games.

The Costa Mesa, California-based Checkpoint Studios is headed by Brian Wiklem, who previously held producer roles at SCE, EA, Shiny Entertainment and Heavy Iron Studios. The studio is looking to develop cross-platform social games, and will release its first game AviNation next month via Facebook.

Checkpoint plans to then expand the aviation title, built using the Unity 3D engine and the studio’s own Boomerang technology, to smartphones and tablets later this year. （source:gamasutra）

Though Microsoft and Sony haven’t revealed any details of their next-generation consoles to the public yet, Ubisoft says it’s preparing to take advantage of expected social game features in the platforms.

The publisher predicts that console makers have paid attention to the explosive growth and success of social games in recent years — particularly the free-to-play business model — and accommodated features from that space on their next-generation systems.

“Ubisoft is positioning itself to capitalize on the forthcoming arrival of the next generation of consoles which will be increasingly connected and will strongly boost the market thanks to a new qualitative leap and the integration of social games benefits and the item based model,” says CEO Yves Guillemot.

He continues, “These major opportunities will enable us to extend our global reach, increase our average revenue per user (ARPU) and therefore raise the profitability potential of each of our brands.”

The company also predicts strong growth in the free-to-play market for PCs, smartphones, and tablets. Guillemot says Ubisoft has prepared for future opportunities by ramping up the online expertise of its teams, as well as recruiting and acquiring talent with online experience (e.g. Howrse creator Owlient).

Ubisoft’s online and digital segment has become a critical segment for the company — it generated €80 million ($102.3 million) from sales in that category during it last fiscal year (ending March), an increase of 110.8 percent, thanks to free-to-play titles like The Settlers Online and Howrse.

David Polfeldt, managing director at the publisher’s subsidiary Ubisoft Massive, recently talked with Gamasutra about his expectations for next-generation consoles. He agreed with other developers that console makers need to make their platforms more open so studios can update their games on the fly, as they can with web and social games. （source:gamasutra）

Alongside today’s launch of Diablo III, Blizzard has introduced the series’ first ever official Auction House, where players can buy or sell items for real-world currency. With this new system, Blizzard will take a cut from each item sold, but despite the obvious financial gains, the game’s director says the Auction House came from the game designers, not the business side.

“[The new Auction House] came from the design department,” Diablo III director Jay Wilson tells Gamasutra in a feature interview, “Here’s one of the things that I will say — that no one in forums will believe me — but we never make business decisions outside of the game development team. We always make them based on what we think is right for the game.”

Wilson explains that designing a system that makes extra money isn’t a problem if it provides a real value to the consumer. If the players are happy and Blizzard is making money, it just means the studio can keep making bigger games, he says.

The new Auction House made particular sense to the design team, Wilson adds, because Diablo II eventually developed its own consumer-run item economy, where players would buy and sell items through eBay or other third-party websites.

“The whole trade economy of Diablo II was a really interesting element of the game, but the game didn’t support it hardly at all. And so we looked at that and said that’s a real failing, and something we need to fix,” says Wilson.

Thus, the team built the Auction House directly into Diablo III, giving players the opportunity to sell their items in a secure environment that aims to limit scams and other illicit behavior.（source:gamasutra）

6）How will Insomniac’s Outernauts be the next Angry Birds? [Interview]

“Actually, we’re making plush toys for this game,” Insomniac Games CEO Ted Price reveals. When Insomniac’s first Facebook game, Outernauts, launches this summer, so will a series of plushies based on the social game’s key characters. But unlike Angry Birds and more like Activision Blizzard’s Skylanders, these plush toys have a purpose.

“Basically, there are five different beasts that you can pick at the beginning of the game,” Outernauts designer Rowan Belden-Clifford elaborates. “Each of the plushies that we’ve made is one of the five starter beasts, so buying these is a way that you can get more starter beasts than the one you’ve chosen.”
The idea behind the push, Insomniac Games brand development director Ryan Schneider tells us, is to expand the game’s universe in a way that benefits the player in-game. Such a strategy has worked with Rovio’s seminal Angry Birds franchise–albeit with less cross-media flair–but the Finnish developer casts a much wider net than Insomniac looks to with Outernauts.

“I kind of see us going for myself as the audience–I’m 23 years old and I’m a console gamer primarily, but I’ve also been playing a lot of Facebook games over the past year or two,” Belden-Clifford admits. “And it’s something that I’ve seen a lot in my own friends group, starting to play Facebook games during lunch breaks at work and having as much enjoyment out of those as their favorite other games.”

In short, the studio has it sights on the 13 to 25-year-old demographic, an (perhaps slightly older) audience that developers Kixeye and Kabam have tapped rather successfully with their strategy-heavy war games on Facebook. But will a similar player base latch onto Outernauts and its plush toys? That depends upon whether the game packs fun and depth, ultimately.

“I think it boils down to bringing our console game experience to a new platform, and making a game that has real, core fun gameplay at the center of it,” Belden-Clifford says. “It’s something we’ve always been known for at Insomniac and I don’t think Outernauts is any different.” And to Price, that’s what will keep Outernauts in the backs of players’ minds this summer and beyond.

“I think number one is fun. You have to create an experience that’s entertaining, is engaging and keeps you thinking about the game frequently because of the story, the options that players have to continue improving whatever it is they have in the game. In our case, we have a lot of RPG [role-playing game] elements in terms of character evolution–the creatures that you capture. It’s a lot of fun to watch your creatures evolve, get stronger and earn new abilities. That’s one of the things that keeps me, as a player, coming back to the game.”（source:games）