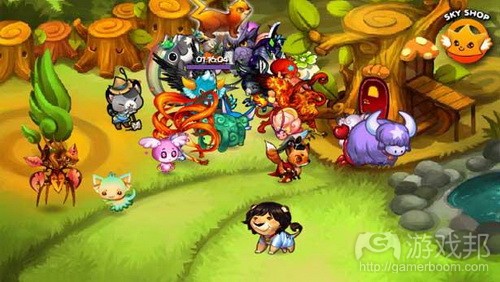 Looking at the explosion of social gaming and consequent attention devoted to it by industry and press, it would be easy to say that games have come full circle. For thousands of years, games were inherently social, and played with friends. Then computers came along, and with them two decades of mostly lonesome play in darkened bedrooms, until broad adoption of the Internet reversed this trend. The Internet gave game developers the opportunity to pit players against faceless and unnamed human adversaries, although playing with friends still required complex operations such as inputting Xbox Live gamertags or Nintendo’s ad hoc Friend Codes. Finally, social networks provided games with access to the “social graph”, a representation of real-life acquaintances of players, and used this to champion game mechanics based on co-operation and mutual back-scratching, rather than on direct competition (the fact that those mechanics are often a thinly disguised front for increasing game virality could be the subject of a separate article).

A simplistic view of this evolution, then, could support the notion that playing games solo and with strangers were only phases in the evolution of games, and that technology finally brought gaming back to where it belonged: a social activity best experienced with friends. The reality, however, is more complex, and mobile gaming is where this is most evident.

Mobile gaming has emerged as one of the most dynamic and fastest-growing segments of the industry, thanks primarily to the combined might of iOS and Android, with a userbase of around 500 million potential players, most of whom are new to our favorite pastime. At the same time, while the early years of mobile games were principally singleplayer experiences, the “always-on” nature of smartphones has allowed a transition into social, connected entertainment. This combination of factors – and the predominance of Facebook as the provider of choice for players’ social graph, at least in Western markets – means that the most natural approach for mobile social gaming is that it’s connected to Facebook.

But while Facebook’s surely a very important component of the space, it’s by no means the whole story because it turns out that many players are choosing not to divulge their real identity when playing, and choosing not to connect with friends. They might be worried about their privacy, or they might want to avoid their friends knowing that they are playing games all day; in any case, a different approach is needed for those players, an approach that becomes evident when looking at the history of gaming.

Before the “social graph”, there was the “interest graph” – a fancy way to say that because people find playing games with or against each other fun, that alone constitutes a common interest on which an extremely compelling game experience can be built. In short: Player 1 wants to play a game; Player 2 wants to play the same game; Player 1 and Player 2 don’t know each other personally, but share the same interest in playing and possess roughly equivalent skills. There you are: a match made in Heaven. Or at least a match made daily, millions of times, in online FPS or other competitive games.

What we are witnessing, and what the wealth of games available on smartphone platforms exemplifies, is a gaming ecosystem that’s growing to accommodate the three primary forms of gaming: playing alone, playing with friends, and playing with strangers. Naturally, different game genres and platforms might be better matches for each of those experiences, as demonstrated by the contrast of hardcore web strategy games, which are usually played against strangers, and Facebook social games, which are played with friends.

Where it gets interesting, however, is where the social graph and the interest graph collide, giving birth to interesting and innovative game experiences. On Facebook, for example, a new breed of games are relying on the social graph to drive gameplay and virality, but are introducing features that allow players to interact with users they don’t know personally. Monster Galaxy (pictured) has a Pokémon-like structure and allows players to fight against other players’ monsters in a PvP arena, for instance. And Idle Worship, recently launched on Facebook, introduces interaction with people you don’t know before putting you in touch with your friends. These games have their players developing in-game relationships with strangers, often eventually adding them to a “friend list” which is game-specific and separate from their real-life social graph.

This hybridisation will result in games that implement what can be called an “augmented social graph”, meaning that the game relies primarily on the interaction with friends for gameplay, but complements it with the opportunity to interact with strangers. And vice versa, other games will rely on an “augmented interest graph”, making competition with strangers the core of their game experience, but allowing players to introduce their social graph in the mix. Play against strangers and get friends to help you? Play with friends and make new ones? Meet friends of friends through play? All of those options are and will be available, often mimicking the way in which relationships are formed outside of gaming.

We’ll be still playing alone, but less so. We’ll be playing with friends, increasingly. And we’ll be playing with strangers, some of whom will become friends as a result of the experience. Coexistence and cross-pollination of those experiences, rather than prevalence of one over the others, will make gaming more interesting, varied and, in a sense, much more like real life.（Source：edge-online）