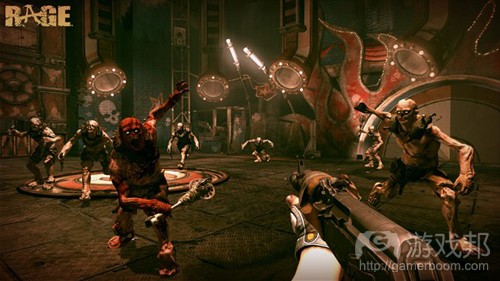 I’ve been pretty busy lately and my roster of freshly shrink-wrapped games has been growing larger each month. After some unfortunate car trouble I was confined to my house for the weekend, and what better way to wait out the weekend than to break open one of those games? The game that sat on the top of my stack was Rage, a title that took a lot of crap for its texture issues and questionable ending. This is one id-fan’s opinion of Rage and how small tweaks could have changed its reception.

The Elephant in the Room

Say what you will about the texture streaming, Rage is one beautiful game. id Software made a bold choice with Megatextures and their gamble was a simple one; when the question of dropping frames or dropping textures came up, idTech5 chose to drop textures. This choice clearly did not sit well with a vocal group who would rather play at 15 frames per second than 60 but I sometimes wonder if those same people really know what they are asking for.

I’ve played a lot of shooters in my time, but I can rarely play console shooters for more than 3 hours a day. I typically get very motion sick, something that I rarely experience if I can play it on PC at a frame rate of at least 60 or more. I just played a marathon of Rage on Xbox 360 and not once did I feel nauseous or ill from overexposure to jittery frame rates and jostling cameras. It was a silky smooth experience from start to finish. This alone was a rare blessing on the current generation of console where nearly all high production console games are running at 30 frames per second.

In a perfect world, the current consoles could display 4k resolutions and run 240 frames per second, and have a terabyte of 1THz RAM, and only consume 1 watt of power. This is not a perfect world, and tradeoffs had to be made.

That’s not to say that Megatextures are perfect. I recall an especially bad scene when first walking into Dead City, where the environment looked like it was vertex-colored and it never improved. I did find a large open canyon and spin my camera just to break it, but I would hardly call that normal behavior for your average game experience. Megatexture as a technology for the future has an uphill battle. Many gamers are predisposed to the way that textures currently pop in for most games. In most modern engines that use texture streaming, it is only used as a method of improving load times, not limiting resources that couldn’t possibly fit into memory. This shift is something that might take some time for gamers to accept and it is likely a technology might only be used in limited capacity by other developers. We may see something similar for large scale terrains or maybe character textures, but as a uniform solution, idTech5 may stand alone.

Man, I forgot how fun it was to play an id Software shooter. It has been a long time since id has released a proper title, and Rage is easily one of their most complete experiences to date. Every weapon and each type of ammunition feels like it has a specific purpose in the game. This combination of weapons and ammunition, mixed with the crafting system, allow for a fairly wide array of tactics. I may have my person gripes with certain items, like the turrets’ inability to take any kind of damage without falling over, but there are thankfully plenty of other recipes for destruction to pick from. Though I have nothing bad to say about the shooting in the game, there are kinks in this armor.

Everything in the game feels disposable, which I felt was a misstep. There was a missed opportunity to give the player some emotional connection to their items and their property. Any items that can be crafted can be easily broken as well. For most objects like bomb cars this makes sense, but I would have liked to see a little strategy put into turrets and sentry bots. I would have liked to reclaim my turret and place it elsewhere once it has served it’s purpose in one place. I would have wanted to reclaim a bot who is near death or perhaps spend money or feed it small objects to heal the bot at a lower cost than building a new one. This was a small but disappointing oversight.

Another issue of disposable goods was in the cars that the player drives. There was no reasonable excuse to keep giving the player new cars. They could have simply awarded upgrades to your only car to make it just as powerful, much like the weapons and their ammo types. I don’t know if it was possible to upgrade the first car to be as useful as the other vehicles but I also didn’t bother with many races. I can appreciate that the races are there for some people, but I earned my point by killing bandits and there never seemed to be enough racing tickets to upgrade the original vehicles to the same status as the gifted cars you received throughout the story.

Even knowing, from reviews, that the ending was cut short I was shocked by the sudden cut to credits. The first thought that came to mind was “where’s the rest of it?” And suddenly I understood why they called the game Rage. I was genuinely upset, and thankful that I bought it on sale much later after its release. I can fully understand why people would be so upset over the end of the game, but I did take some time give the ending a little more thought.

I don’t mind the ending of Rage now as much as I did when it happened. The game needed to end, it felt like the right time to close the books on Rage but I feel like they may have opened too many doors in the story. I feel like the large boss battle in Dead City was meant to be the real end to the game, but maybe they felt like the gameplay wasn’t long enough and set out to build another half of the game.

Another reason why I think there was some confusion about the ending is because everyone you talked to was leading you to believe that something big was about to happen. Elizabeth from the resistance quite literally said to expect something big which, in gaming language, translates to a final boss. You are even awarded a BFG which never gets used because you’ve stockpiled so many wingsticks and sentry bots by that point that you end up walking through the ending like a stroll in the park. Pimping out bots, turrets, and tossing EMP grenades like beads at Mardi Gra, you rarely find yourself in a life threatening predicament. I had a harder time fighting the Authority tanks outside the building than I did once I was inside.

So what could have fixed this ending? In my opinion, it could have been made less offensive if there was a “game+” mode, a way to continue the game, even if the story is done. Rage is a big world, leaving you with the empty feeling that you’ve left a lot of stones unturned. It would have been easy to assume that “stuff” was happening at all of the Arcs around the world but that doesn’t mean they had to happen for you in your little part of the world. You could have returned to town, gotten a few thanks from the locals and continued to take on side quests that were left alone, or finally relax and play a game of cards; you did your part to save the world.

Rage took me on a roller coaster of emotions, but strangely “rage” was a small part of the bigger picture. It was sad to leave the game on such a sour note but I still enjoyed the journey all the same. id Software flexed their shooting muscles in this game and its easy to see why fans still appreciate their attention to details when it comes to the gun-play, even if their story has some wrinkles to work out.

Overall, the experience was one of the best I’ve had this year. It wasn’t perfect, but the game was a visual eyegasm and the production quality was top notch. Every character had spoken dialog and handcrafted animations, hinting at the potential of a Fallout game but with the production quality of a Call of Duty. The environments were some of the best level designs I’ve seen from id Software in their history of making games, and the enemy encounters had just the right blend of mindless zombie types with tactical military classes. I am hopeful to see a Rage 2 and I can’t wait to see what idTech5 can do, now that the staff is well trained to take advantage of its strengths while avoiding its quirks. (Source: Gamasutra)