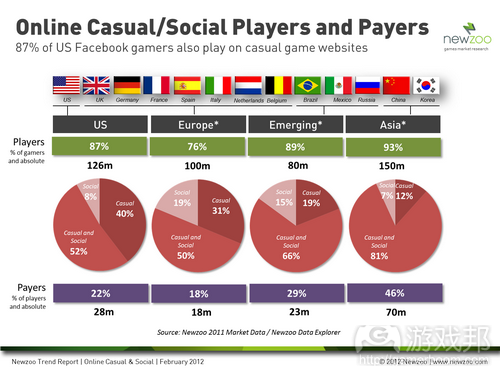 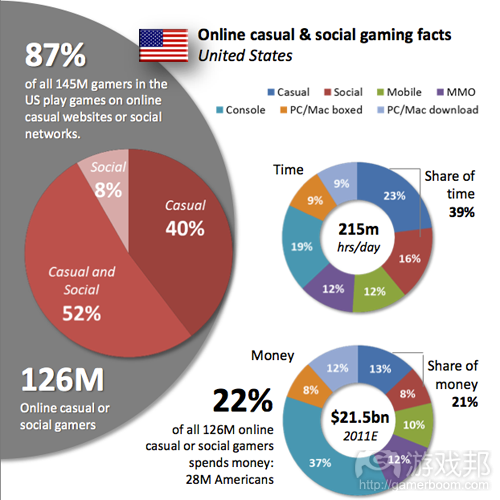 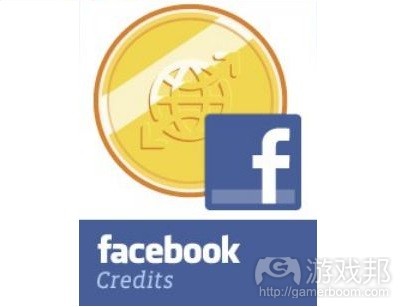 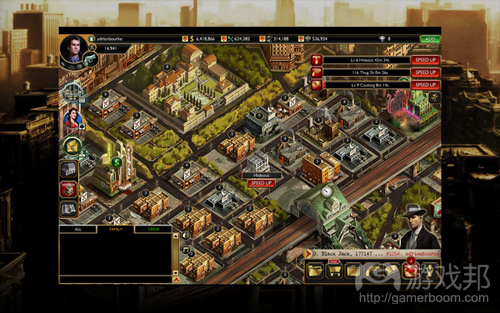 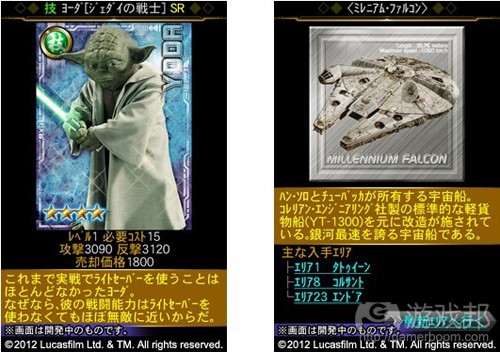 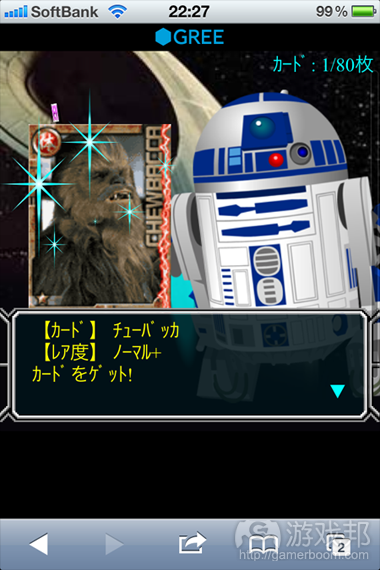 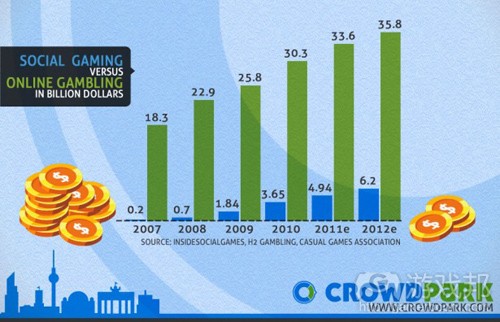 That’s, like, almost all of the American gamers. A report by Amsterdam-based games research firm NewZoo claims that 126 million, or 87 percent of the 145 million U.S. gamers aged 10 to 65 years old, play games on social networks (i.e. Facebook and Google+) or on casual game portals (e.g. Pogo, Miniclip and AddictingGames). And of that 87 percent, Facebook draws in 60 percent of them.

The mega social network also consumed 41 percent of those social casual gamers’ time spent playing as well as 38 percent of the cash they dish out for games. (Though, it is possible that this latter number is inflated by the minuscule percentage of social gamers that dish out thousands a year for their games, or whales.) But American gamers spend a lot of dough on these games overall, apparently.

According to the NewZoo report, 22 percent of Americans that play free-to-play casual or social games pay up for in-game goods. But here’s an interesting tidbit: A whopping 87 percent of Facebook gamers play on websites like Pogo and AddictingGames, too. That would definitely help explain why some skilled-based games, like Bejeweled or Tetris, are doing well on Facebook.

However, it could also serve well to explain why casino-based games are blowing up on Facebook. Games like slots, namely Slingo, had their own little home on portals like Pogo (and here at Games.com). If that many Facebook gamers really are fans of such games, then perhaps that explains why slots games are biggest trend on Facebook right now.（source:games）

Online casual game destinations attract an enormous and diverse audience and therefore can play a key role as marketing channel for any type of game. The websites have evolved from a purely advertisement-driven business to serious consumer monetization destinations, driven by the uptake of free-to-play business models. For social networks and game websites alike, you need to know the local champions and the profile of their audience to effectively benefit from the traffic.

That is one of the things we can help you with.

Example of a graph in the Online Casual and Social Games Trend Report:

Online casual and social gaming takes 39% of all 215 million hours spent on gaming each day in the US and 29% of money.

Share of time and money is comparable in Asia, Europe and Emerging markets except for the share of money in Europe which is considerably lower: 16%

22% of 126M US online casual or social gamers also spend money doing so.

The share of paying online players is highest in Asia (46%)

Only 8% of online casual or social US gamers spends all his or her online game time within social networks. This is higher in Europe (19%) and Emerging markets (15%).

87% of US Facebook gamers also plays games on casual websites.（source:newzoo）

Facebook’s mandated Facebook Credits system may be irritating to game developers now stuck with only one option, and third-party currency companies now struggling to stay afloat, but according to at least two law firms, they may also break U.S. antitrust laws.

The investigation comes as Facebook prepares to launch its $5 billion IPO this spring, and several weeks after the social network’s Credits system came under fire from some developers for causing lowered conversion rates (from free to paying users) and average revenues per user than expected.

Social game developers could previously use third-party virtual currencies in their titles, but last July Facebook began requiring developers to offer Credits for buying in-game goods — the company takes a 30 percent cut on all user purchases of Credits, similar to Apple’s arrangement with developers on its App Store.

Attorneys Derek Newman and Brian Strange say that making Credits mandatory is likely a violation of antitrust laws that forbid companies from tying two products in that manner. Companies cannot force customers to purchase a product they do not want in order to receive an unrelated item they actually want.

On the “Stop Facebook Credits” site that Newman and Strange have set up, the lawyers accuse Facebook of using its market dominance to leave developers no choice but to use Credits, and of blocking virtual currency competitors, some of which charge developers a much lower processing fee than Facebook’s 30 percent.

And because Facebook prohibits developers on its service from charging lower prices for virtual goods on non-Facebook sites — even if those other platforms have lower fees — the attorneys claim that the social network has made fewer options and discounts available to users both on and off its site.

Both Strange and Newman have taken part in high-profile class action cases, with the former serving as lead counsel in suits that have received a total of more than $300 million in settlements since 2000. Newman specializes in Internet law, and was lead counsel for Smiley vs. ICANN, which resulted in a multi-million dollar settlement. （source:gamasutra）

Social game developer and publisher Kabam today announced a partnership with CNET’s Download.com and Pokki developer SweetLabs, to bring its games to desktop computers without the need for a web browser.

As part of the agreement, a number of Kabam’s games are now available to download and play through the Pokki desktop games platform, including The Godfather: Five Families, Edgeworld, Thirst of Night and Dragons of Atlantis.

Kabam hopes to reach “potentially millions of users” through the partnership by offering its games to a new range of players that it has not yet aimed its games at.

“The partnership with Download.com and Pokki allows us not only to reach large numbers of new players but to enhance our games by enabling even higher retention and ‘stickiness’ because of the Pokki app’s unique qualities,” explained Chris Carvalho, COO of Kabam.

Kabam already revealed a big-name partnership earlier this month, when it signed an agreement with indie game portal Kongregate that will see the studio bringing a number of its games to the popular browser-gaming website.（source:gamasutra）

Just in time for the Japanese release of Star Wars 3D on the big screen (next month), Konami launched Star Wars Collection, a card battle game based on the movie series, on GREE today.

STAR WARS COLLECTION is a card game that will have players collecting a rich assortment of characters and vehicles, undertaking missions as they travel from planet to planet throughout the Star Wars universe. The game seamlessly captures the signature Star Wars atmosphere as portrayed in the six films, and will feature Darth Vader, Yoda, R2-D2, and many more characters from the series via stunning photos. There are also plans to feature periodic events based on the original films’ storylines.

Konami has rolled out Star Wars Collection on GREE for features phones and smartphones simultaneously a few hours ago.

I just checked, and the game is already in the list of titles recommended by GREE (in a special section on the platform).（source:serkantoto）

Greetings, true believers! As a gamer, daring heroics are typically your business. And now it looks like you can share that fact with your friends, as Playdom’s superhero RPG Marvel: Avengers Alliance is now live on Facebook.

While the game hasn’t officially launched, the official Facebook fan page for Marvel: Avengers Alliance is teasing this as “early access to the game.” Gamezebo recently had a chance to go hands on with the game and shared our experiences in a hands-on preview – but to sum it up, fans of role playing games and superheroes alike need to play this game. Let’s just hope enough people jump on board to give it the player base it’ll need to survive. After all – Playdom has already proven they’re not above killing off a great Facebook RPG if no one’s playing it.（source:gamezebo）

Developer Crowdpark launched two new social betting games on Facebook today, Pet Vegas and AnteUp, showing us just how the company’s kept busy since it raised $6 million in funding back in October.

Pet Vegas is a slot machine game featuring a cartoony animal theme. Players can bet on up to three slot rows and adjust the number of coins they’re willing to wager. Placing bets (even if they don’t win) allows players to level up, which unlocks bonuses and auto-spins of the slots. Like Crowdpark’s original Facebook betting game, Bet Tycoon, Pet Vegas incorporates virtual coins that players can buy with Facebook Credits, though there are also daily bonuses providing some free currency to play with.

AnteUp, meanwhile, is a peer-to-peer betting game that currently doesn’t have monetization in place. Instead, players target friends in their network with custom challenges and bet things like a drink, lunch, or a candy bar (“I bet Lisa a soda that I’ll get to the office before she does”). If players want to give the challenge a little extra publicity, it can be tweeted or turned into a Facebook announcement. After a bet is accepted, the challenged player is asked whether or not they won, and the challenger is asked to either confirm or dispute the results. Gameplay doesn’t change when an outcome is disputed, other than the game issuing a message about poor sportsmanship.

Crowdpark also has a third game in the works called 90Live, which will bring the company’s trademark social betting to the soccer field. 90Live is now in open beta and offers a variety of social sports bets for players, including live event wagers, trivia questions, and weekly predictions. The game doesn’t have an official launch date yet, but a final version is expected to launch some time soon.

Crowdpark’s increasing game base shows how social titles are continuing to tap into the i-gaming space, even though Facebook doesn’t currently allow users to gamble with real money. It’s estimated that revenue from online gambling will be up to $35.8 billion (over last year’s estimated $33.6 billion), which makes for a very tempting pie out of which to take a slice.（source:insidesocialgames）