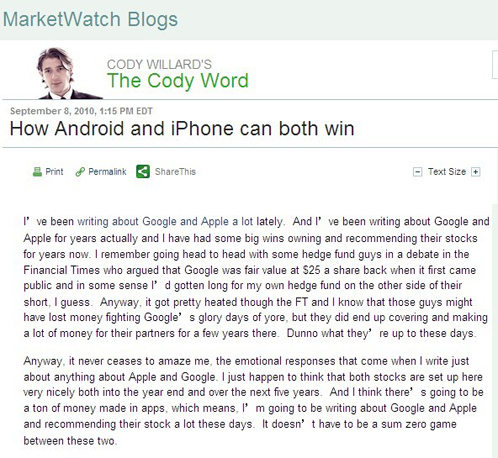 How Android and iPhone can both win

I’ve been writing about Google and Apple a lot lately.  And I’ve been writing about Google and Apple for years actually and I have had some big wins owning and recommending their stocks for years now. I remember going head to head with some hedge fund guys in a debate in the Financial Times who argued that Google was fair value at $25 a share back when it first came public and in some sense I’d gotten long for my own hedge fund on the other side of their short, I guess.  Anyway, it got pretty heated though the FT and I know that those guys might have lost money fighting Google’s glory days of yore, but they did end up covering and making a lot of money for their partners for a few years there.  Dunno what they’re up to these days.

Anyway, it never ceases to amaze me, the emotional responses that come when I write just about anything about Apple and Google. I just happen to think that both stocks are set up here very nicely both into the year end and over the next five years.  And I think there’s going to be a ton of money made in apps, which means, I’m going to be writing about Google and Apple and recommending their stock a lot these days.  It doesn’t have to be a sum zero game between these two.

All the people who think I hate Google whenever I write anything negative about my Android experience — hey, I love my HTC Incredible, but the blue-tooth to car-phone system sucks and the battery life is brutal….that doesn’t mean I hate Google or think the stock is gonna crash.  Same goes for Apple and anytime I’ll remind you that what Steve Jobs did back when he and his board changed the strike price of his options back in the day without letting us shareholders know all about, wasn’t cool or that I wonder if their aggressive approach to locking customers into their closed eco-system is wise, doesn’t mean I trying to talk the stock down like a short hater.  I’m just trying to be objective.  And objectively, I’m thinking that both Apple and Google are set up to win and win big here and win soon and later too.

So I’ll keep writing about it like I have been for years.  Stick with the winners, eh?

And the reason I bring all this up is because of what you’ll be reading in the mainstream more and more in coming months — iPhone vs Android.  When you read all these fascinating statistics about these smartphone market share wars, just remember that smartphones are still only going to be about 25% or so of the global market this year.  That’ll gradually hit more than 90%marketshare as today’s smartest, most expensive phones become tomorrow’s dumbest, cheapest but obviously remain true app-enabled smartphones.

And that means both can win.  Nokia too.  And Blackberry can survive.  Notice how we can already say “Remember Palm?”   Will we soon be saying “Remember Windows Mobile?” （source：MarketWatch）