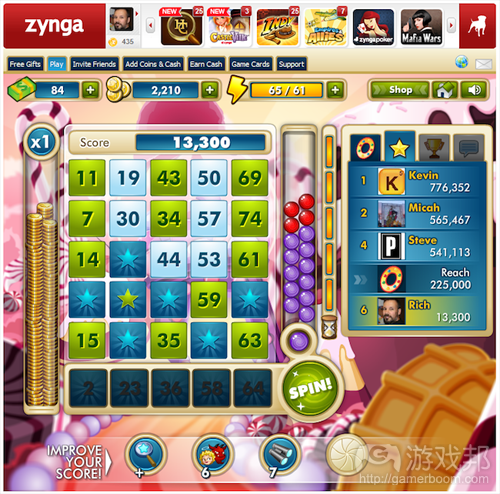 Slingo, best described as a combination of bingo and slots, was first launched in 1996 and has been downloaded over 3 billion times to date across various versions and platforms.

Zynga has now licensed the game and re-released it as Zynga Slingo with its own visual style and its own features, reports TechCrunch.

However, the company was quick to note that Zynga Slingo is an entirely different release to its upcoming Zynga Bingo, calling the releases complimentary of each other.

“Slingo has been a leader in the casual game space for over 15 years, and our partnership with Zynga will bring the Slingo brand to a whole new audience in a fresh, new way,” said Rich

Zynga also added that it is looking to license even more games and products in future. The company only just revealed a licensing deal with toy maker Hasbro last week.（source:gamasutra）

Analyst firm Wedbush Securities believes that there is still room for social games giant Zynga’s share price to further appreciate, although it doesn’t think the company’s online gambling plans are as solid.

Although Zynga’s stock price initially floundered, it improved following news that Facebook had filed for an initial public offering. In a new analysis report, Wedbush’s Michael Pachter has now said that Zynga is in a good position to further improve its stock thanks to recent releases.

In particular, he noted that Zynga has hired a number of former EA executives, including EA mobile lead Barry Cottle, putting the company in the position to develop “compelling content” in the near future.

“[We] think that having true game people in charge of its operations will position it to execute well on its business plan,” he added.

With this in mind, Pachter believes Zynga may well double its current revenues by 2013, with plenty of room for growth beyond that.

However, he does not think that Zynga’s venture into the online gambling space will be as successful, given that there are plenty of other companies that already have gambling userbases and loyalty programs that will provide advantages over Zynga.

“We do believe that Zynga could leverage its large base of free-to-play poker players to drive traffic to gambling sites, and believe that there is a meaningful revenue opportunity; however, we don’t think the opportunity is as large as many have estimated,” he noted. （source:gamasutra）

Major social gaming company Zynga currently operates a number of the top games across Facebook and mobile devices, but the company isn’t worried that competition is quickly growing on both platforms. Rather, Zynga sees this competition as an opportunity for further growth.

Schappert also said that alongside these growing audiences, Zynga hopes to expand its reach into new genres and game types, allowing the company to reach new types of players — including the traditional core audience.

“With respect to us and core gamers, our goal is to deliver the leading games in every major category of play,” Schappert said.

He specified that at the moment, the company has “nothing to announce,” but reiterated the company’s desire to produce games that cover all major categories. （source:gamasutra）

You know, there just aren’t enough six shooters in Facebook games these days. What, you say, “Digital Chocolate has answered my prayers with Gangs of Boomtown?” Why, thank you, whatever just came over us to type these words, because now we know that the social game maker has released a western-themed gangster social game exclusively on Google+ for the next month.

Gangs of Boomtown is the third game to hit Google+ Games through EA founder Trip Hawkins’ Digital Chocolate, but it’s the first for the developer to offer exclusively. In the western shooter, players begin in Boomtown, a shanty town that was recently burned to the ground by the Assassin’s Gang that took your family with it. From there, it’s up to you to save the Sheriff, restore Boomtown and get your revenge.

Digital Chocolate’s Helsinki, Finland studio crafted this rootin’, tootin’ social game, which allows players to share achievements in their own gaming Circles. At first glance, Gangs of Boomtown looks as if Mafia Wars 2 and FrontierVille got together and had one pretty baby. In other words, Gangs of Boomtown is a western-themed gangster game with town-building elements and multiplayer duels.

This is the third game to release exclusively on Google+, following Kabam’s The Godfather: Five Families and Plarium’s Pirates: Tides of Fortune. Google needs these exclusives as leverage to compete with Facebook’s thousands of games. (Google+ is currently home to 39 games, including Gangs of Boomtown.) With some seriously impressive audio and interesting elements like skill points for characters, Gangs of Boomtown could help Google+ gain some notoriety in gaming.（source:games）

Zynga’s aggressive development on its private cloud infrastructure, zCloud, shows us just how close the developer is to hosting an independent games platform.

Zynga started sharing more details on its cloud service as of yesterday during its Q4 earnings call, stating that about 80% of its games catalog now runs on zCloud instead of on public clouds. A blog post and infographic released today further illustrate how far the service has come in the last 12 months (click on the image to see a larger version of the infographic).

It’s significant because it means Zynga is almost ready to release its ZLive platform. For two years now, we’ve heard rumors and rough details around what ZLive — or Zynga Direct — is really supposed to be. Near as we’ve been able to tell, it falls somewhere between a fan network and a mobile social games portal built on deep Facebook integration. As early as October 2011, we knew that ZLive was capable of hosting some of its existing social games. Now that Zynga is sharing how far along zCloud has come in the last year, we know that Zynga is planning on hosting all of its games, plus some yet to be released or announced.

In its blog post, Zynga claims that zCloud is able to support more scale, efficiency and power than anything the developer experienced with public clouds through Amazon Web Services (AWS). In mid to late 2011, the developer began launching its games directly within the service instead of starting them off AWS. Mobile game CityVille Hometown was the first title onto zCloud; CastleVille followed some months later, testing the limits of infrastructure with high production values and rapid traffic growth. Zynga CTO of Infrastructure Allan Leinwand tells Inside Social Games that zCloud is already capable of supporting cross platform games for web and mobile — like Words With Friends.

The next step, then, is expanding beyond Zynga’s existing games catalog.

While Zynga certainly plans to launch more of its own IP on its own cloud and eventually on its own platform, we could potentially see Zynga publish other developers’ games on ZLive or some games portal extension thereof. Zynga hasn’t done very much with publishing as yet — beyond hiring Sony’s Rob Dyer to oversee the department and announcing a licensed Slingo game for Facebook as of this morning — but if the developer had an infrastructure capable of doing even more than what Facebook does for games, it’s not hard to imagine that Zynga would court other developers to come launch games on its service. It would go a long way toward decreasing Zynga’s dependence on Facebook.（source:insidesocialgames）