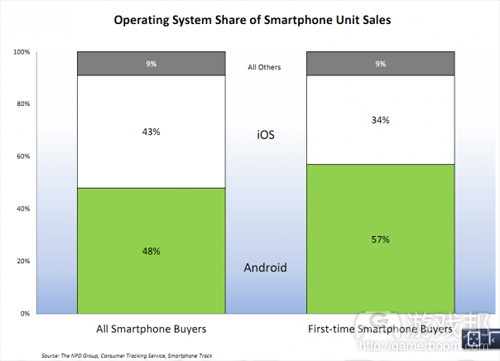 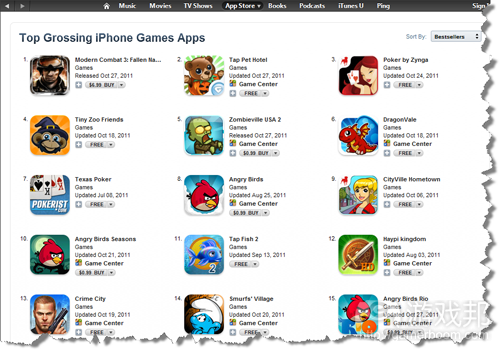 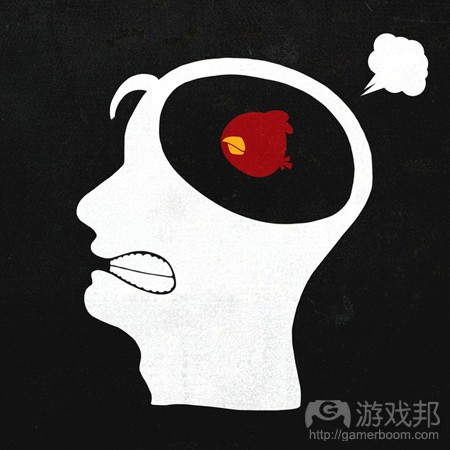 got angry birds on the brain(from games) 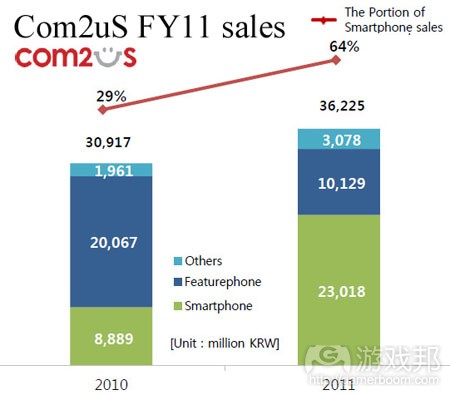 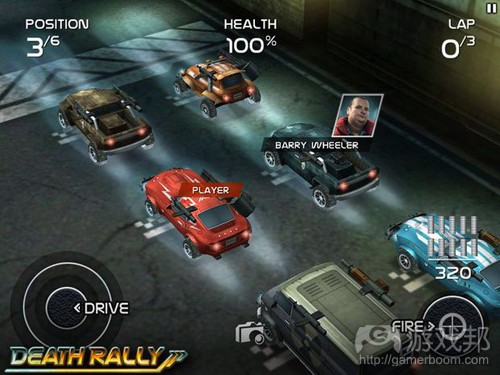 Corroborating what just about every other research firm has noted by this pointed, the NPD Group announced today in its latest report that the iPhone has become the best-selling handset in the U.S. during the fourth quarter.

No big surprises there, but the group also pointed out another interesting statistic: Despite the iPhone’s dominance, first-time smartphone buyers still overwhelmingly jump to Android.

In the fourth quarter, Apple overtook LG and Samsung with the iPhone 4S, iPhone 4, and iPhone 3GS, which all took the top three spots respectively in smartphone sales. Apple last month announced that it had sold a whopping 37 million iPhones during the quarter, thanks to the iPhone 4S launch and the holiday shopping frenzy. The iPhone accounted for 43 percent of smartphone purchases, compared to 48 percent for Android, according to NPD.

When it comes to smartphone newbies though, the figures look much different, with 57 percent going for Android and 34 percent going iPhone.

“Android has been criticized for offering a more complex user experience than its competitors, but the company’s wide carrier support and large app selection is appealing to new smartphone customers,” NPD’s Ross Rubin, executive director for Connected Intelligence, said in a statement today. “Android’s support of LTE at Verizon has also made it the exclusive choice for customers who want to take advantage of that carrier’s fastest network.”

I suspect Android’s big lead with newcomers is the availability of both cheap handsets and pre-paid phones. But with Apple’s low-end iPhone offering getting better every year (the iPhone 3GS is now free with contract), new smartphone buyers on a budget will likely begin to realize the iPhone is just as good a deal as a lesser Android handset.（source:venturebeat）

Given Apple’s action against incentivised downloads platforms in the past, the suggestion studios can now actively buy a spot in the App Store’s top 25 rankings will make grim reading for

those at the firm’s Cupertino HQ.

An annoymous poster on Touch Arcade’s forums has alleged an unnamed company is offering developers a guaranteed route to the top of the App Store’s charts for $5,000.

It’s claimed the company in question utilises bots that downloads a developer’s app several times until it breaks into the top 25, gaining the game in question a whole host of exposure in the process.

Crowding out the market

Though details are sketchy, a further source has told Pocket Gamer the story has merit, with the outfit having also been approached by a company that pitched a similar offer to the one outlined on Touch Arcade.

“We all spend hundreds of thousands if not millions promoting our games every month using legitimate advertising channels such as Flurry, Chartboost, iAd, etc,” he said.

“While I sympathise with the smaller developers who may not have as much funding as we do and feel that we are getting a free ride the fact is we are spending significant marketing dollars to achieve top ratings.”（source:pocketgamer）

The suggestion that third party companies have been utilising ‘bot farming’ techniques to offer developers guaranteed spots within the higher echelons of the App Store’s rankings was never likely to go down well with Apple, and indeed the company hasn’t been slow in offering an official response.

Via a short post on Apple’s developer channel, the Cupertino giant has fired an official shot across the bows of studios making use of such services, threatening to remove them from the

Out of the club

“Once you build a great app, you want everyone to know about it,” opens the entry.

“However, when you promote your app, you should avoid using services that advertise or guarantee top placement in App Store charts.

“Even if you are not personally engaged in manipulating App Store chart rankings or user reviews, employing services that do so on your behalf may result in the loss of your Apple

No exact reference is made to the supposed bot farming technique, though the timing of the post is unlikely to be a coincidence.

Battle of the bots

Attention was first drawn to the issue after an anonymous developer revealed an unnamed company had been offering studios a spot in the App Store’s top 25 rankings for $5,000.

The process utilises bots that download a developer’s apps several times until it secures a top spot in the platform’s charts.

The original company behind the outed technique remains anonymous, though Pocket Gamer has since learned from several sources that more than one firm may be offering these services and

that several leading developers are taking advantage of them.

Suffice to say, most parties are likely to cut back on these practises relatively sharply for fear of incurring Apple’s wrath, so the App Store rankings should make interesting viewing in the week ahead.（source:pocketgamer）

4）Study: Got Angry Birds on the brain? You might be better off that way

You keep doing you, Angry Birds addicts. According to a nearly six-year study released by the Archives of Neurology, playing mentally-stimulating games (like brain trainers and puzzle games) can improve memory and delay or prevent Alzheimer’s disease. The study doesn’t mention any games in specific, but University of California-Berkeley researcher and study author Dr. Susan Landau told ABC News that game playing can range from Sudoku to Angry Birds and more.

The study observed the presence of a certain protein, amyloid (often linked to Alzheimer’s), in the brains of 65 people with an average age of 76, 10 Alzheimer’s patients with aged 74 on average and 11 young controls with an average age of 24. “There was no emphasis on what games were played, but just at what age and how often people were participating in brain stimulating activities, including reading, writing, and games,” Landau told ABC.

Ultimately, the study found that those who did more reading, writing and gaming over their lifetime show less amyloid in their brains, and thus perhaps a lower chance of developing Alzheimer’s. If you ask folks like 100-year-old Kit Connell, games like this are vital to keeping sharp. And that, friends, is a fine excuse for flinging one last Angry Bird at the dinner table. You’re welcome.（source:games）

The reason for the static profits was a rise in operating expenses, up 16 percent year-on-year as Com2uS increased staff numbers, marketing and service fees.

In terms of the company’s sales growth, the major source was the sale of smartphone games and in-app purchases.

This part of the business grew 159 percent year-on-year to 23 billion Won (around $20 million).

It accounted for 64 percent of sales during the year.

In November, the Korean version of the Apple App Store opened a dedicated games category for the first time.

However, the majority of smartphone growth came from international markets, with the share of overseas sales climbing to 49 percent (worth 17.6 billion Won, or $15 million).

The company pointed to the success of games such as Homerun Battle 2, Tower Defense, 9innings and Tiny Farm is key drivers.

Indeed, as most of such sales are from Korea, Com2uS’ domestic sales dropped 16 percent to 18.6 billion Won ($16 million).（source:pocketgamer）

On the back of encouraging FY2011 sales figures, Korean mobile publisher Com2uS has set out an aggressive plan for 2012.

Having successfully transitioned its business from a domestically-focused feature phone business, sales of smartphone games now make up 64 percent of its business, while international sales accounted for 49 percent of sales in 2011.

Both elements are rising fast too.

Taking advantage of the situation, Com2uS is looking to expand both parts of its business.

Most of these titles will be developed in-house, but around 15 will be sourced from third party studios.

And more than half of them will be social freemium games; an area in which Com2uS hasn’t been particularly active. Its first launch was Tiny Farm in August.

It estimates smartphone sales will make up 88 percent of this total, while the share of international sales will be 67 percent.（source:pocketgamer）

With more and more console studios making a splash on smartphones, MGI Research senior analyst Tero Kuittinen’s move to define the reasons behind the success of Remedy’s Death Rally on iOS was always likely to garner interest.

Despite having a background in big budget console releases for major third parties – Alan Wake and Max Payne to name a couple – Remedy was able to evolve Death Rally into a $1 million hit on iOS over a nine month period.

Most interestingly, all this was achieved with a marketing budget of just $10,000.

Kuittenen argues that the release highlights a growing trend in the games industry, whereby established middle-hitters in the console arena have begun exploring new strategies and pricing models in the mobile market.

The price is right

In an eight point scale designed to detail the factors behind the game’s success for Forbes, Kuittinen begins by pointing out Death Really launched on the App Store for the high price of $4.99.

“Remedy priced it high, but spent only nominally on marketing – $5,000 on a FreeAppADay campaign, $5,000 on a tightly focused PR initiative,” offers Kuittinen, before pointing out the game recouped Remedy’s development costs in three days as a result.

“Modest early marketing spending can trigger a snowball effect if the game is appealing. Getting Apple to feature the game is a bigger boost than any ad campaign.”

Dropping the price down to 99c resulted in the game becoming the best selling iPhone game across the globe for five days, topping the charts in 80 individual territories in the process.

In-app purchases (IAPs) have also a key revenue driver: Death Rally amasses 60 percent of its revenue from IAPs, with that revenue split in half between so-called ‘experience speed-ups’ in single player mode, and unlockable vehicles in multiplayer.

“This implies that catering to both single-player and multiplayer audiences is important for maximizing revenue generation,” said Kuittinen.

Further to this, giving away the game for free during the European ‘Midsummer weekend holiday’ saw downloads jump by 2 million – any loss of revenue incurred from giving the game away made up by a surge in IAPs.

“Giving the game away can boost sales, but it’s not an easy trick to pull off,” admitted Kuittinen.

“It may not be the best option for all games, at least during the early months. It requires an intricate and well-balanced framework of in-game shopping features.”

Expanding beyond Death Rally, Kuittinen also suggests that, on average, Android games make about 30 percent of the revenue that iPhone games do – though, naturally, this isn’t always the case.

“Some Android titles eke out [a] mere 10 percent of the iPhone version revenue, some actually generate more,” he said.

“Much depends on how the vendor handles the tricky task of juggling in-game purchases.

“Android games can exploit the so-called ‘offer wall’ option, where consumers can download a free game if they opt to also download certain other applications.”

But Kuittinen’s main point is that, though Death Rally arguably had a head start (the game was based on an existing franchise from 1996), mid-range console developers can deliver fast earning content on smartphones if they deploy their apps in the right way.

“Recouping development costs in three days is something that is hard to pull off in the console world,” added Kuittinen.

“What this means for portable console vendors like Sony PS Vita and Nintendo 3DS is likely to become clear over the next 24 months.”（source:pocketgamer）