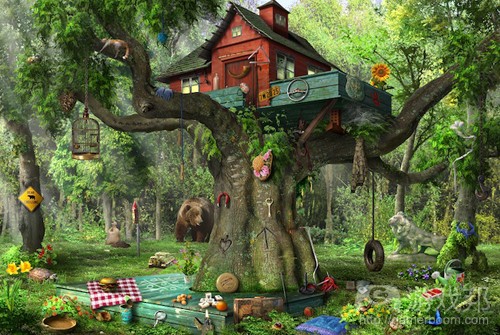 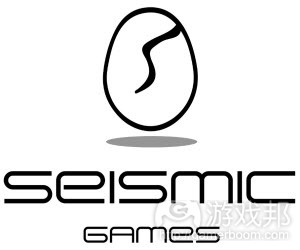 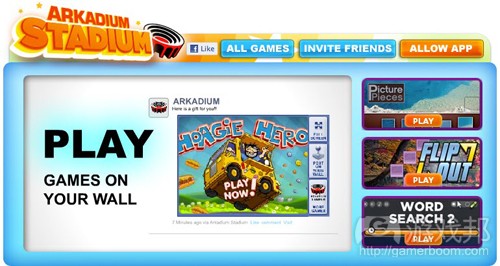 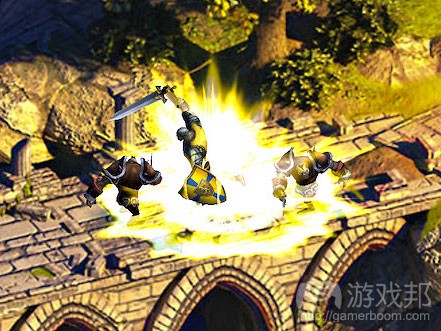 Zynga’s latest release Hidden Chronicles is available from today on Facebook. The game lets players explore scenes, uncover combinations of hidden objects (by clicking on them in a picture), solve puzzles and play mini games. The move into the hidden object genre was a matter of time after the remarkable success of games like Mystery Manor and Playdom’s Gardens of Time, which became Facebook’s most popular game in 2011.

Zynga calls Hidden Chronicles the “most social hidden object game available” – players help friends advance in the game, and challenge each other in scenes by finding as many objects as possible in 60 seconds. As players progress through the game, they’ll complete quests, earn coins, unlock new scenes, and more, all while unraveling the mystery of Ramsey Manor.

According to the company, Hidden Chronicles introduces a new art style for Zynga, with visually stunning scenes and animations as well as high-quality sound.（source:socialgamesobserver）

Watch out CityVille, there’s another contender coming for your title as top Facebook game! Luckily, this new kid on the block is in the same staple, as Zynga can lay claim to both CityVille and rising star CastleVille. According to the latest stats on AppData, CastleVille has rocketed to 37 million monthly active players, passing FarmVille with its almost 34 million players to become the second most played game (currently) on Facebook.

But wait – where’s EA / Playfish’s the Sims Social? The game still sits as the number five game on the service, but it has lost players (around 1.7 million) even since we threw out some advice that Playfish should try to help the game climb back up the ranks. And that was just a week ago!

Either way, does CastleVille have what it takes to finally topple CityVille as the number one game on Facebook? It still has 12.5 million more players to go (and that’s if CityVille does nothing but lose between now and then). Still, it will be interesting to watch as the competition develops further (or doesn’t) between these two games, and you can be sure that we’ll let you know if Facebook finally receives a new king to the castle if and when that does happen.（source:games）

3）With $2M in funding, social game studio Seismic comes out of stealth

Hardcore game veterans who worked at the now-defunct Pandemic Studios have started a new social game studio called Seismic Games. Unveiled for the first time today, Seismic plans to create games that are social, but at the same time it will emphasize some of the traits of traditional games, which are more immersive, emotionally engaging, and anchored in a believable world.

The company has raised $2 million in funding from DFJ Frontier and venture capitalist Tom Matlack. The rise of such a company shows that investors believe the social gaming Gold Rush hasn’t ended with Zynga’s initial public offering.

The Los Angeles startup is headed by Greg Borrud (pictured left), a former developer at Pandemic, which was acquired by Electronic Arts in 2007 and eventually shut down. Borrud said he’s been excited about the opportunity surrounding social games, but he doesn’t think the games developed to date are all that engaging. Seismic Games wants to create different kinds of social games that incorporate the great design techniques of veteran game developers. In contrast to the lightweight games created by Zynga, Seismic Games is creating “next generation” social games with characters and deeper game play. In that respect, Seismic is in a race with Zynga, which is also stepping up the quality of its game play experiences.

Seismic Games has more than 20 employees. Among the co-founders are Eric Gewirtz (director of Star Wars Battlefront) and Chris Miller (executive producer of F.E.A.R.), who both worked with Borrud at Pandemic. Other employees worked at Activision and Vivendi Universal. Besides DFJ Frontier and Matlack, a dozen other investors from the entertainment industry participated in the funding.

“2012 is an incredibly exciting and important time for the games industry,” Borrud said. “Zynga, along with a handful of other developers, have perfected the analytics-based approach to game design. Seismic is focused on bringing the next wave of social games to consumers who are getting tired of ‘me too’ products.”

“In blending the best of the analytics-based game model with the quality of entertainment in traditional video games, we’re developing an entirely new social games experience with a goal of taking this market to the next level.”

The company’s first game is set to debut in the first quarter. It will be character-focused and customizable, with narrative-based game play. The games will have user-generated and real-time content, which will “play a central role in the game play.” It will also have branded and professional entertainment partnerships that connect online and offline marketing opportunities to audiences playing the game.（source:venturebeat）

Betting big on Microsoft’s multi-platform game strategy, Arkadium is announcing a three-year strategic partnership to develop and publish games for Microsoft’s current and future game platforms, from the Windows PC to future software running on smartphones and tablets.

Kenny Rosenblatt, chief executive of the decade-old casual and social game company, said in an interview that Arkadium will devote 40 to 50 percent of its 120-person workforce to developing games for Microsoft platforms. That’s a huge and surprising commitment, given that other game developers have focused their resources on Apple iOS, Facebook, or Android game platforms.

Rosenblatt said his company will still develop games for non-Microsoft platforms, but titles developed for Microsoft will be exclusive for its platforms. With the pending arrival of Windows 8 and its cross-platform touch-oriented user interface (dubbed Metro), Rosenblatt sees an opportunity to be early in spreading games to what could be one of the biggest platforms for games going forward.

“There are already 500,000 apps on the Apple platform and a lot on Android, so it’s a saturated market,” Rosenblatt said.

With just 50,000 apps on Windows Phone 7, the competition isn’t as fierce and the opportunity for rapid growth should pick up as Windows 8 computers and tablets take off this year. Now that Arkadium has more resources, it can afford to launch games on new platforms where it can try to grab a larger market share position early on.（source:venturebeat）

5）Quote of the Moment: ‘Zynga, Kixeye, Kabam try to make the same game’

Those are harsh words coming from a Zynga alumnus, don’t you think? John Yoo, lead designer and co-founder of the new social game maker Rumble Games (and formerly of the big red dog), said the words to Business Insider in an in-depth interview. “Zynga, Kixeye and Kabam try to make the same game over and over,” Yoo told the website.

Yoo and former BioWare (which has since gotten into social games) CEO Greg Richardson have raised $15 million from investors like Google Ventures on the premise that their games will provide “hardcore” gamers with the Facebook experience they’re looking for. Rumble Games plans to release two games in the first half of 2012, using the new Flash Player 11–the latest in the most commonly used tool to create social games–to offer high-quality games “that people would pay for in a boxed game.”

“I do think our games will be different, when we have combat in our games we want it to feel like combat,” Yoo said to Business Insider, referring to the strategy social games put out by Kabam and Kixeye. “We want you to actively feel like you’re taking a punch or swinging a sword. We want players to participate in the actions of controlling a character and battling it out to that effect.”

Developers other than Kabam and Kixeye have tried to cater to the hardcore audience on Facebook before, even with full-blown shooters, to tepid results. So, it’s uncertain whether Rumble Games can create a commercial hit going after the same crowd. That said, what appears to be the studio’s first game does look fairly badass, if a tad familiar.（source:games）

Dueling Blades is an upcoming fantasy-themed RPG/strategy game set to launch on Facebook in March 2012, with iOS and Android versions to follow later in the year.

The game casts players in the role of their own customizable 3D avatar and throws them into live battle against both other players and computer controlled opponents. Gameplay takes the form of “simultaneous turn based strategy,” allowing players to take part in live conflicts while working around common latency and hardware limitations of social network users.

“Dueling Blades is not your usual social game,” explains Joseph Cooper, COO and lead programmer at developer HourBlast Games. “It is a ‘core’ game with a strong multiplayer experience, and we believe our game will grow organically with the viral marketing channels already present on Facebook.”

Cooper is also seeking relationships with key publishers to raise the profile of the game prior to its official launch in March, aiming for players to have “tons of opponents to battle at the initial launch.”

The game is built on the popular Unity3D game engine, meaning that the port to iOS and Android devices proposed for later in the year will be a relatively quick and straightforward process. Cooper notes that Google+ is not currently in the team’s release plan, but they are looking into the possibility for the future, and have also tested the game using Google Chrome Native Client, meaning the game may also see a release via the Chrome Web Store.

Dueling Blades will be monetized following the free to play model, with bonus items available via microtransaction. In the Facebook version, these will be handled directly using Facebook Credits, while the iOS and Android versions will use their respective platforms’ in-app purchase systems. Items on offer will initially include experience bonuses, boosters and vanity items, with the team working on additional monetization strategies for the game in the long term.

“We are not against analytics,” says Cooper, “but we still believe a well-developed game can monetize on social platforms. In a few weeks, we will be crowd funding through Kickstarter to support the launch of Dueling Blades. We have a lot of fun rewards to give out, such as creating a custom likeness of a supporter to be used as a non-playable character in our game.”

The rewards won’t stop after the Kickstarter funding period is over, either — Cooper is proposing that real-world rewards will be on offer for player victory in tournaments.

“Weekly rankings and a dynamic league system will provide the simplicity of core game concepts for all gamers alike to enjoy the diverse fighting system in Dueling Blades,” explains Cooper. “We hope Dueling Blades will be at the forefront of competitive fighting games on social and mobile platforms. As social gamers, we see a void in the social gaming platform; the creation of Dueling Blades is the first step to filling it.”

Dueling Blades is set to launch on Facebook in March 2012. The Kickstarter funding drive is set to begin in the next few weeks.（source:insidesocialgames）