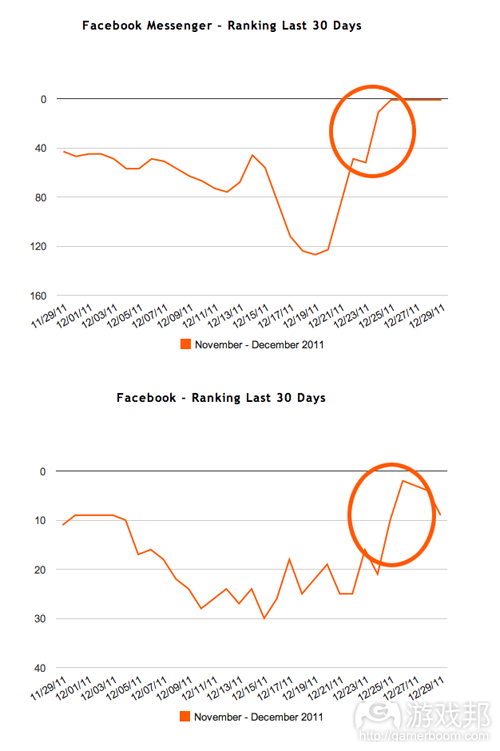 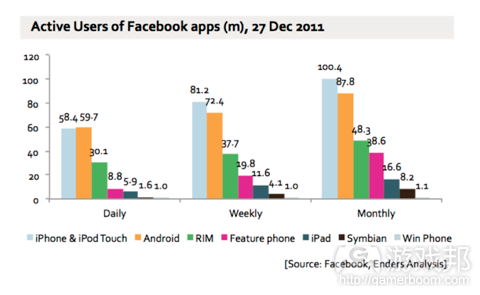 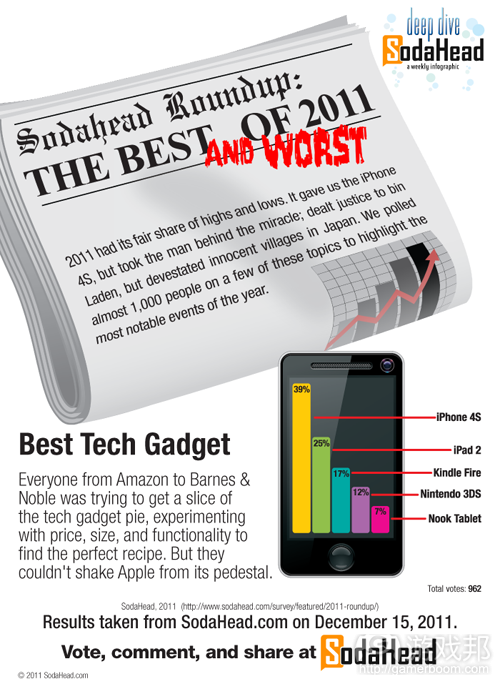 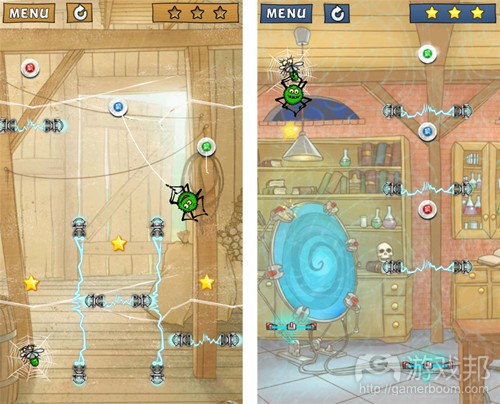 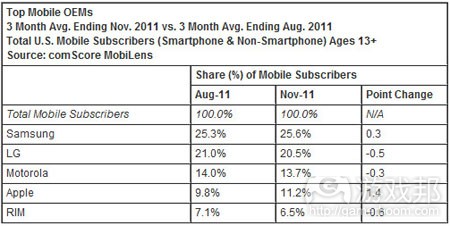 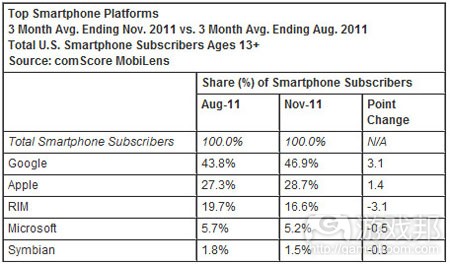 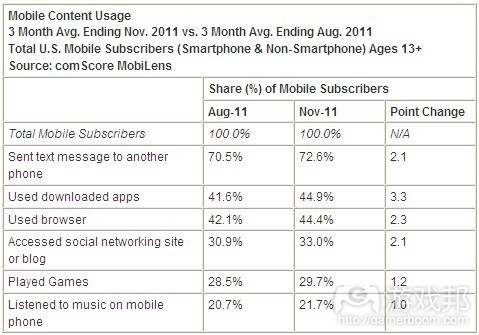 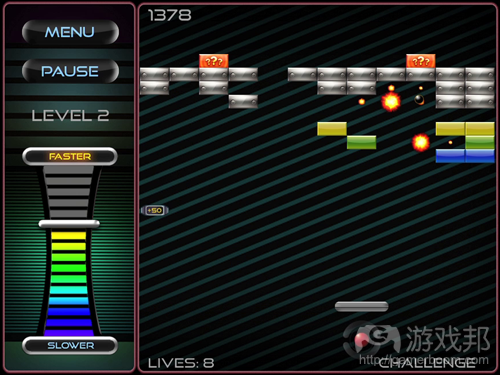 The annual uptick in app downloads and new device activations around Christmas has translated directly into big mobile gains for Facebook.

During the holidays the social network’s apps climbed to the top of the iOS and Android charts, with both Facebook’s standalone Facebook Messenger app and mobile app seeing noticeable spikes in downloads after Christmas according to AppData. The apps are currently the #1 and #9 most popular free iPhone apps.

The story is similar on Android, and as of today, Facebook Messenger and Facebook for Android are the #1 and #2 most popular free Android apps.

The numbers are a nice cap to the year for Facebook, which focused heavily on its mobile strategy in 2011. Mobile companies accounted for more than half of the acquisitions Facebook made this year and one of those companies — Beluga, which the network bought in March — developed the social network’s standalone messenger app.

Facebook also finished the year with more mobile users than ever, according to Enders Analysis analyst Benedict Evans, who estimates that the social network’s mobile apps now have more than 300 million MAU. Unsurprisingly, the iOS and Android versions of Facebook’s apps account for the lion’s share of its mobile userbase. Approximately 117 million people log in to Facebook’s mobile app every month from an iOS device and 87.8 million from an Android device. In addition, almost half of all Android and iOS device owners have installed Facebook’s mobile apps.（source:insidemobileapps）

2）2011′s hottest gadgets all have one thing in common…

According to an end-of-year poll put together by SodaHead, a leading opinion-based web community, the five best gadgets of this year all provide game entertainment. The website’s poll of 962 people declared Apple the clear winner, with its iPhone 4S and iPad 2 taking 39 and 25 percent of the vote, respectively.

Of course, it’s pretty clear at this point that the iPhone and iPad game scene is thriving, especially when it comes to “free”. Following Apple’s empire is Amazon’s Kindle Fire with 17 percent of the vote, the Nintendo 3DS winning the hearts of 12 percent of voters and the Nook Tablet scoring 7 percent of the vote.

While the 3DS is billed as more of a hardcore mobile gaming device at the moment, Nintendo promises that more casual games are the way. The Nook Tablet and Kindle Fire, however, have made casual games a major pillar of their strategy since day one, with game franchises like Bejeweled, Words With Friends and Angry Birds available on both devices already.

A sample of just under 1,000 might be considered rather small, but we’re willing to bet that more than 1,000 folks would generally agree with the results. A look at any of these devices’ sales numbers–well, the 3DS’s later numbers–can attest to that. As for 2012, you can likely expect our prediction for 2011 ring even truer: Mobile games will burn hotter than ever. Check the infographic in full below.（source:games）

According to its co-general managers, 2012 is the year when Chillingo will “put the gameplay back into freemium”, as well as pushing on into Android.

Meanwhile, over Christmas, it’s also sneaked out its first game for Windows Phone.

Developed by Russian outfit MaxNick, and released under Chillingo’s Clickgamer label on iOS, Spider Jack is a Cut the Rope-esque puzzler, that didn’t fare well when reviewed by Will in May.

“We are excited to introduce Chillingo games to the Windows Phone 7, and see it as a new opportunity to bring players the games they want to play, on the devices they want to use,” said Chris Byatte, co-general manager and co-founder of Chillingo.

“Spider Jack is already a fan-favorite title and we look forward to bringing even more popular Chillingo games to the Windows Phone Marketplace in the future,” added Joe Wee, Chillingo’s other co-general manager and co-founder.

Spider Jack is available now on Windows Phone Marketplace in the usual try-before-you-buy mode or for $2.99.（source:pocketgamer）

4）Texting still king for the 234M US mobile device users

There are 91.4 million people in the United States who use smartphones, according to a report by comScore today, but how are they using their phones? Texting, app usage and listening to music top the charts.

For three months, ending in November, over 234 million mobile devices were used by 13 year olds and older, says comScore. Smartphones make up around 39 percent of that group. Android is still winning smartphone market share, up 3.1 percent to 46.9 percent, with Apple trailing in second. Research in Motion fell 3.1 percent, but remains the third competitor. As a phone manufacturer, RIM fell another .6 percent, and sits at the bottom, below Samsung, LG, Motorola and Apple in that order.

While smartphones have changed much of the way we use our phones, some activities remain the same. Of all types of mobile devices, 72.6 percent of users use their phones to send text messages. Checking social media and playing games also made the leader board. Most interestingly, however, is the switch from browsing to application usage. In the three prior to this current study, more people, 42.1 percent, used their browsers to get information in comparison to the 41.6 percent that used apps. Now, however, applications have taken the lead by .5 percent. The percentage is small, but it shows the need for better browsing on smartphones.

Mobile music listening comes in sixth place, at 20 percent. While this number seems small, most of these users probably come from smartphones, except for a few feature phones which support the activity. Given that smartphones only make up 39 percent of the mobile user population, half of these people use their mobile phones to listen to music. Indeed, sales for Apple’s iPod dropped 27 percent since last year’s fourth quarter, and is projected to continue decreasing popularity.（source:venturebeat）

Not known for its presence on smartphones, French publisher Atari (once called Infogrames, now part owned by Namco Bandai) is currently sitting pretty on iOS.

Its freemium iPhone and iPad game Breakout: Boost has racked up over a million downloads in the two weeks since its release.

Based on the classic bat, ball and bricks game, it adds different ball and brick types, with the first five levels being free and over 200 levels unlocked via in-app purchases.

It supports Game Center and OpenFeint in terms social features, while additional levels are scheduled to launch via an update in January.

“We continue to see a strong positive consumer response to the classic and new versions of our world renowned games library – first with Atari’s Greatest Hits then in November with Asteroids: Gunner and now with Breakout: Boost.” said Jim Wilson, Atari’s CEO.

“These launches lead our mobile strategy to unleash the power of the Atari brand by delivering high quality experiences to our legions of fans and new gamers alike.” （source:pocketgamer）