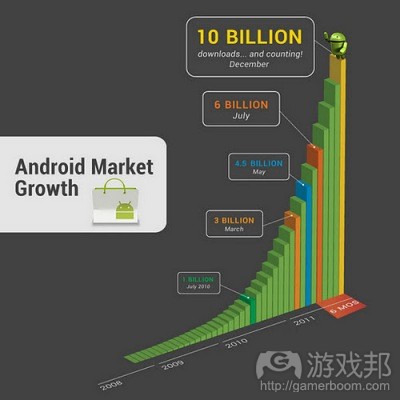 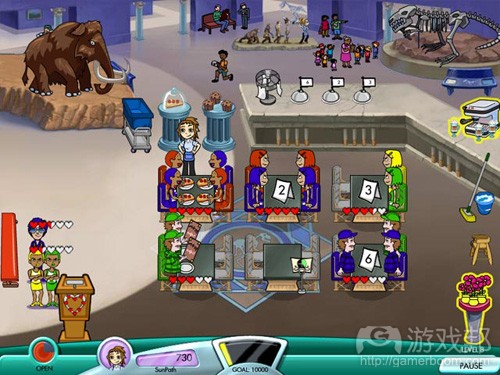 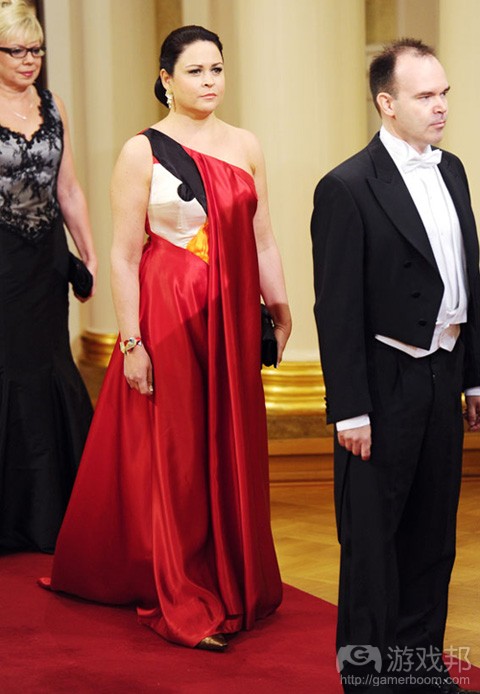 Google’s Android Market has exceeded 10 billion application downloads, with users now downloading at a rate of one billion apps per month, the company announced Tuesday.

By comparison, Apple reported more than 18 billion app downloads in October. The Android Market is hot on its heels, and we’re not surprised. Android now commands half of the U.S. smartphone platform market.

And you should expect the Android Market download figure to shoot up exponentially — and soon. App downloads are already rising at an accelerating pace, and there will likely be a flurry of post-holiday download activity as gift recipients fire up their brand new Android-powered tablets and mobile devices, and load them up with apps.

Android Market does, however, face app download competition from a growing number of third-party Android app stores, including Amazon’s own Appstore for Android.（source:venturebeat）

Mobile and social casual games publisher PlayFirst (Diner Dash, Chocolatier) laid off an unspecified number of its employees last week due to “restructuring”.

Founded in 2004 and based in San Francisco, the company employed more than 100 workers as of late last year. PlayFirst has released dozens of casual games, and its most popular franchise, Diner Dash, has seen over 550 million downloads.

While the publisher previously released titles across a variety of platforms, it announced a focus on the mobile and social market in October 2010 after raising $9.2 million from investors and promoting Eric Hartness to Social Games VP and GM.

PlayFirst’s forays into the social space have proven unsuccessful, however, as low user counts forced the company to cancel all of its Facebook games not long after launching them, including its social adaptations for Diner Dash and Chocolatier.

And Hartness, the man who was meant to lead the social push, left for a Marketing SVP position at mobile app start-up Pinger in August. Other social games veterans who joined the company last year from Playdom and Zynga have left, too.

PlayFirst claims the layoffs will not change its emphasis on the mobile market, though. The firm’s vice president of marketing Katie Kihorany told Gamasutra, “Our future plans are to continue to focus on the mobile casual gaming space.”

“Part of this focus means continually making sure that the organization is structured to allow us to focus on creating those great games. Unfortunately, sometimes that means restructuring, so that we can better achieve this goal,” she added.

The company did not respond to Gamasutra’s repeated requests for further information on the number of employees affected.（source:gamasutra）

It’s now the largest Korean mobile publisher in terms of revenue, so Gamevil is looking overseas for expansion opportunities.

It’s just announced the setting up of Gamevil Japan.

Headed by Jonggu Na, the Tokyo office will carry out various services, including localisation and marketing, as well as building on the company’s existing partners in the countries, including Apple, Google, NTT DoCoMo, KDDI, Softbank, DeNA and GREE.

“The Japanese smartphone game market is growing rapidly and has one of the strongest gaming communities in Asia,” said Na.

Few could accuse Rovio of being anything but bullish when it comes to shouting from the rooftops about its fortunes.

You have to wonder, therefore, how ‘Mighty Eagle’ and CMO Peter Vesterbacka managed to keep a lid on Angry Birds’ advertising prowess during the months where Rovio’s critics did little else but point out how the studio had failed to launch a follow-up franchise.

If statements by Vesterbacka during an interview with Business Insider are to be believed, there’s little need for a new series when the one you’ve already launched is generating more ad impressions a month than Google.

The figures themselves are yet to be verified – it’s not clear whether Vesterbacka meant Google’s exploits just within apps, or within mobile search as well – but Vesterbacka’s statement that Angry Birds generates 10 billion impressions a month is undoubtedly impressive, regardless of who it tops.

Indeed, Vesterbacka believes such is the strength of Rovio’s hand, that it’s even able to compete outside the traditional confines of the games industry.

“TV will view us as a big competitor,” he added.

“Not just TV programming — brands spend most of their money with TV ads. We know we can do much better than TV ads, like what we did with Angry Birds Rio. The most efficient promotional tool of that movie was our game.

When asked to categorise Angry Birds, the option that generated the most positive response – other than simply labelling it a game or a brand – was the notion that the series now acts specifically an advertising platform.

“We serve 10 billion ad impressions every month already. We are the biggest mobile ad publisher on the planet already.”

“Right now we’re doing a pretty crap job just serving a bunch of banners, it doesn’t really do much for our fans,” Vesterbacka added.

“If you look at Angry Birds Rio, that’s a great example of how to do it. That whole game is built around promoting the movie, and it’s such a great game and experience that people are willing to pay for it. So it has value in itself.”

Vesterbacka concluded by backing up previous claims the firm is looking to emulate Disney, stating its current valuation of $2.5 billion is far from where the company wants to be.

“Those are the right kind of numbers, but Disney is worth $60 billion, we’re far form that,” he added. “Over the next 5-10 years, we want to go there.”（source:pocketgamer）

That woman is Teija Vesterbacka, wife to Peter Vesterbacka, head of marketing at Finnish Angry Birds creator Rovio. She’s seen here following her husband into the Finnish Presidential Palace, sporting a bright red gown with the visage of an Angry Bird hanging from its only strap. And she looks kind of perturbed about the whole ordeal, no?

Well, maybe that’s because the couple was apparently two of roughly 2,000 invited to the estate for the annual, nationally televised Castle Ball hosted by the president of Finland to honor the country’s Independence Day Reception. Mrs. Vesterbacka’s look may also be because she’s wearing Angry Birds gear and her husband clearly isn’t–no fair!

At any rate, the fact that folks clearly representing Rovio have been invited to the President’s Palace speaks volumes to the fact that Angry Birds is huge. So much so that not only has the game flew past 500 million downloads worldwide, but the creators plan to release four more games–not updates, full-blown games–in 2012 to keep the fever alive. For what it’s worth, that is one incredible dress. Get a better look below.（source:games）

So, we’re just going to assume that by “social”, Rovio game designer Jaako Iisalo means “Facebook”. During the Social Games and Virtual Goods World conference in London, England, the Angry Birds designer told Pocket Gamer that four new Angry Birds games will launch next year. More specifically, one of them will be a “social” game.

And, will you look at that, Angry Birds is already on Google+. Granted, there are versions of the iconic everywhere mobile game on Facebook, but none of which seem legitimate. (One even seems to stream the Google Chrome version of Angry Birds through to Facebook.) While this could just as easily mean an Angry Birds game on a mobile platform with heavier social features, the developer has said in the past that the franchise will hit Facebook.

Honestly, how Angry Birds is available on the Intel AppUp store and in retail stores across Europe before officially on Facebook is beyond us. At any rate, we can likely expect these other three Angry Birds games to tap into new genres, since Rovio has expressed interest in exploring new types of games for its irate avian creatures. And just when you started to grow bored of it.（source:games）

7）Mobile payments are on fire today, where will they be in 2015 (infographic)

We just can’t give enough love to mobile payments as we watch the world move from cash to credit to cardless. Intuit is feeling the evolution too and created an infographic to explain just how much mobile payments are growing and where they’ll be in 2015.

The two biggest payment players last year were obviously credit and debit cards, with a small, but rising mobile payments only making up 5 percent of purchases executed. But important to note is that as credit, debit and other forms of payment increase, cash exchange decreases. People have long trusted plastic to deliver their currency, so why not trade in the plastic for airwaves? Well, according to Intuit, people will do just that. Cash is expected to drop to just over $1 trillion changing hands in 2015, and alternate payments jumping up considerably to $2.7 trillion, hugely surpassing cash as a trusted method of payment.

Also important to keep in mind is the proliferation of smartphones themselves. Smartphones have permeated over 40 percent of mobile users, but more interesting is the fact that this is mirrored in business owners. 37 percent of entrepreneurs also work through the smartphone, creating a level playing field for people wanting to buy and sell over the phone.

Today, only one in four people are willing to whip out their iPhone or Android to buy goods. What’s to blame? Security concerns top the charts at 64 percent, but an underlying reason is that 46 percent of people just see their phones as devices to call or e-mail people. Perhaps people have not yet adopted the device as a utilitarian device, and instead use it only for its base functions, and perhaps entertainment.（source:venturebeat）