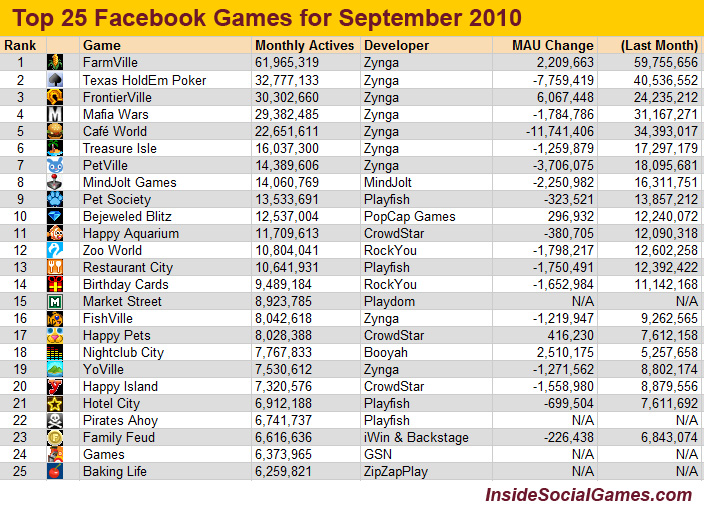 While July’s charts  finally began showing signs that the continual drop in monthly active users (MAU) was tapering off, this past month has witnessed new falls. Of the veterans to this list, 16 experienced losses, with most well north of a million users. However, while some blame can be placed on Facebook’s constant changes and updates to the platform, the appearance of four new titles — two of which are not from the major social game developers — suggests that social game players may be looking for fresh ideas, and not always iterations on the same concept. From the vastness of Playfish’s Pirates Ahoy to the highly polished clubs of Booyah’s Nightclub City, the games that are trying to raise the bar in both design and creativity have also been the ones that are growing fastest.

It’s important to keep in mind that many of the largest games on this list also launched long ago, like Playfish’s Petville and Zynga Poker. Perhaps we’re starting to see some natural decline among the oldest titles?

As a side note, even with the applications that have lost numbers, it may not be as bad as it appears. Facebook has had a number of reporting bugs that may have skewed MAU counts for some games, giving them higher than normal numbers.

Here are the highlights for the top 25 Facebook Games for September 2010:

* Of all the other Zynga titles, the only other one to see positive numbers is FrontierVille, which moves up to #3 with a gain of over 6 million MAU. It is also worth noting that of all the Zynga apps, FrontierVille is also one of the more unique ones.

* MindJolt continues to hold at its #8 position, but loses 2,250,282 MAU this month. All the same, MindJolt has fluctuated wildly over its lifespan, yet has almost always remained in the Top 25.

* Another game that is doing well this week comes from casual king, PopCap with Bejeweled Blitz. Having slowly worked its way up the charts since its launch last year, it now reaches #10 with over 12.5 million MAU.

* CrowdStar and RockYou make their appearances at #11 and #12 respectively. The former’s Happy Aquarium walks away with a moderate loss of 380,705 MAU, while Zoo World drops a sizable 1.8 million.

* New to the list this month is Playdom’s business-oriented title Market Street. The app that let’s users create hardware stores, boutiques, or electronics stores comes in at #15 with almost 9 million MAU.

* CrowdStar does get some positive numbers in the form of Happy Pets at #17, having gained just over 400,000 MAU.

* Booyah proves that quality can mean the world as the non-advertised Nightclub City continues to grow, moving up from #25 to #18 with a 2.5 million MAU growth.

* Also new to the list is the sea-faring pirate title from Playfish: Pirates Ahoy. The app reaches #22 with 7.4 million MAU.

* Rounding out the list at #24 and #25 are the simply named Games and Baking Life from GSN and ZipZapPlay respectively. The former earns approximately 6.4 million MAU, while the latter earns 6.3 million.（source：inside social games）