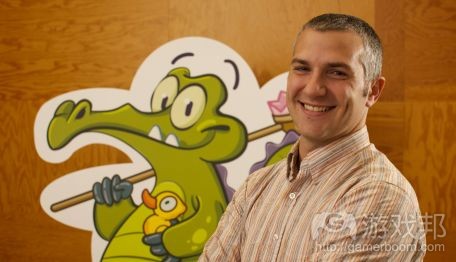 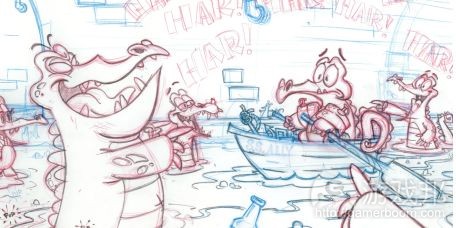 “I studied film studies and nothing to do with games, and also studied the Japanese language. And I had lived in Japan for a couple of years, so I was fluent in Japanese,” he remembers in a recent interview with TUAW. “I didn’t know what to do, and I settled down on a job listing on Disney for QA testing on an upcoming game, and they wanted someone bilingual. That was actually my kind of thing, my way in the door. I got to work on this game called Spectrobes, which was a DS game that Disney created with a team in Japan, so they needed someone to help do the testing and translate the bugs and communicate with the dev team.”

But FitzRandolph was also working on his own titles, continually trying to get into actual game design at Disney. When the App Store was announced, FitzRandolph decided to try and make his own iPhone games. One of those games was eventually picked up by Disney and became the very popular Jelly Car series. And FitzRandolph’s second, original game for Disney Mobile, in the position he eventually earned as Game Design Director, is the critically acclaimed and top grossing puzzler Where’s My Water.

It took a little while for FitzRandolph to join Disney’s mobile gaming department, however. From his position as a go-between for the US and Japanese devs on Spectrobes, he first got offered to go work on the console version of the Toy Story 3 game in Salt Lake City. He says that position taught him a lot, but Salt Lake City didn’t turn out to be the place for him.

“I didn’t really enjoy living in Salt Lake very much, so I came back to California,” he says. “And somewhere in that timeline I had also pitched the idea of doing a sequel to Jelly Car, which I had made on my own time as like a hobby project.” FitzRandolph had been working on Jelly Car on his own for a while, and says it was first concieved as a project in Microsoft’s XNA development system for the Xbox. “I was like, maybe I can try making a physics system that would sort of create a custom car, just experiment. When I got it working, I just did a lot of experiments with it, but I didn’t really have an idea for a game. Except for making a little test for a car, create a little object to do the physics work. So I thought you might have a little object and you can make obstacles and get across gaps and stuff like that.”

When the App Store finally opened up on the iPhone, FitzRandolph says he felt it might fit the system that he’d made, so he went out and bought an iPod touch to develop on. “I got it working on the iPod touch, and it worked well enough.” He then showed it around Disney, and when he pitched the idea of a sequel to the mobile division, which was looking for games to make at the time, Disney agreed to make and publish the title with him.

FitzRandolph says it was exciting to have a famous company like Disney working on something he’d created himself, but that it was a little overwhelming as well. “I had never thought about what was Jelly Car, like what are the rules or style or whatever. In the first round of assets, I’d look at it and say that doesn’t look like Jelly Car, and they’d ask what it was supposed to look like. I’d not really thought about that stuff, because it had always been this really personal thing. But it was really exciting, and it’s really cool to be a part of that.”

FitzRandolph’s team not only finished up Jelly Car 2, but then went on to make Jelly Car 3, both of which did well for Disney. And after that, he and the team (which they call “Creature Feep,” after a problem many devs will find familiar called “feature creep”) started thinking about what to make next. They wanted to make a physics puzzler, given how popular those have been on the App Store, but coming up with the actual gameplay involved a lot of brainstorming and iteration, says FitzRandolph.

“We had a whole bunch of ideas, and at some point along the line, it kept coming back that water, water was very fresh and people hadn’t done a lot of physics around water,” he remembers. “But it was also really successful in that we all know how water splashes and flows and it might be fun to make a puzzle game around that.” The team put together a prototype based around diverting the flow of water with touch controls, and of course that eventually became Where’s My Water. “People liked it, really loved the prototype, and then we got enough response on that that we started making the actual game.”

The other elements of the game, involving a cute backstory about underground alligators who need water to take a shower and stay clean, came later on. “We basically realized that this stuff was directly connected to earth and dirt, and there were a lot of little gameplay cues that we felt like were going to be hard to explain,” FitzRandolph says, “so we stopped and brainstormed about the story and what the visual elements could indicate.” The team wanted to use the water to fill something underground, perhaps to a certain line, but struggled to figure out what logically would need water in that way. “What kind of things could we fill up underground? A bathtub would be cool but that doesn’t make any sense underground. Well maybe it does,” laughs FitzRandolph, “What about alligators living under the city? And it sort of snowballed from that.”

Where’s My Water has done really well for Disney, so much so that the company says it has found a new official Disney character in Swampy the Alligator, probably the first time Walt Disney’s legendary studio has taken IP directly from an iOS game, instead of the other way around. FitzRandolph says coming up with a strong character was part of development, but not just because Disney wanted IP. “We wanted to come up with a really good character that had a lot of personality — it brings a lot of life to the puzzles. But also hopefully will have a big enough world that we might want to do a story about it that’s not just our game, also in another format.”

“We were concerned,” he adds, “that maybe alligators in general are not the most cuddly animals, but we felt like hopefully it will work out.” And so far, it has, as the game still continues to do well on the App Store.

What’s next for FitzRandolph and his team at Disney? He says they’re still working hard on new content for Where’s My Water. The game has just recently gotten a big new update, “and we have plans for several more of those, so we’re all coming up with new gameplay, new levels, and things like that. Especially as the game continues to do well,” he says, “we want to continue to support it.” Presumably he will eventually release another title, but right now it’s all followup on the current release.

As for FitzRandolph, he says he’s happy to be doing what he’s doing. Disney Mobile obviously appreciates having him around these days, making hit games for them, even if he did first get his foot just inside the door of the QA department.（source:tuaw）