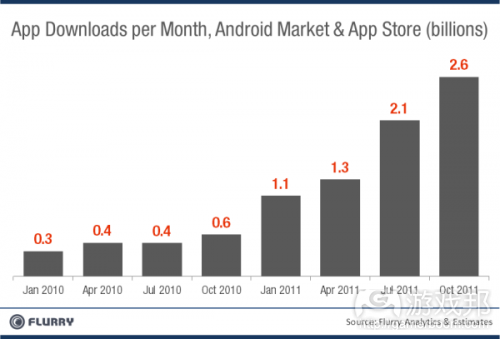 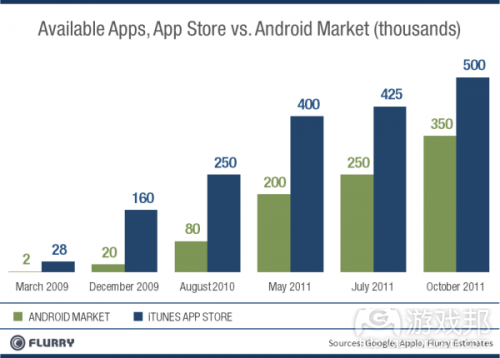 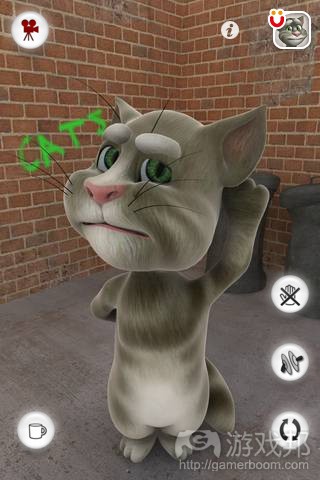 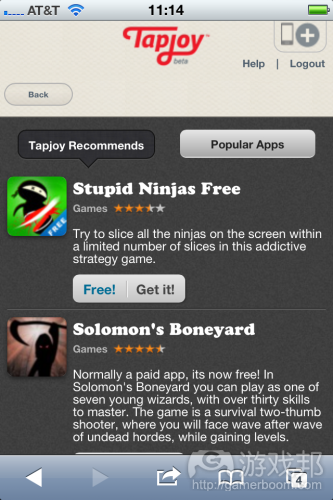 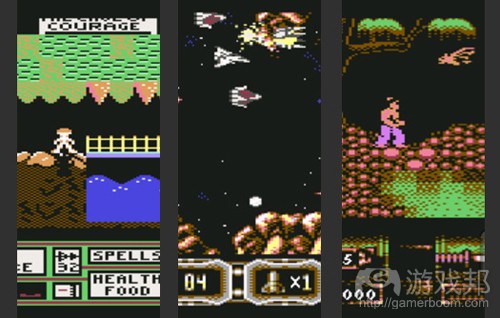 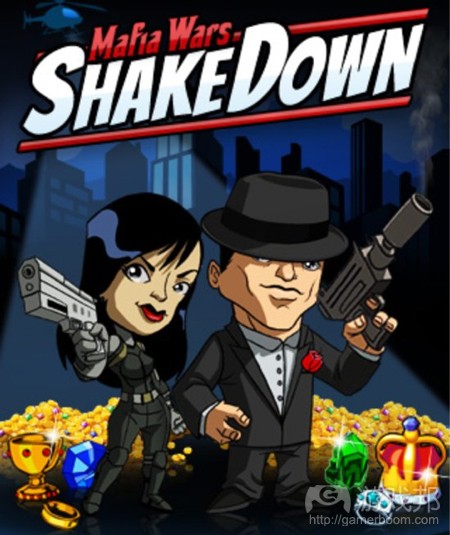 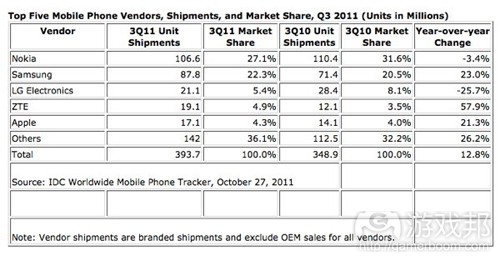 Apple and Google have ushered in a new era of mobile computing whose consumer adoption is rivaled only by the PC revolution of the 1980s and the Internet boom of the 1990s.  Since 2007, more than 440 million iOS and Android devices have been activated, with 1 million additional devices across both platforms now activated each day.

On top of this massive and rapidly expanding platform, a software battle is raging.  With very low barriers to entry, and friction-free digital distribution, companies have been feverishly building, shipping and updating applications, intent on capturing and monetizing consumer audiences.  To illustrate this growth, let’s look at the number of available apps in the App Store vs. the Android Market.

This chart is comprised of publicly available data.  Where data wasn’t available for the same month in both markets, we estimated the number of available apps based on interpolation (e.g., approximating a point between two existing data points), or by looking at the growth rate leading up to a specific month.  The number of apps is growing significantly in both markets.  And while the App Store has attracted more apps to date, the Android Market is closing the gap.  Now, let’s turn our attention to total app downloads.

The chart above sums Android Market and App Store downloads per month.  Starting on the left, with January 2010, we show downloads per month every three months, until we reach October 2011.  In October 2011, we estimate over 2.6 billion apps were downloaded.  The number of apps now downloaded is four times greater than this time last year, in October 2010.  With the holiday season under two months away, the 3 billion-mark download per month mark surely will be shattered this December.  Month-over-month, app downloads have been growing at an astounding rate 11.4%.  With app downloads growing swiftly, even faster than the number of apps being made available, let’s now look at app retention.

This chart shows the percent of consumers that continue using an app, since their first use, over 12 months.  At the far left, marked as month “0,” 100% of a consumer cohort begins using an app.  After three months, 24% of them continue using.  After 6 months, this percent shrinks to 14%, and, by 12 months, only 4% are left.   For this analysis, we compiled data from 25 apps downloaded a cumulative 550 million times.（source:flurry）

2）With 60M Monthly Actives, Outfit7 Hints at Powering Distribution For Other Mobile Developers

It’s been awhile since we’ve heard from Outfit7 — the Slovenian company behind those popular talking animal apps — especially after the company switched chief executives.

“The second hundred million has actually come twice as fast our first hundred,” said the company’s chairman Narry Singh. (That’s not actually too surprising for any highly ranked developer given that Apple had cumulatively sold 250 million iOS devices into this month, up from 160 million cumulatively sold during its January earnings call. And Android has gotten to 190 million devices activated this month, up from 100 million in May. So with both platforms nearly doubling devices activated or sold in about a year, you’d expect to see acceleration in the pace of downloads for any top-ranked developer.)

The company now has 40 employees with a headquarters in Cyprus, plus offices in Silicon Valley and Ljubljana, Slovenia, where the company was originally founded. Outfit7, like many other independent, mid-size developers, has an unusual story. It was a group of highly-technical search engineers that happened to stumble into creating character apps.

In the beginning of this year, the company harbored ambitions that it could become the next Hasbro or Mattel with beloved characters that it could license out into other mediums like what Finland’s Rovio Mobile has been doing. The company has yet to announce a big merchandising or licensing deal but says that it has some coming soon.

In the meantime, Outfit7 has shied away from taking funding to step on the gas pedal, instead relying on its own organic revenue to feed growth. Its chief executive at the time, Andrej Nabergoj, stepped down and is said to be working on his next company, also in the mobile apps space. The company’s co-founder Samo Login has stepped up in his place.

In a call on Friday, Singh seemed to emphasize that Outfit7 is now looking to capitalize on its large footprint with users.

“We’re at a point of inflection where we’re at a meaningful critical mass,” Singh said. “Distribution on our network is becoming powerful and it could be something that we could provide to third-party developers. That is the significance our milestone.”（source:insidemobileapps）

A new web-based marketplace for app monetisation company Tapjoy launches tomorrow. The service will allow users to gain virtual currency for the games they play by downloading new apps from its ‘offer wall’.

Tapjoy had previously placed its offer walls into games directly, with players offered the chance to gain virtual currency for the games they were playing if they downloaded another title from one of Tapjoy’s advertisers.

Apple took a rather dim view of the practice, and the distorting effect it had on the iOS free charts as players downloaded games for a purpose other than to play them.

Instead of placing offer walls in apps, Tapjoy places its offers on its web marketplace, which you can access from your iOS device. It’s able to detect which apps are already installed and therefore to offer in-game incentives for players to download apps from Tapjoy’s advertisers.

Apple has already adjusted the way its free charts are compiled, meaning that downloads alone are not enough to hit the top-spot. However, it’ll be interesting to see how the company reacts to Tapjoy’s latest foray into incentivised downloads.（source:pocketgamer）

Elite Systems has delayed the release of a planned collection of classic 8-bit computer game ports for iOS thanks to a trademark claim placed on one of the included games.

The Elite Collection, originally planned for an October 28 release, will include iOS ports of 25 classic 8-bit computer titles, including classics such as M.U.L.E., Stunt Car Racer and Archon II, both as in-app purchases and as standalone downloads.

But Elite Systems managing director Steve Wilcox said the company has received a trademark complaint regarding one of the included games from a company that had previously provided written clearance for its inclusion.

“Since one of our declared goals for the Elite Collection apps is, ‘to restore some order to the market for 8-bit home computer games,’ we needed some time to check the claim,” he said in a statement.

“At the time of writing, that claim is still being reviewed and we felt it would be inappropriate to release the apps until it had been dealt with.”

The delay, which Wilcox estimates will take “a couple of weeks,” will allow the publisher time to port additional titles before the launch, including the first three Bard’s Tale games and post-apocalyptic RPG Wasteland.

The new collection follows on Elite’s ZX Spectrum: Elite Collection, which was released last year and has since grown to include over 150 titles. That collection had grossed over $150,000 as of March, according to the company. （source:gamasutra）

While Mafia Wars 2 may have introduced an isometric view, player avatars and city-building a la CityVille to the Mafia Wars franchise, Zynga’s latest iPhone offering in the series, Mafia Wars Shakedown, does none of that, instead reverting the series back to its “pure” text-based form. While the game hasn’t come out in the US iTunes store as of this writing, we’re here to give you a detailed overview of what to expect once the game launches here.

To start, you will be able to choose an avatar, but this is a simple image-representation of yourself, rather than something that can be customized in-depth as in Mafia Wars 2. From there, you’ll be thrown straight into the mix via a brief tutorial that introduces you to Jobs, Robbing, Goons and more. Instead of energy, here you’ll spend Goons, which are hired thugs that will go out and do your dirty work. In this way, Mafia Wars Shakedown places you in the role of a Don with an already considerable amount of power, with your power only growing as you progress.

Doing jobs is the same process that you’d expect. You’re given a list of jobs that you can complete, all falling under different “bosses.” For instance, your very first boss is in the Bronx district, and goes by the name of Fat Tony. We brought you a look at Fat Tony, the chef, in our look at the game’s trailer earlier today. To be able to attack him, you’ll first need to complete three jobs, each of which requires a specific number of Goons to start, and must be done repeatedly in order to “master” it. Once that’s done, you’ll simply be able to tap on a “Fight” button to see the turn-based battle commence. Weapons fly across the screen and health meters change automatically, with some nice animation effects. While your first fight will be handled alone, you’ll eventually unlock the ability to bring in two members of your Mafia with you to subsequent battles.

As you level up or earn mastery on a specific job (simply do the job enough times to fill the associated meter), you’ll earn extra Goon Points. If you’re familiar with the traditional Mafia Wars setup on Facebook, these bonus Goon Points can be thought of as “Skill Points,” allowing you to assign them to one of three categories: Job, Attack of Defense. Assigning it to Job gives you more “energy” to complete actions, while Attack and Defense make you a more formidable foe when going against bosses, or other real world players.

Speaking of, the Robbery aspect returns here, although it details the Collection feature more often than not. That is, as you work to complete collections in your own game, you can steal collectibles from other players. You’ll be able to choose an unlucky opponent from a list, and can choose which specific item you’d like to steal before attacking. You’re then shown a comparison of your stats, and you can choose how many individual Goons (or energy points) to spend on the attack based on how likely you are to win. The game automatically determines your likelihood of success, and will color-code your options to give you a quick overview of just how many Goons you should spend. Of course, if you’re going against a player of a lower level, you’ll be able to send in less Goons, and vice versa.（source：games）

According to IDC’s Worldwide Mobile Phone Tracker, this was the second-lowest growth rate for the mobile market over the past two years.

Needless to say, the market is now all about smartphones.

“At the same time, the growing presence of companies focused exclusively on the smartphone market – Apple, HTC, and RIM – also demonstrate the impact that smartphones have had on the mobile phone market as a whole.”

Read more on the research here.

And check out this table to see how the OEMs are doing.（source:mobile-ent）