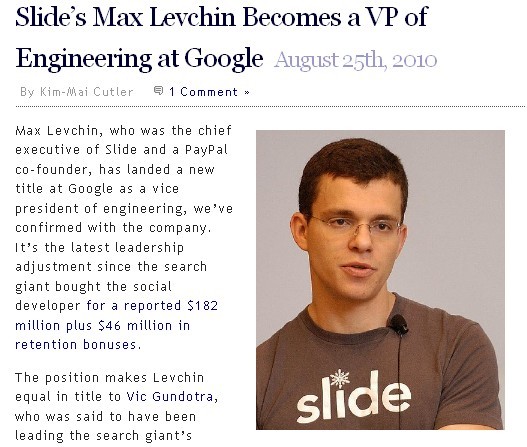 Max Levchin, who was the chief executive of Slide and a PayPal co-founder, has landed a new title at Google as a vice president of engineering, we’ve confirmed with the company. It’s the latest leadership adjustment since the search giant bought the social developer for a reported $182 million plus $46 million in retention bonuses.

The position makes Levchin equal in title to Vic Gundotra, who was said to have been leading the search giant’s social efforts and who has been taking a visible role in championing the company’s mobile products.

Even though Levchin has scored a senior title, he will still have to prove himself as the company hasn’t historically been all that hospitable to outsiders who come in at a higher level. Levchin “will be working on social products with a variety of teams,” according to spokesperson Andrew Pederson.

On the day that Google bought Slide, it also demoed an earlier iteration of its forthcoming Facebook competitor to associate and more senior product managers. Called “Google Me,” that product is early-stage and is changing constantly, from what we’ve heard, so an accurate description of it today may be off-base compared to what is finally released. The earlier version, at least, amalgamated many of Google’s more social products. It is our understanding that Levchin is now leading the development of the latest iteration.（source：inside facebook/sina）