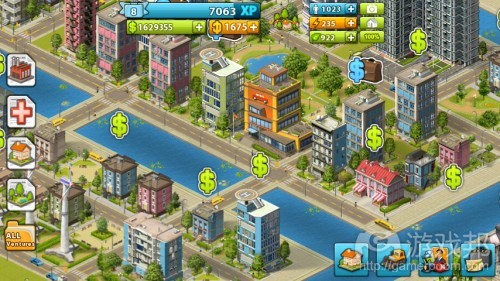 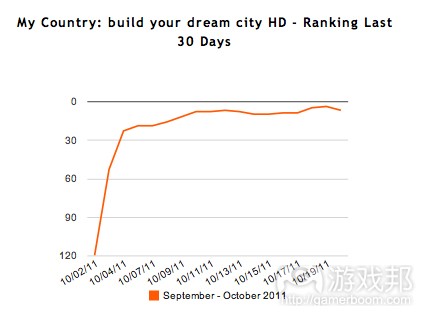 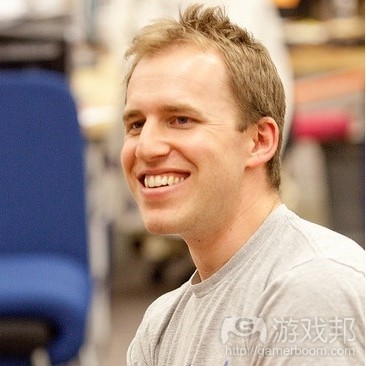 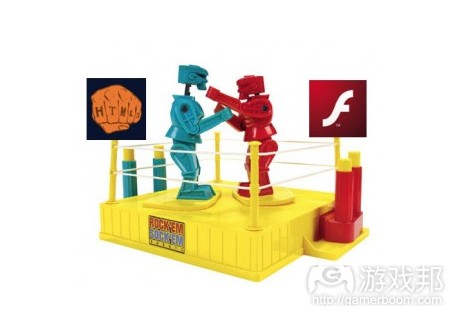 Game Insight — the multimillion dollar mobile-social gaming company run by five women out of Russia — is continuing its winning streak. It said that its city-building sim My Country raked in $300,000 in the first two and a half weeks on the iPad.

You can see below that the My Country iPad app has managed to stay among the top #10 grossing iPad apps in the U.S. for the last two weeks or so. So a $1 to $1.5 million monthly revenue runrate may be what other apps that maintain consistent ranking around there are pulling in as well.

The company, which is made up of 300 male engineers in 12 studios run by five women, operates on 20 different social networking and mobile platforms globally. It does have a presence on iOS. But Game Insight has really found its forte on Android, where it controls two of the five top-grossing games in Android Market under the label Cooper Media Corp. It previously held the #1 spot but was recently knocked down one notch by DeNA-owned Gameview Studios’ Tap Fish.

The company has been unusually forward with its revenue figures in the past, saying that it makes slightly more than $1 million per month in net revenue from its #1 top-grossing Android app. Sources that have looked at the company for either investment or acquisition purposes say that Game Insight’s portfolio is large and that the revenue figures it shares are legitimate. The issue is that with Russian companies, it can be hard to tease out what entities own what intellectual property.

The company was bootstrapped by Alisa Chumachenko, who was a marketing executive at a gaming holding company called Astrum Online that was backed by Facebook investor Digital Sky Technologies. That company was later merged with mail.ru, after which Chumachenko left and started Game Insight with her own capital.（source:insidemobileapps）

2）One year on, MiniClip’s smartphone division clocks up 50 million downloads on iOS

Having built up its standing in Flash games, it’s safe to say MiniClip’s decision to add mobile to its roster can be crowned a success, with cumulative downloads on iOS surpassing the 50 million mark.

The studio’s year one library – which includes the likes of Monster Island, Fragger, Gravity Guy and iStunt 2 – was clocking up 1 million downloads a day at its peak, thanks to MiniClip taking charge of the top three spots in the App Store’s free releases chart in the US.

No cap on the Clip

“We’re simply blown away with the success we’ve achieved in such a short time with our new mobile division,” said MiniClip’s mobile head Sergio Varanda.

“The team we’ve assembled is world class and will help to continue to drive our incredible mobile growth over 2012 and beyond.”

Things are only getting better, too. MiniClip reports its most recent release – iStunt 2 – is the studio’s best selling release to date, having amassed 700,000 downloads in less than three months.

As a result of the studio’s success, MiniClip is now expanding beyond iOS, working on titles for Android, Symbian and Windows Phone. （source:pocketgamer）

West Pier Studio is looking to focus on development of online and mobile titles, with a particular aim for innovative gameplay and creating its own IP.

The team will also be looking to put its past experience to use as a hire studio, with over 60 years of experience in the industry between the five of them.

“We believe the industry is changing so fast that only those adapted to rapid, agile development for emerging platforms can take full advantage,” the team said in a statement.

Black Rock was officially closed down earlier this year by parent company Disney Interactive Studios, and a number of indie development companies have since sprung forth from the closure.

When Facebook launched its mobile apps and games platform on iPhone and iPad, we were admittedly confused. But after Facebook CTO Bret Taylor (pictured) spoke with mocoNews, we have a better idea of what Facebook is getting at with “Project Spartan.” According to Taylor, Facebook hopes to go 100 percent cross platform with Facebook Mobile through the mobile web, but its master plan goes deeper still.

“It really addresses some of the areas I’ve heard a lot of concerns about from mobile developers, and it plays to our strengths,” Taylor told mocoNews. “For startups, it’s very difficult to get their apps discovered. They have a honeymoon period in the app stores where they might be in a top 10 list and get a lot of downloads, but once that honeymoon period is over, discovery is very difficult. By integrating with these social channels in mobile, they can get discovered in really organic ways.”

Facebook looks to bring the discoverability of Facbook games and apps to mobile. Sure, Facebook has the support of some major game creators with HTML5-based versions of Words with Friends, FarmVille and even wooga’s new Magic Land. But at the moment, users have to search for these apps through Facebook’s iOS app or mobile web presence–not exactly an ideal method for discovery.

It sounds like Taylor and Facebook look to grow the mobile and social games industries all at once across all platforms including Android, Windows Phone and Blackberry. To do that, Facebook is encouraging more developers to create HTML5 or native mobile app versions of their social games that Facebook Mobile can redirect to, which is about the only way we see this method working. However, with game shares (at least for non-gamers to see) almost entirely in the Ticker–which doesn’t exist on mobile–where do the new social gamers come in?（source:games）

Asked if multiple web technologies could flourish side by side, Google’s Todd Kerpelman replied, “Yeah, I don’t see why not.”

Google launched its Facebook competitor Google+ this summer. In August, the company announced its first slate of games for its social network, including Rovio’s Angry Birds and Electronic Arts’ Dragon Age Legends, among others.

In Kerpelman’s eyes, the competition between HTML5 and Flash is not necessarily a zero-sum game. But the true outcome will be up to web-goers and web developers.

“I think there’s probably a limit in terms of the number of plugins a user wants to have to install, and from a developer’s perspective, they don’t want to have to port a game to four different technologies, obviously,” Kerpelman conceded.

“That being said, I do think it’s possible for all these technologies to live together. I guess we don’t take the approach of ‘in order for one technology to succeed, others need to fail,’” he explained. “It certainly is possible for several technologies to be viable and workable. If the players are happy, and the developers are happy, there’s no reason why they can’t all be successful.” （source:gamasutra）

Jones joins Tapjoy having most recently served as America’s regional VP at Yahoo!, where he is accredited with helping scale revenue from $200 million to $350 million.

His main responsibility at Tapjoy will be to run advertising and ad operations – a role to which he brings over 20 years of industry experience.（source:pocketgamer）