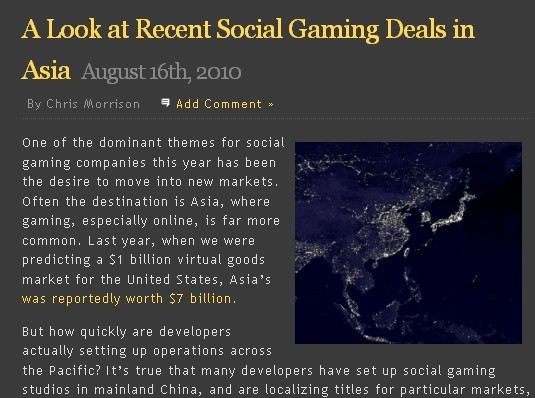 One of the dominant themes for social gaming companies this year has been the desire to move into new markets. Often the destination is Asia, where gaming, especially online, is far more common.

Last year, when we were predicting a $1 billion virtual goods market for the United States, Asia’s was reportedly worth $7 billion.

But how quickly are developers actually setting up operations across the Pacific? It’s true that many developers have set up social gaming studios in mainland China, and are localizing titles for particular markets, like Japan’s Mixi social network.

But overall, Southeast Asia has generated the most traction for social gaming companies — on Facebook. Social networks in mainland China tightly control third-party access, and byzantine government gaming regulations make the market even less accessible. Mixi and other Japan-based sites are lucrative, but smaller than some others in the region and have a reputation of being culturally impenetrable.

The story isn’t so much that social game developers are leaving Facebook for Asia-based social networks. It’s that these companies are following Facebook’s expansion to Asia — and taking advantage of regional talent and markets on the side.

The most active American company, by far, has been Zynga. In some ways its first Asian deal was its acquisition of GoPets last November, which although a California-based company, had its roots in South Korea.

Zynga started its Asian dealmaking in earnest in late spring:

* In May, Zynga acquired XPD Media, a Beijing-based social game developer with 40 employees

* Earlier this month, Zynga picked up Unoh, a Japanese developer, for a reported $11.6 million

In July, we were reading in the Chinese press that Zynga had acquired two more companies in Chengdu City, but a Zynga spokesperson denied that any such deals had taken place. For the moment, the company is probably focusing most intently on Japan.

Softbank hasn’t just bet on Zynga; the Japanese tech giant also placed a $10 million investment with RockYou in June, following an earlier $50 million round. Those investments aren’t one-way for Softbank, which probably hopes that the companies will create Japanese games that it can profit from through its web or mobile services.

Among the few other deals what we’ve heard about, there is also a partnership between Japanese mobile developer DeNa and the social platform OpenFeint, and various publishing deals between small Western developers and 6waves, which is based in Hong Kong.

As with Softbank, those are both cases of Japanese companies reaching across to American companies — a trend that may turn out to be more prominent than the reverse, given the larger and more entrenched market in Asia.

In April, we also reported that two of China’s biggest gaming companies, Tencent and Shanda, were looking at acquiring Crowdstar and RockYou, respectively. Tencent itself has also built Facebook games, while there are a number of smaller Chinese companies on Facebook who likely aren’t sizable enough for large acquisitions but could enter other deals, including 5 Minutes, Boyaa and Happy Elements (links go to our coverage).

It may be challenging to get visibility into what these companies are doing in Asia. As RockYou cofounder Jia Shen commented in a recent interview with us, Asia’s social networks place little value on transparency, making it a guessing game as to which companies are doing well.

But it’s difficult for any company to cross the Pacific and expect to do well alone. During the rest of this year, we’re likely to see more acquisitions and partnerships, as well as the first signs of success from the most serious efforts at internationalization.（source：inside social games）