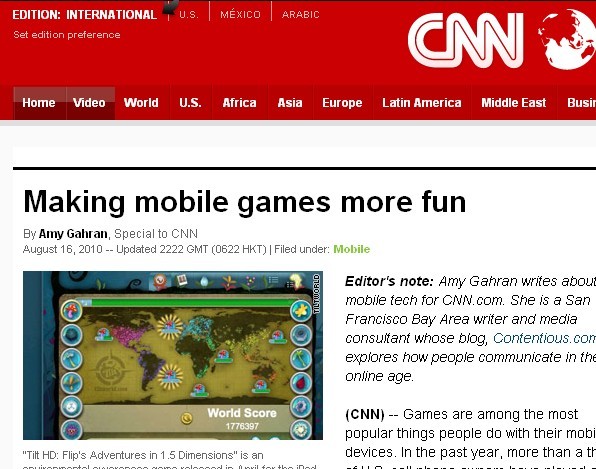 Games are among the most popular things people do with their mobile devices. In the past year, more than a third of U.S. cell phone owners have played a game on their phone. Also, up to a quarter of all iPad apps are games.

But what makes a mobile game really fun? According to Nicole Lazzaro, founder of XeoDesign and a noted expert on improving the player experience, the key to the next generation of really fun mobile games is to make them social.

“Mobile games with asynchronous social play will be a success,” she said. “That’s the idea that you can interact with people in the real world, but you don’t have to be in the same place or play at the same time.”

Lazzaro’s research indicates that social connection (“people fun”) is one of the four main reasons why people play any kind of game. “Games have always been an excuse to hang out with your friends.

Mobile games give you an opportunity to have that experience in short micro-sessions, wherever you happen to be,” she said.

According to Lazzaro, the next step in making mobile games more fun is to increase players’ ability to check in on, catch up with and interact with their friends via games. This means looking beyond the competition dynamic that drives many current games.

A big part of “people fun” is social grooming, such as hitting the “like” button on a friend’s Facebook status. Such “like” mechanisms could help make mobile games more social, like shouting “Good one!” when a friend scores a goal in a real-world game.

“I haven’t seen this strategy much yet in mobile games,” Lazzaro said, “but there’s a big opportunity to use it to create mobile games that are truly social. There could be games where you get to like not just who your friends are, but the actions they take.”

She predicts that over the next five years, mobile games will get more interesting and fun through deeper integration with social networks, where players collaborate to accomplish things. This would go beyond “cow clicking” social networking games like FarmVille and instead borrow interactive elements from party games like Cranium, Pictionary and Charades.

“Charades is fun because you know your fellow players. It gives you an opportunity to do silly things in front of your friends,” Lazzaro said. “This promotes social bonding, it helps people feel closer. It also helps you learn more about your friends and build trust through interaction.”

Lazzaro also noted that the location awareness and photo/video features built into mobile devices could support games that integrate real-world actions. Such games could track and announce not only which actions you took, but where you did them — and provide visual evidence.

This would blur the distinction between games and real life in interesting ways. Foursquare is one of the most popular mobile applications because it’s both location-aware and a form of social game, Lazzaro said.

Games are basically a tool for stimulating emotions. Lazzaro thinks mobile social games can — and should — include more prominent collaboration dynamics — ways for players to communicate about in-game tasks, which raise emotions and make games more interesting.

“I see huge opportunities for mobile games to make a difference in the real world,” Lazzaro said. Players could collaborate to clean up a park, protect a watershed, drive less or contribute to a cause.

Lazzaro’s game company XeoPlay is incorporating social features and real-world connections into Tilt HD: Flip’s Adventures in 1.5 Dimensions, an environmental awareness game released in April for the iPad. (An iPhone version is due out soon.)

Currently, Tilt players accumulate “TiltPoints.” GamersInfo.net explains that these points can be “assigned to an ecological hotspot,” such as the site of this year’s volcanic eruption in Iceland or the Gulf of Mexico oil spill.

A map on the TiltWorld.com site shows a geocoded global layout where players are most active, displaying the total world points in play, a world score of total TiltPoints accumulated and the current challenge players are aiming to take on.

Lazzaro wants to be able to correlate the virtual TiltPoints to real-world value and therefore “make a tangible difference in places around the world where it could do the most good.”

So what makes mobile games not fun?

“At this point, the biggest thing that goes wrong is when game designers … [simply import] a game from another platform and adapt it for a smaller display, without distilling the essence of key features or considering shorter play sessions,” Lazzaro said. “It’s basically the same first-person shooter that you played on the Xbox. Boring.”