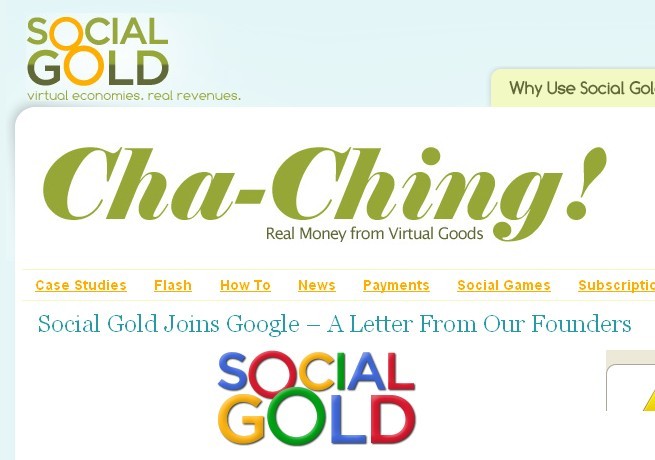 We are excited to announce that Jambool is becoming a part of the Google family today.

Jambool started as a social collaboration platform in 2006. In 2007, we shifted our focus to build applications on social networks. Along with success, we found fun and lucrative ways to monetize our apps – specifically virtual currency and goods. That led us to create a platform to help developers create, host, manage and monetize their virtual economies.

Social Gold has grown by leaps and bounds since it went live in 2008. In the first half of 2010, we’ve processed more than double the entire payment volume we processed in all of 2009. And we’ve welcomed hundreds of developers to our platform. The fact that our highest revenue day was in the last week attests to the continued growth of online gaming.

Our vision is to build world-class products that help developers manage and monetize their virtual economies across the globe. When the opportunity arose to join forces with Google to execute against this vision, we couldn’t pass it up. We are thrilled to bring the Social Gold platform to Google’s global users. And we invite you – our customers, partners, and friends – to continue on the journey with us.

Over the last few years, we have had the great fortune of working with an incredible team. Every day, we are amazed and humbled by what they have accomplished. We have had terrific support from our partners, investors and advisors; and we are lucky to have worked with each of them. Thank you!

As a team, we remain passionate about innovating on behalf of our customers. We aim to deliver the most frictionless, seamless transaction experience inside applications and games on every platform. We are thrilled to be part of Google, and we look forward to the exciting road ahead.

The game has only just begun.

Google has been on a buying spree lately in social gaming. Earlier this week on Monday, the search giant acquired social app developer Slide. Now it has bought virtual currency platform developer Jambool.

Jambool founders Vikas Gupta and Reza Hussien confirmed the rumors on Friday by officially announcing the purchase on their blog. Details of the acquisition remain unclear, though TechCrunch reports that it may be around $70 million to 75 million, according to unnamed sources.

The San-Francisco based Jambool operates Social Gold, a monetization platform that developers can use to integrate payment systems into their games and apps.

Last month, Google was also rumored to have made a $100-$200 million investment in social games developer Zynga, maker of FarmVille. This investment may represent a step towards a Google Games site.

What is clear is that Google is interested in building some sort of new social game product. Such a product would certainly have big implications for social gaming, an area that even traditional game publishers like Electronic Arts have been trying to break into.

But Google’s game ambitions may also be a social network play, aimed at putting it in serious competition with Facebook. To date, Google has largely been unsuccessful with its social products (i.e. Buzz, Wave and Orkut), and it’s no secret that games has been an incredible hook for Facebook. Google may be hoping that games could also be its social network hook to attract users.

I got on the phone with Jambool’s chief marketing officer Mike Quigley, who couldn’t disclose specifics of the recent deal, or Google’s future strategy in social gaming. But Quigley did say the deal represents confirmation of the importance of virtual currency and microtransactions as part of online business.

“I think one of the things this acquisition shows is an endorsement of the fact that the way online commerce and monetization of apps is changing,” he says.（source：forbes/jambool blog）