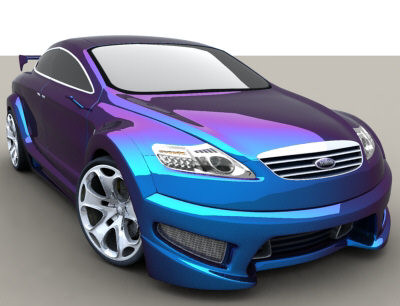 With social game mega-publisher Zynga recently deciding that hundreds of thousands of players apparently aren’t enough to sustain games like Roller Coaster Kingdom, Ponzi Inc. and Street Racing, we’ve been wondering: How big does a game have to be, exactly, to justify its existence to Zynga. The answer, apparently, is pretty big, as industry expert Nicholas Lovell discusses over at Develop.

Lovell goes through some back-of-the-envelope calculations to estimate just how much a game like Street Racing brings in from players, and how much it costs Zynga to maintain. At first glance, the inflows seem pretty healthy — if even two percent of players are paying an average of $15 a month on the game, Zynga is bringing in a cool $1.5 million a year. 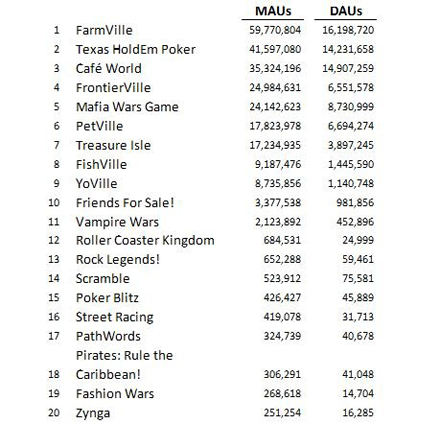 But one-and-a-half million dollars doesn’t go as far as you’d think. To keep the game going, Zynga not only has to hire developers (which can easily eat up over $95,000 a pop annually) but also spend money on marketing, customer acquisition, servers and infrastructure. Lovell estimates these costs could easily exceed $1.5 million a year for a company like Zynga.

Even if a smaller game makes a small profit, though, Lovell argues that those resources might not be worth the opportunity cost to Zynga. After all, why sink millions of dollars into a tiny game like Street Racing when that money could help pump up games like Farmville and Frontierville — games that easily bring in tens of millions of dollars every year.

To put that into context, it’s one of Zynga’s smaller titles (see table) and is less than 2% the size of Zynga’s #5 title (Mafia Wars).

There are two obvious questions: Why has Zynga shut down Street Racing, and could it have gone about the process of shutting down the game in a manner less calculated to offend its fans?

The business model of an online games company is pretty simple. You build a small, cheap prototype of a game. (Cheap means anything from $20,000, the initial investment by Bigpoint in Dark Orbit to $2,000,000, the cost of Bigpoint’s upcoming APB-style game Poisonville.)

Then you sit back and watch to see if people like it. People must have liked Street Racing, as at one point, over 3 million people were playing it each month. So Zynga will have pumped more money into it to keep developing new features and new virtual goods. It will have been watching the metrics like a hawk, seeing if Street Racing is still growing and more importantly if the customer acquisition cost was justified by the conversion rates to paying users.

Let’s do a quick (and entirely hypothetical) bit of arithmetic. Street Racing currently has 419,078 users. Peter Relan, Chairman of Crowdstar which develops Happy Aquarium, says that 1-3% of social games players purchase virtual goods. Street Racing is quite a high intensity game, so we’ll estimate 2% of Street Racing players buy something each month. That’s 8,382 payers per month.

Now we have to guess how much they spend. There is much confusion on whether people are quoting ARPU (Average Revenue Per User) or ARPPU (Average Revenue per Paying User). Nils Holger-Henning says that Bigpoint has an ARPPU that is better than World of Warcraft, so I generously estimate Street Racing’s ARPPU at $15.
In that case, Street Racing is bringing in $125,000 a month or $1.5 million a year.

Probably not, for two reasons. The first one is operating costs. Playfish estimates it takes 6-8 people, minimum, to launch a game. The number might fall a little after launch, although you need

A recent interview with Vonchurch, the specialist recruiter, estimated the average salary for a West Coast social games developer at $95,000 (although some commentators believe that is on the high side). Throw in the on-costs of an employee (say, their salary again), and you’re looking at staff costs of $95,000 x 2 x 8 = $1.5 million a year. And that’s not counting customer acquisition spend, marketing costs and running the servers and infrastructure. (I ran those numbers separately, and happened to come up with $1.5 million for both revenues and salaries independently. Honest.)

But even if that stacked up, there is a bigger issue for Zynga: opportunity cost. Street Racing makes $1.5 million a year by my estimation. Using the same assumptions, Zynga’s top 10 games are each making over $12 million a year.

The business model for social games is to try-fail-iterate. But it is also to be brave enough to shut down projects that aren’t scaling. And Street Racing clearly fits that category.

Could Zynga have handled the shut down better?

Since its inception, Zynga has been criticised for poor customer service. And I think that the handling of the shutdown of Street Racing is no exception. Just look at the official announcement (subsequently removed).

Street Racing is an edgy, street racing game. Frontierville is a family-friendly upgraded version of Farmville. This announcement is like Activision saying “Hey, World of Warcraft players, we’re about to shut down WoW, why not run along and play Club Penguin instead.”

I called it “fantastically stupid” last week, and I stick by that comment.

But Zynga was in a tough position. It is shutting down a game in which people have bought virtual goods. This, I think, is the heart of the rabid reaction that fans have had to the announcement, including petitions for boycotts and hundreds of comments on Develop and other sites.

We are seeing a transition from games as a product – bought in a box and clearly something which you own – to games as a service – which exist in the cloud and for which you essentially pay to access. When that access is gained through paying a subscription, consumers seem more comfortable when it shuts down: there was complaint when NCsoft shut down Tabula Rasa, for example, but because people were paying for access, they accepted that when it shut down, they lost the access but that was alright, because they were no longer paying a monthly subscription.

Of course, Zynga has the right to do whatever it likes. Zynga’s Terms of Service, which you accept whenever you install a Zynga application, says:

This will become an increasingly thorny issue as more companies shut down their virtual goods-based games (see Jas Purewal’s summary of the legal implications of virtual goods over at GamerLaw if you’re interested.)

Above all things, Zynga did not want to create any precedent that it owed people money for their virtual goods as a result of shutting down Street Racing. That would be a huge step towards acknowledging that virtual goods were property and notwithstanding the terms of the EULA, that consumers had rights vested in them.
Zynga can’t afford to let that happen.

So they had no choice but to just shut the game down peremptorily (although they have a subsequently offered Zynga currency refunds to anyone who purchased an item in the last 90 days, plus 100 units of additional premium currency). Once they had decided to shut down the game, they could not refund people who bought in-game items without making a fundamental (and potentially ruinous)

change to the way in which they, their consumers and the legal profession view virtual goods.

This is just the beginning

Zynga is the master of try-fail-iterate. They tried to close down Street Racing quietly and handled it very badly. That won’t stop them trying again. Next time, they won’t  try and fob people off with a genre-irrelevant game. They will consider how to handle people who have bought in-game goods recently. They may even offer incentives to transfer to another Zynga title.The one thing that you can be sure is that Street Racing won’t be the last reasonably-popular online game to be shut down because the economics no longer stack up.