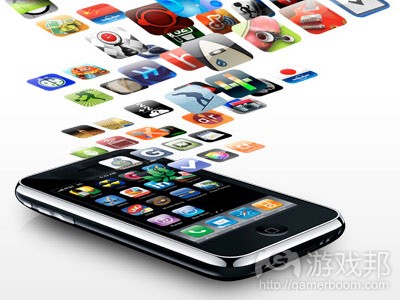 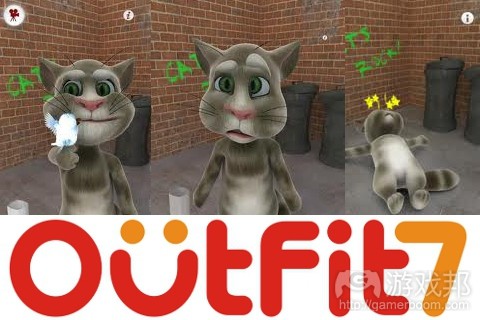 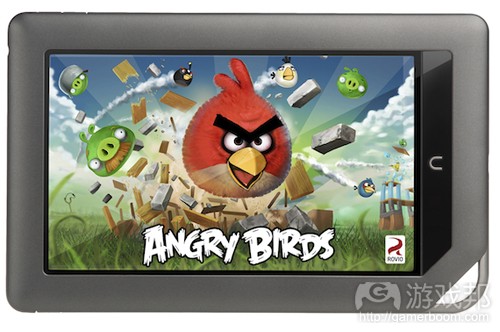 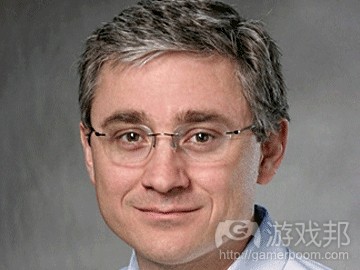 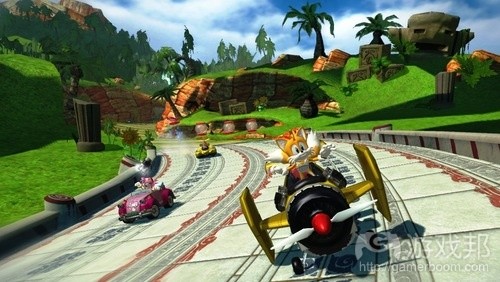 IDC says the bigger story behind the numbers is an impending shift away from the current reliance upon mobile app download purchases as the primary focus of app monetization.

Rather, IDC says, developers will focus increasingly on in-app purchasing and advertising to fund business models, a shift that the firm says is most evident in the free app category.

IDC says its outlook on the mobile application market is informed by conversations with a “wide variety of players in the mobile app marketplace”, as well as financial and product announcements and its quarterly survey of Appcelerator’s 70,000+ mobile app developer base.

Two months ago, IDC reported that the global mobile phone market had ballooned in the first quarter of this year, growing 19.8 percent year-over-year, mostly due to the meteoric rise of smartphone shipments.（source:techcrunch）

2）Outfit7 climbs the beanstalk to find a mainstream audience

The Talking Friends have taken yet another step toward the entertainment industry. Last week, mobile gaming company Outfit7 announced a signed deal with talent agency William Morris Entertainment. Now, they have partnered with Beanstalk, the licensing agency behind brands like Mr. Clean, Jack Daniel’s, Ford Motor Co., AT&T and more.

Beanstalk plans to launch a global licensing program for Outfit7 that will include toys, games, books and other goods tailored to children of various age groups. Products will engage children in speech, motor skill and sensory experiences as well as upper-level elements such as reading, writing and music.

Some of Outfit7′s key demographics may be surprising. Children aged two through eight as well as tweens are obvious targets, but also included are teens and adults – two demographics that the company already engages, according to chief marketing officer Paul Baldwin. Outfit7 has previously stated its desire to become, like Pixar, a company “for all ages.” It’s even planning products in markets like home décor that could attract older audiences. Enough college dorm rooms have a Spongebob Squarepants plushie for me to believe there is money to be made in older demographics.

Beanstalk CEO Michael Stone takes a lot of interest in the evolution of apps as well as large-scale entertainment. “While video games, digital and online properties have a long history of brand extensions and licensing, we are just witnessing the tip of the iceberg for app-brand licensing.  This is the new frontier of licensing and we are delighted to be a part of it.”

Even Outfit7 employees have had experience taking video games to Hollywood. Baldwin cited his role in acquiring an agent for the Lara Croft video game character, which helped launch the digital dame into a key role for Angelina Jolie.

Outfit7 currently has 11 Talking Friends with 135 million downloads since July 2010. CEO Andrej Nabergoj is a speaker at GamesBeat.（source:venturebeat）

At this pace, there have probably been just over 122 million Android devices activated, up from the 100 million figure the company announced in May at the I/O developer conference.

At that point in time, Android was seeing 400,000 device activations per day. Overall, this is still falls short compared to the reach of Apple’s iOS platform, which has seen more than 200 million devices cumulatively sold. But the gap is quickly closing.（source:insidemobileapps）

Barnes & Noble said Tuesday its Nook Color e-reader and tablet would be the first device to offer a real-world tie-in to the insanely popular Angry Birds game.

The original Angry Birds title hit 140 million downloads in April, and that number continues to climb as the game flies to every platform it can.

What’s different about the new Nook Color version is the inclusion of the “Magic Places” feature. The feature opens up extras when users play the game while connected to the Wi-Fi network at a Barnes & Noble store. Players at the store will get to use the “Mighty Eagle” bird—which basically demolishes everything on screen—on levels for free. Developer Rovio also said there will be other in-game rewards and unlockable content for users who come back several times.

Barnes & Noble will be scratching Rovio’s back by offering shelf space to Angry Birds merchandise, such as games, toys and merchandise. There will also be free Angry Birds stickers and temporary tattoos for children（source:venturebeat）

With the likes of Chillingo and Firemint already under its belt, it’s hard to ignore EA’s commitment to the mobile market.

Just how important portable platforms – and the kind of games that inhabit them – are to the publisher, however, has been revealed by EA Games head Frank Gibeau, who has made it clear they no longer play second fiddle to its offerings on PC and console.

“The free-to-play group inside of EA Games is growing extremely fast – we’ve got 17 million users.”

Free-to-play exists beyond mobile in EA’s output, with PC release Need for Speed World enabling the publisher to reach territories such as Russia, Ukraine and South America.

On any platform, however, Gibeau claims what’s important for EA is such offerings don’t impact on the publisher’s existing business.

“Frankly when they get to scale, have huge audiences, are very profitable, they’re not cannibalising the main games and they actually reach markets that we’re not currently serving,” he added.

“It’s a very exciting time from our perspective because it’s not all about consoles. It’s about smartphones, tablets, free-to-play, browser, social.”

Gibeau also cast further light on Origin – EA’s refreshed online distribution network with built in social features – and the role it will have to play in helping the publisher reach its multiplatform goals.

“We’ve been changing the way we develop games so that we can have them on smartphone, tablets, in addition to console and PC,” he added.

“It’s all part of the digital transition that we’re going through and Origin is the platform on which we’ll be able to publish and service customers on mobile as well as PC platforms, and then link to the consoles in unique ways as they develop.”（source:pocketgamer）

DeNA today announced they opened an office in South Korea on June 13. DeNA Seoul Co., Ltd. is being led by Makoto Haruta who joined the company as early as 2000 and was the CFO – until DeNA did away with titles for their executives a few months ago (he is now listed as Director and Chairman).

Haruta’s charter will be to steer partnerships with Korean companies, including game developers, to bring content to the Mobage network in South Korea, Japan and the US.

The South Korean office is the fourth outside Japan for DeNA, which is also present in in China, the United States and the Netherlands.（source:serkantoto）

When action game Darksiders came to home consoles last year, it was dismissed by some as derivative of Zelda and God of War. Of course, only a fool would dismiss a game on the grounds that it’s similar to two great games, and those who shunned Darksiders for this reason missed out on a solid romp.

World of Oil, a new iOS game from developer Lemico Soft, is not like Darksiders. It’s not like Darksiders at all. While it ostensibly – and blatantly – steals from both World of Goo and Feed Me Oil in terms of its presentation (see below), for its gameplay it borrows from a different game altogether: Pipe Mania.

Let’s break that down.

World of Goo is a hugely successful indie game which was a hit on PC and Wii before coming to iPad last year. It took a Pocket Gamer Gold and won in the iPad Game of the Year category in the Pocket Gamer Awards 2011.

Feed Me Oil is a popular physics puzzler published by EA-owned iOS hit factory Chillingo. It took a Pocket Gamer Bronze and reached the top of the App Store Paid charts.

Pipe Mania is a forgettable puzzle game from 1989.

World of Oil looks like two good games and plays like one boring game. Assuming it hasn’t been pulled for passing off by the time this story goes live it’s available now as a free app (though you’ll have to pay 59p to unlock the whole thing.)（source:pocketgamer）

Earlier this month, we highlighted the partnership between Sega and OpenFeint in the upcoming iOS racing title Sonic & SEGA All-Stars Racing. Now, the game is out on both the iPad and iPhone and since its June 23rd release, has risen rapidly up both respective paid app charts reaching #21 on iPhone and topping the iPad lists at #1.

Running $4.99, the game is, for all intents and purposes, a Sega-branded rendition of the popular Mario Kart franchise, hosting the same core go-kart racing mechanics. However, it replaces generic carts with vehicles that show off a little bit of each character’s personality. From Sonic to Super Monkey Ball, the game places users into original courses from around the various Sega franchises.

Overall, Sonic & SEGA All-Star Racing is a decent game for what it is, but it isn’t exactly original from a conceptual point-of-view. It’s the same game as the Mario Kart of yesteryear, with many of the mechanics and items emulating the original. Nevertheless, with a multitude of game modes and unique and interesting race tracks, this Sega title is still fun to play.（source:insidemobileapps）