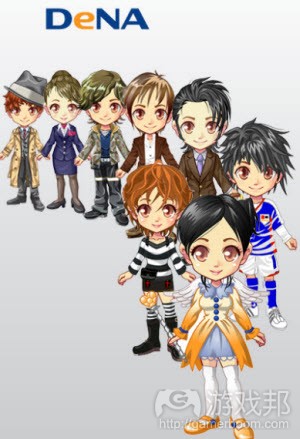 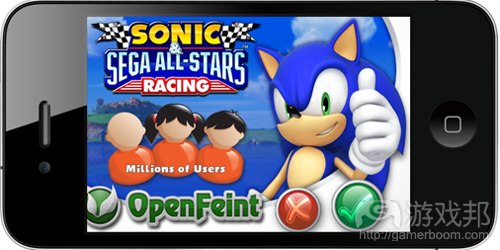 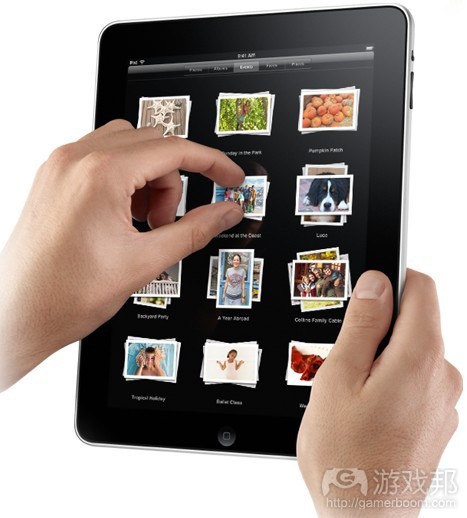 Boston mobile game platform developer Brass Monkey Inc. has acquired Emotely, a San Francisco-based software developer which will bring HTML5 to the Brass Monkey platform, according to the company.

No financial aspects of the deal were disclosed. Buying Emotely also gives Brass Monkey a presence on the West Coast. As part of the deal, Emotely’s founder Francois Laberge has been named chief innovation officer at Brass Monkey.

Chris Allen, president and CTO of Brass Monkey, said in a release, “Flash is no longer the only choice for creating sophisticated experiences that run in a web browser.”

Brass Monkey’s technology allows a smartphone to be used as a game controller for games running on a PC or a Mac. Emotely, in turn, has created a mobile app based on HTML5 that turns phones and tablets into remote controllers for HTML5 games and apps. （source:masshightech）

Ngmoco, the mobile gaming startup that was acquired by Japan’s DeNA last year, is preparing to launch its social network for mobile games in the global market.

DeNA already operates the Mobage mobile social network in Japan, where it has a booming billion-dollar business and tens of millions of users. Ngmoco has combined its ngCore technology for cross-platform publishing with Mobage to create a mobile social entertainment network for the whole world. As we’ve noted before, Ngmoco and DeNA have huge ambitions for Mobage.

Simon Jeffery, chief publishing officer at Ngmoco in San Francisco, said in an interview that the company is now inviting developers to sign up for its Sandbox development environment, which allows developers to test and develop their games so they can become available on the Mobage platform. There are already more than 100 games on the platform, and more are in the works, Jeffery said.

The big advantage of running a global network is that it can eliminate geographic borders and platform barriers as well, Jeffery said. For instance, by publishing a game on Mobage,developers will be able to reach players around the world. The game will also be able to run on a variety of mobile platforms and launch games around the world almost instantaneously.

That’s because then ngCore technology allows a game to be created in Javascript that can be converted into a native format for the device that it will be running on. That means the game can run fast and run on a bunch of smartphones and tablets. The system also uses Open GL graphics libraries if the game needs to run at a faster speed. The result is that a game created for Mobage can run just about anywhere, Jeffery said. In that respect, it resembles Sibblingz, which has also created a cross-platform game development platform.（source:venturebeat）

Sporting a mini social network of his own in recent years – including the rather questionable Big the Cat – Sonic is set to pull off a similar trick on iOS, linking up with gaming network behemoth OpenFeint.

The company has come together with Sega to implement OpenFeint’s features in Sonic & Sega All-Stars Racing, due to hit the App Store later this summer.

Importantly for OpenFeint, the deal represents yet another major franchise – and, indeed, major publisher – tapping up the network.

“Cross platform mobile social gaming is a major goal of Sega and we believe Sonic will continue to entertain and inspire consumers while on the go,” said Sega’s digital business VP Haruki Satomi.

“OpenFeint offers a great platform to launch games on, whether it be through access to their enormous player community or the use of great cross-promotional features like developer announcements.”

Sonic & Sega All-Stars Racing will come equipped with all of OpenFeint’s standard social features, including the ability to add friends, unlock achievements and post high scores on the network’s leaderboards.

“20 years ago, Sonic The Hedgehog changed gaming forever and we’re proud to help Sega bring the fun and excitement of Sonic to a new generation of gamers that play against each other, on the go,” added OpenFeint CEO Jason Citron.

It’s been one of the main questions in the industry for the past 12 months, so does anyone know how developers monetise games on Android?

That was the question at one of the breakout sessions at Qualcomm’s Uplinq developers conference.

“For us as Android publisher, you have OEMs, app stores, and operators, and you have to work with all three,” said Markus Kassulke, CEO, HandyGames, which has over 20 games, mainly free on Android Market.

“You have to be experimental with your monetisation methods on Android. You need to be flexible and agile and ensure you’re not spending too much money upfront,” reckoned Alex Caccia, president at UK tools outfit Ideaworks Labs.

Shenna Hogan, director of business development at Sony Ericsson, had a different tack.

“Freemium games have the most potential for unbranded products,” she said. “The data we’re seeing is that free games can have up to 20 times more downloads than paid.”

She also pointed to other channels that OEMs can offer such as Sony Ericsson’s own tab in the Android Market.

“One of our development partners had a 50 percent boost in downloads using this,” she revealed.

Light in the tunnel

Yet despite the difficulties in the current market, there is hope.

“Our sales on Android are really taking off strongly,” said Baudouin Corman, sales and marketing director at Gameloft US, which is a big supporter of premium priced Android titles.

“Certainly iOS is a more mature market, but let’s compare it with Android Market in six months time and see where we are.”

He didn’t give further details about numbers or which titles were performing well however.

“It’s a complex market, but all the key players in the value chain want good content to promote their business,” Caccia pointed out.（source:pocketgamer）

5）Android handset sales up 77 per cent in Asia

Findings from GfK Asia showed 19.8m mobile handsets were purchased in Cambodia, Indonesia, Malaysia, the Philippines, Singapore, Thailand and Vietnam during the first three months of 2011.

Most of them were feature phones, shipments of which hit 16.3m.

Within this total, Android contributed 580,000, a 77 per cent leap. That’s impressive, but overall the Google OS still lags iPhone by a long way.

Though the unveiling of Windows 8 suggests tablets are reshaping the PC industry rather than destroying it, Goldman Sachs analyst Bill Shope has posted a report claiming Apple executives are bullish about iPad’s chances of superseding the traditional computer.

Shope met up with Apple COO Tim Cook, CFO Peter Oppenheimer and retail head Ron Johnson, posting in his report that the company’s bigwigs are “overtly optimistic” about the fortunes of iOS in the coming years.

Cooking up a media storm

Specifically, Cook is believed to have said he thinks the tablet market – led by iPad – could and should surpass demand for PCs in the future for a sustained period.

As obtained by Apple Insider, Shope’s report notes that Cook “sees no reason why the tablet market shouldn’t eclipse the PC market over the next several years.”

As a result, Shope went on the predict that Apple will sell 8.1 million iPads in the current quarter – an increase of 72 percent year on year.（source:pocketgamer）

Google has just updated the Android platform’s version numbers for the month of June and it hasn’t changed all that much since last month. While Android 2.2. Froyo is still leading the pack with over 60% of all devices, it is beginning to see a slight decline to make way for Gingerbread.

Gingerbread is almost in double-digit numbers as it stands today, which is a good thing but it’s hardly impressive. Since the API levels between 2.3.3. and 2.3.4 are the same, the latter won’t be carving out its own piece of the pie. Collectively at 9.2% Gingerbread is slowly growing and will eventually take the reins from Froyo as the year goes on, and hopefully in a timely manner. Froyo itself is still on 64.6% of all Android devices today but we’ll likely begin to see it decline in the months going forward due to handset-makers shipping new phones with Gingerbread pre-installed and popular, older Android handsets receiving the update, like the Droid X and Evo 4G.

Android 2.1 just won’t die and it’s still almost a quarter of all running devices. It also doesn’t help that AT&T and Sony Ericsson seriously went forward with the Android 2.1 update for the Xperia X10 instead of killing it off and going with Froyo. Android 2.1 was introduced in January of 2010 alongside the Nexus One, making it about a year and a half old. Do yourself a favor before you grab and Android phone: check what version it’s on and don’t even consider it if it’s below version 2.2. Sorry, X10.

Cupcake and Donut collectively make up a little less than 5% of the pie, and we’re happy to see it leave. Still, we have our respect for Cupcake, as it brought one feature that differentiates Android from the rest – widgets. Third-party widgets, at least.

Last but not least is Honeycomb, and we’d like to say it’s seen better days, but it hasn’t. Both Android 3.0 and 3.1 make up a mere 0.6% of Android devices today. It will take more than a couple of tablets on the market to see Honeycomb’s percentage increase, and soon we’ll see just that. With a new Honeycomb tablet announced pretty much everyday, not to mention that it will be going to Google TV later this summer, Honeycomb will do just fine in the long run.（source:intomobile）

Google has recently announced a new sharing/suggestion service akin to Digg votes and Facebook Likes called +1. Yesterday they rolled out the button on the web-based Android Market, so you can promote particular apps to your friends and the world at large. This may smell an awful lot like Buzz, but it’s a little different in that you can see the grand sum of all +1s for any given app, not just ones your friends suggest, and there’s no status or text to go along with it, just a straight upvote.

Combined with the recent addition of featured developers, Google’s doing a lot of good stuff to separate and promote quality applications from the growing mass of Android apps currently available. It doesn’t seem like Android apps are showing up in Google search results like they used to, but it wouldn’t be surprising to see them make a comeback complete with the number of +1 votes rather than (or in addition to) the average five-star rating.  Google is already showing +1 ranks in existing web search results if there are any available,  and providing those sites with added visibility if they were suggested by any of your friends.（source:intomobile）