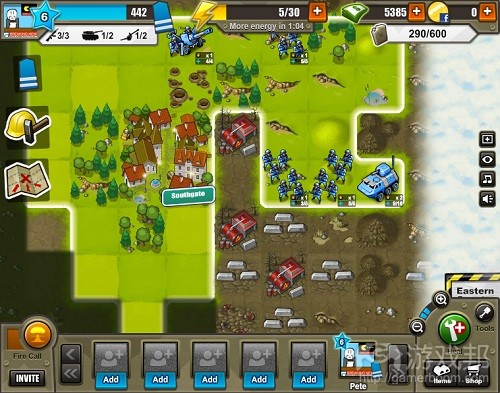 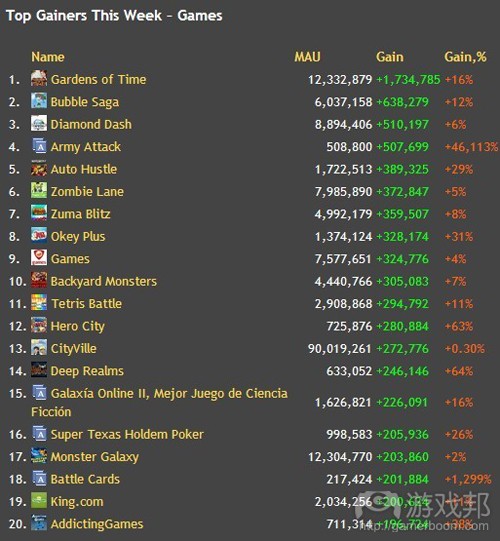 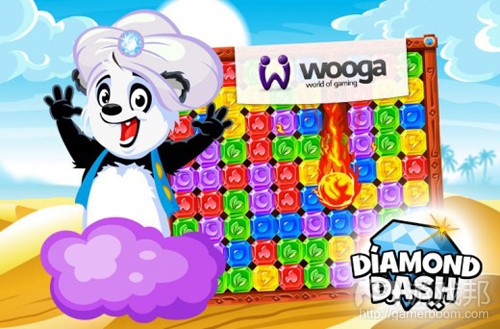 The company “is devoted to developing innovative, quality social games for new and fast-growing platforms, including Facebook, iOS, Android and Windows Mobile”, according to an official announcement, and aims to add a total of 200 new jobs over the next five years.

Tascan was co-founder of Ubisoft Montreal (Assassin’s Creed franchise) and then went on to found the Montreal studio for Electronic Arts, where Gamasutra interviewed him back in 2006.（source:gamasutra）

Gameplay in Army Attack blends real time strategy combat with a bit of the treasure-hunting social game genre. The player’s military units take it in turns to explore the grid-based map,“conquering” unexplored squares as they go, acquiring items, experience, standard currency and energy randomly along the way. Obstacles can be destroyed by the player’s units, with thematically-appropriate items being released from the various structures. For example, the player can earn enemy intelligence to spend on expanding the play area by destroying “propaganda towers.”

Discovered enemy units can be engaged in combat, with defeated vanishing from the map.

The game is monetized exclusively with Facebook Credits as the premium currency players use to purchase in-game items and boosts. Players can also use Facebook Credits to buy the standard form of currency, Cash. Certain mission objectives and building resources can also be bought with Facebook Credits, though this is not always possible, and buildings can either be instantly completed as well. Certain particularly strong or useful buildings and units can only be produced through spending Facebook Credits. Buying new maps for the player to conquer can be done with a combination of Cash and the Intel resource that can be gifted by friends.（source:insidesocialgames）

Digital Chocolate’s newest game, Army Attack, debuts in the top five of this week’s fastest-growing games by monthly active users as tracked by AppData. CityVille is still seeing some growth, though the big Zynga spike seems to have mostly receded.

Beyond that, we’re seeing some strong performance from card games on this week’s list, particularly from the Okey type of game that resembles rummy. Recently, we spoke with Turkish developer Peak Games on the success the genre enjoys in both Turkey and the Middle East/North African region where cultural difference have a huge impact on the monetization rate of social games.（source:insidesocialgames）

Wooga says it has become the fastest-growing social game developer on Facebook. And thanks to that, the company said today it has raised $24 million in a second round of funding.

The funding shows that social gaming is still hot and it’s possible to raise money to compete with the likes of Zynga, as long as you’ve got a fast-growing company. Just last week, Facebook social game maker Kabam raised $85 million, and now it’s Wooga’s turn.

The Berlin-based company has more than 30 million monthly active users on Facebook, with more than 70 percent of those women. Highland Capital Partners led the round and Tenaya Capital, Balderton Capital, and Holtzbrinck Ventures also participated. Fergal Mullen, general partner at Highland, will join Wooga’s board.

Wooga (which spells its name wooga) stands for “world of gaming.” Its popular titles include Monster World, Diamond Dash and Bubble Island. Wooga is headed by Jens Begemann, founder and chief executive. The company has 85 employees and was started two years ago.

“When we started the company, everyone told us the competition was too intense, we would never make it, and now — two years later — we have three games in the top 20,” Begemann said.

On average, millions of users play 20 minutes a day with Wooga’s games.（source:venturebeat）

These leading Facebook games publishers will be using the Appatyze platform to place and manage adverts on other developers’ applications, targeting more users for their games.

As well as acquiring users, these leading advertisers, together with the other Facebook developers who’ve already signed up for the Appatyze Private Beta, will use the platform to generate revenue by allowing ads within their games.

“We are excited to be working with Appatyze and exploring the capabilities of this smart new platform,” said Thorbjörn Warin, Head of Marketing at wooga. “Appatyze has the potential to be very powerful and is already helping us further monetize our games.”

James Rankin, CEO of Appatyze: “We’re delighted to have signed up some of the largest Facebook social games companies to the Appatyze platform within weeks of announcing the Private Beta. That most have chosen to use Appatyze as both a developer and an advertiser means that they will be able to take full advantage of the service: acquiring targeted new users cost effectively as well as monetizing their existing users.

“We’re also pleased to announce as part of our commitment to the developer community that we’ll waive our standard 20% commission and pay out 100% of the ad revenue for the duration of the Private BETA to all developers who register at our website.”（source:benzinga）

Car Games are a great hit socially among young men and women. Whether they are on the race track or smashing cars in demolition derby, Fupa’s games offer hours of free entertainment and exciting action.