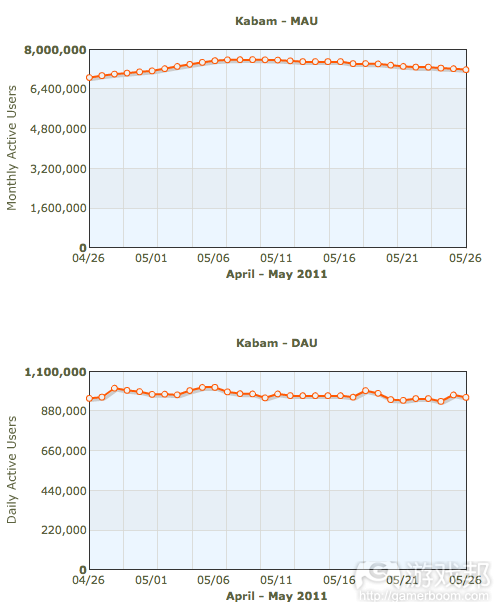 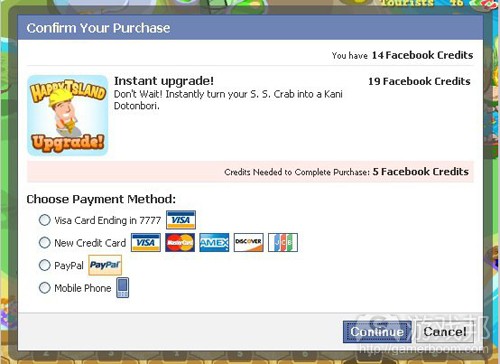 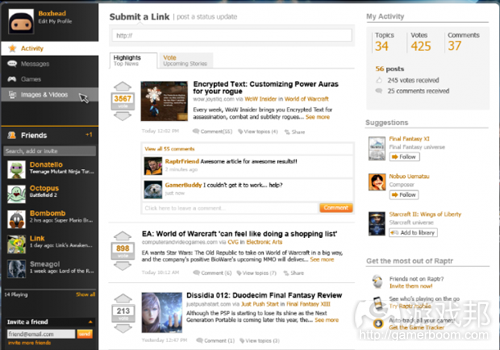 The size of Kabam’s workforce has jumped to 400 from 25 early last year.

Kabam Inc., the maker of Facebook games such as “Kingdoms of Camelot,” is getting $85 million in a financing round led by Google Inc. (GOOG)’s venture arm, helping the startup expand in Asia, hire developers and make acquisitions.

The investment, co-led by Pinnacle Ventures, values Kabam at about $500 million, according to two people with knowledge of the deal who asked not to be named because the valuation is private. The Redwood City, California-based company has raised $125 million since it was founded in 2006.

Kabam lets users play its games for free on Facebook, similar to the approach Zynga Inc. has used to reach a multibillion-dollar valuation. Both companies make money by charging for virtual items — a market that’s expected to more than double to $20.3 billion in 2014, from $9.3 billion last year, according to ThinkEquity LLC. The difference with Kabam: It’s targeting so-called hard-core gamers, who spend hours pursuing complex adventures, often on video-game consoles.

“We’ve created hard-core games that have a very distinctly social flavor,” Kabam Chief Executive Officer Kevin Chou said in an interview. “Compared to buying the latest console game and having to pay upfront at a retail store, they pay only if we deliver them entertainment value.”

The latest investment also includes financing from Performance Equity Management LLC and SK Telecom Ventures, a unit of South Korea’s largest mobile-phone company. Kabam’s earlier investors — Intel Capital, Canaan Partners and Redpoint Ventures — also contributed to the round. Chou, 31, declined to comment on the valuation.
Formerly WatercoolerStarted five years ago as Watercooler, the company changed its name to Kabam in 2010, when it shifted its business from sports and media to social games. The size of its workforce has jumped to 400 from 25 early last year. （source:bloomberg）

Alright, now this is just getting awkward. EA has lost yet another former executive to social games, and not to its own social games division, Playfish. Gerhard Florin, formerly executive VP of international publishing for EA, has joined French social games publisher Kobojo as chairman of its board of directors, Gamasutra reports. In fact, Kobojo, who just raised a sweet $7.5 million in April, made the position just for Florin, who left EA in 2010 due to family concerns. This is the third time this month that a former EA executive has reportedly joined a social games company.

Kobojo enjoys a 3.4 million monthly players, with PyramidVille, its Egyptian-themed mega hit, accounting for 1.5 million of that, according to AppData. A press release says that Florin will largely focus on bringing Kobojo to an international audience, and help localize its titles for other Europeans from its headquarters and a new studio in Spain.（source:games）

This is of particular importance to developers in countries where PayPal is really the only trusted payout option for developers. Payout is the means by which a developer converts in-app currency exchanges to real money that the developer can then deposit into its bank accounts. Facebook says that the PayPal option now doubles the number of countries where developers can begin integrating Facebook Credits to 22 countries total, including Turkey, India and Japan.（source:insidesocialgames）

Last month, Oklahoma Republican Senator Tom Coburn declared, in no uncertain terms, for more senators “with gonads” to help him fight the federal budget crisis. As for his own efforts, he’s released a 73-page report, called “Under the Microscope”, criticizing the National Science Foundation for funding “questionable” projects with US taxpayers’ money.

In a televised report by ABC News, the coverage highlights the $1.5 million robot that takes 25 minutes to fold a towel, research that involved making shrimp run on treadmills, and the nearly $315K used to study whether FarmVille had real effects on human bonding:

Michigan State researchers were provided $314,863 to study “The Role of Social Network Sites in Facilitating Collaborative Processes.”127 According to the funding request, the researchers wanted to use social networks to study how undergraduate students collaborated online and to analyze “aggregate behavioral patterns on Facebook.”128 The study did not examine whether or not spending too much time playing Farmville with strangers on-line had any impact on Facebook users’ relationships with their own family or friends in the real world.

According to one of the researchers, the study found that people were initiating relationships with strangers because having more friends allows you to advance to a higher level in the game. But in other cases, interacting through the game provided the opportunity “to build on relationships that would otherwise have been left stale.”129

But FarmVille isn’t the only example of NSF-funded games research. Page 31 of the report says that $604,755 was spent on understanding MMO “group dynamics” for Sony Online Entertainment’s EverQuest 2. Another games researcher, Professor Bonnie Nardi, received no less than $3 million in NSF grants for studying World of Warcraft, which resulted in a book titled, “My Life as a Night Elf Priest”.（source:games）

5）The Simpsons and SimCity: Rumors say EA’s bringing both to Facebook

Will it have Tomacco? Please tell me it will have Tomacco. EA has revealed that it’s working on a Simpsons Facebook game, set to release this September, MCV reports. Details on the game are scarce, but the site presumes that Playfish is working on it. MCV also found out that the veteran publisher will release a SimCity game as well, which we imagine Playfish is handling too. When EA mentioned that it would ramp up its efforts on Facebook recently, it certainly wasn’t joking

While SimCity will more than likely become a direct competitor to Zynga’s CityVille, the possibilities for what a Simpsons Facebook game would are nearly endless. Our wildest dreams guess is that it will be a social version of the classic arcade game you fed hundreds of quarters into at the local rollerskating rink. Come on, there’s no way we were the only ones.（source:games）

When Raptrrecently announced an additional round of funding for a total of $27 million, I was impressed and puzzled at the same time. On the one hand, $27 million is nothing to sneeze about. On the other hand, to only boast of 8 million users (that’s not active, mind you) with all that funding, is good spin but is actually sad. What is Raptr working on to justify all this funding, aside for the fact that founder Dennis “Thrash” Fong sure could play a mean game of Quake back in the day?

Part of the answer was revealed today. Raptr has re-launched its web site as a social news platform. A mash-up of Digg, Facebook, and Xfire for games, the new Raptr site is very well-designed.

Users can go to Raptr now to share the games they are playing and own, and then to get personalized news and content around these games. Users can submit new, videos, screen shots around each game.

Users can follow games as well as tell Raptr which games they are playing (adding to library). All the while, the Raptr client collects data on games you are playing and matches players together.

The plan is that Raptr will then make game recommendations based on all this player data, thereby competing in the wonderful world of games discovery.

Will it work? Maybe. The site is well-designed, but it’s a lot of information to sift through. In addition, Raptr continues to be very hardcore video game centric. Social games like CityVille are still considered “web games” and there is very little iOS games coverage as far as I can tell.

What’s most interesting to me is where does Raptr take its product next. With its new social game news community web site, its robust client base, and 8 million users, Raptr seems to have the opportunity to create a social network around games.（source:gamezebo）

Tagged may have lost the battle to become the predominate social network of the world back in 2007, but a shift in strategy combined virtual goods sales through its own virtual currency has the platform looking healthy in revenues and registered users. Now Tagged is looking to push growth even farther by formalizing its own internal social games studio led by vice president and general manager of social games, Andrew Pedersen, formerly of EA Pogo.

We knew Tagged was turning to in-house development last year when the platform launched its second game, Farm. By creating an actual in-house studio to manage the development, however, we see just how committed the platform is to the ideal of social games as a moneymaker. Tagged co-founder and CEO Greg Tseng explains the platform’s shift to social games as part of its goal set in introducing new people to one another through dating, interests, and games. The platform’s first game, Pets, launched in 2008 and began monetizing in 2009 when Tagged introduced its platform-specific virtual currency, Gold.

“Interestingly, [Pets] was just an experiment to see if games could make our site more engaging because social games had just started to take off on Facebook,” Tseng says. “And it did make the site more engaging [...]. It’s a game where you can buy and sell other users as your pets. There are about 400,000 daily active users and they make 5 million trades or purchases every single day.”

Tagged judges its success as a platform both through revenue and through new “connections” users make as a result of mingling on the platform. Prior to 2009, Tagged was entirely ad supported; but after introducing virtual currency and a premium subscription service in 2009, ad revenues shrank significantly. Tseng reports that in 2010, Tagged had its third straight profitable year at $32.5 million in revenue. This year, the company is aiming for $50 million and to increase its staff up from 50 to 150 people. Its new games studio will soak up some of the hiring spree.（source:insidesocialgames）