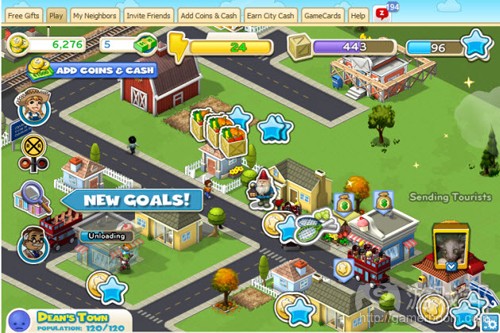 Anatomy of a Blockbuster: CityVille

FarmVille did it. Or maybe it was Café World. There was also Mafia Wars. It could have even started with that game. The untamable lust that exists for a very particular style of semi-RTS social network title is undeniable. Where it began is very difficult to pinpoint, even only these few years after the games themselves began to appear online.

Zynga, the superpower of the social games industry, has wisely flooded the market with a daunting array of ‘Ville’-esque titles, and still the demand for them flourishes unabaited. Run your own resteraunt. Run your own frontier town. Run your own, um, aquarium. If you can imagine it, the chances are there’ll be a social network game where you can run it. With the release of CityVille, Zynga took the next logical step in scaling the equation up from its agricultural begginings.

In terms of gameplay, CityVille sits somewhere inbetween SimCity and a Tamagotchi, though with any threat of death for the wandering inhabitants of your very own metropolis removed to fit in with the game’s simple, block-colour aesthetics. The opening stages of the game are made up of a gentle series of challenges that teach the player how to use the well laid out UI, as well as the basics of civic planning within the CityVille universe.

With this knowledge in-hand, the game opens out into the same socially-focussed machanic that Zynga has become so well-known for. Resources for city-building can be shared between friends, and businesses in other people’s cities can be established and milked for cash.

Citizens pay rent, crops need harvesting, shops need supplies and your ever-expanding burg needs an ever-expanding infrastructure. Somewhat controversially, and as with all of Zynga’s titles, playing the game to its fullest extent requires a microtransaction frenzy on the part of the player every time a new update is released.

Zynga is almost certainly one of the most devisive studios making games today. It is hailed by some as a great equaliser bringing games to those who would otherwise not play them, and by others as a chancer getting lucky on the lowest common denominator, it is a company not without controversy.

What cannot be argued is the outstanding levels of business finesse that the studio has developed, and the inordinate number of loyal fans that it has, all of whom have been entertained by its games. In an industry that has been undergoing a near-constant shift in focus since birth, Zynga has been wise enough to identify a huge and mostly untapped market, fast enough to corner a large part of that market and clever enough to make its products compelling and inclusive enough that anyone can play them.

‘Unique’ is a difficult word to use in relation to a game that draws so much from the successes of gaming history for its charms. There is a level at which the compilation effect that is produced has a brilliant attraction all of its own, however. After the monolithic success of any and every game that featured the word ‘Sim’ in its title from 1989 to 2005, Zynga has filtered the greatest hits of those games into an experience that is available to anyone with a Facebook account and some free time.

The reasons CityVille has done as well as it has are two-fold. Firstly, the attraction of building a personal world is universal, and taps in to a fundamental enjoyment in the notion of total control that is a shared trait in human beings. Secondly, it’s on Facebook.

The monetisation element of Facebook gaming has certainly raised a few heckles in its time, but it has also served as the engine to an online gaming revolution.

While the argument as to the future of games retail continues to rage, Zynga has served as one of the primary companies cultivating an almost entirely new industry born of social networks. This works because the audience makes itself and is as captive as an audience has ever been. When this market is offered experiences intelligently tailored to appeal to as much of it as possible, it won’t turn its nose up.

When these experiences contain an almost limitless potential for replay value, both studio and audience hit upon an everlasting well of supply and demand that neither party will ever wish to see abandonned. The more Zynga puts in, the more it can draw out.

The Facebook games phenomenon is far from over. Indeed, it may well represent the shape of things to come. Considering that, there is no way that someone seeking to grab their own slice of cake can do so without putting in a good deal of hard work.

The ‘Ville’ franchise, while endearing on a visual level and ingeneous on a gameplay one, is a very slick and well calculated product. Zynga has offered just enough of a game that anyone can get involved and enjoy an impressive amount of gameplay variation and interaction with other players.

Once a player has become committed, a wealth of monetised options are also available that, while arguably not expanding gameplay a great deal, are clearly very attractive to committed fans. This formula has proved a goldmine for Zynga because the company has dedicated so much of its time to understanding the wants of a broad gaming audience, and catering to those wants entirely. (Source: Develop)