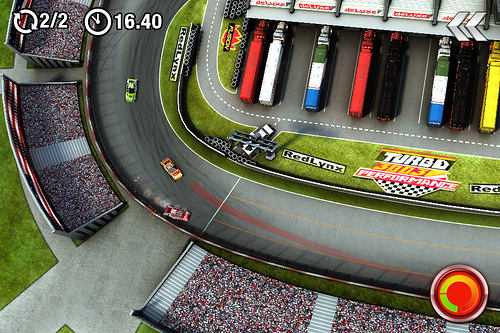 Demonstrating the potential power of publishers, and the reason EA bought Chillingo, highly regarded Finnish developer RedLynx has signed up with the UK publisher for its new game.

DrawRace 2: Racing Evolved, the sequel to the critically acclaimed but commercially underperforming DrawRace (despite its million downloads – mainly free) will be released by Chillingo on iPhone and iPad, due in May/June.

The new game in the finger drawing race series will expand on features with new cars, car types, tracks, turbo controls, and a career mode.

“We’re proud to partner with RedLynx to bring this exciting next generation title to the Apple App Store,” explains Chris Byatte, co-general manager of Chillingo.

“DrawRace 2: Racing Evolved delivers an unparalleled racing experience to the iOS platform with its amazing new features that bring out the natural competitiveness in players as they speed their way to the finish line.”

RedLynx has successfully published its Monster Trucks Nitro franchise – co-owned with Miniclip – on the Apple App Store, but despite excellent reviews DrawRace didn’t catch the imagination of US iOS gamers, something RedLynx hopes to improve thanks to Chillingo’s marketing and promotion muscle.（source:pocketgamer）

Having charged to the front of the pack last quarter, Canalys reports Android managed to stretch its lead over its rivals in Q1 2011.

Based on the company’s latest figures, Google’s platform now holds a 35 percent share of the global smartphone market, having shipped a total of 35.7 million Android handsets across the quarter.

Google’s growth has, in turn, impacted on the market as a whole, with total smartphone shipments across platforms up by 83 percent, hitting 101 million units.

However, while Google will receive most of the plaudits for Android’s acceleration, Canalys claims much of the leg work is actually being done by OEMs.

“Samsung’s own operating system development, combined with the branding and investment in its Wave smart phones at mid-tier prices, has led to good uptake in developed markets, such as France, the UK and Germany.”

Microsoft will be hoping that Nokia – which remains the world’s largest smartphone manufacturer according to Canalys – can give Windows Phone 7 the kind of boost it will need to surpass the likes of bada in 2012.

In its current guise, the Finnish firm remained ahead of Apple, RIM, Samsung and HTC (in that order) in Q1 2011, shipping 24.2 million units to retail – up 13 percent year-on-year.（source:pocketgamer）

3）According to a new report from research firm IDC, the worldwide shipment of smartphones has increased almost 80 percent when comparing the first quarter of 2011 with the same quarter in 2010.

Vendors have shipped a total of almost 100 million units in Q1 of this year, nearly double from 55 million units in the same quarter last year. And, now Apple sits in second place just behind Nokia on the list of top five smartphone vendors in the world.

Following after Nokia and Apple are RIM, Samsung, and HTC. The percentage growth among the top five smartphone vendors varies greatly. The market shares of both Nokia and RIM have dropped since the previous year, from 39 percent to 24 percent and from 19 percent to 14 percent, respectively. （source:slashgear）

4）Rovio up for three gongs at the 2011 Develop Awards

This year there are 95 firms in total in the running from nine different countries, with 28 different games represented.

Rovio must be among the favourites, given its astonishing 12 months. It’s up for ‘best use of a licence or IP’, ‘best indie studio’ and ‘best handheld studio’.

Other mobile representatives in the running for an award include Ideaworks, Mobile Pie and Natural Motion.（source:mobile-ent）

More impressive however is the division’s $70 million of revenue booked during Q4, the first three months of 2011.

This is up 27 percent year-on-year, or 19 percent compared to the previous sequential Christmas period.

Indeed, six months ago, EA Mobile’s revenues declined for the first time, suggesting it was struggling to deal with the transition from Java and Brew to smartphones.

What’s also notable about EA Mobile’s Q4 revenue is that it would have been the first complete period including sales from Chillingo, which was bought in late October.

EA Mobile also released big iOS titles such as Dead Space during the period, as well as holding many of its now regular 99c Apple App Store sales.

It pointed out it had 15 of the top 25 paid games on the iPhone Easter Weekend, while revenue from iOS devices in Q4 increased by more than 100 percent year-on-year.（source:pocketgamer）

The competition, launched in tandem with ME and GetJar, will offer $15,000 in total prizes plus a distribution deal for the winner.

It’s all designed to build the base of games created using the MoMinis Studio. This is a free development engine pitched at developers in the Flash, PC and mobile spaces.

And the solution also has a distribution component, with a network of partners such NTT DoCoMo Verizon, Telefonica, Orange, Turkcell and Vodafone.

The contest will consist of a rough draft and a final draft submission stage.

Entrants should explain the concept of their game or show it in action in a video and submit it by June 20th.

All final drafts must be submitted in .mom files (MoMinis original game files) by July 10th.

Prizes are as follows:

•  One first place prize winner will receive $10,000 USD and a promotional deal with GetJar