1)According to Qianjiang Evening News, the popular game—Fruit Slice in Android Market was developed by a graduate team—DroidHen from China Zhejiang University. Although there are so many clone versions and developers in this market, DroidHen’s Fruit Slice has stood out finally.

In the Top20 of Android Market’s ranking list, there are 5 games were developed by DroidHen, including Fruit Slice which ranked forth in this ranking list.

By now, the total downloads of DroidHen’s games have exceeded 40 million times and its another game—Shooting also has got more than 7 million downloads.

There are two views spreading in mobile game market, one is that 90% developers cannot make profits; the other is that anyone in this market can make great fortunes quickly. (xinhuanet.com)

2)According to CNR, mobile game is a kind of industry which has first got its own mature business model in Mobile Internet.

Now in China, the development of Mobile Internet is very quickly with more than 142 million mobile gamers in the first quarter of 2011,grew by 5.09% quarter-over-quarter. So, as predicted, the future development of whole mobile game industry will be first reflected in the competition of talents. (www.ce.cn)

3)According to yesky.com’s interview for Popcap APAC president James Gwertzman, James said that the best way for a entrepreneurial team to get success in the market was to achieve creativity. This kind of creativity can be referred to any details in games, can attach games with large attentions and therefore help games to stand out from plentiful games.

Learning from Rovio’s promotion for Angry Birds by selling peripheral goods, many developers have recognized the large potential of peripheral market. Popcap has absorbed some related employees from Disney to explore this market. (hexun.com)

4)According to tech.qq.com, in Global Mobile Internet Conference, Tencent Mobile Game GM Guo Yong said that Tencent’s mobile game will implement the sustainable opening-up strategy and launch a 3D assistant plan for developers. Under this plan , Tencent will launch some mobile game competition, award talent developers by ￥1 million in total, launch a supporting program with ￥10 million funds to promote the smartphone market, establish an investment fund with several billions and cultivate those excellent developers in this industry. (tech.qq.com) 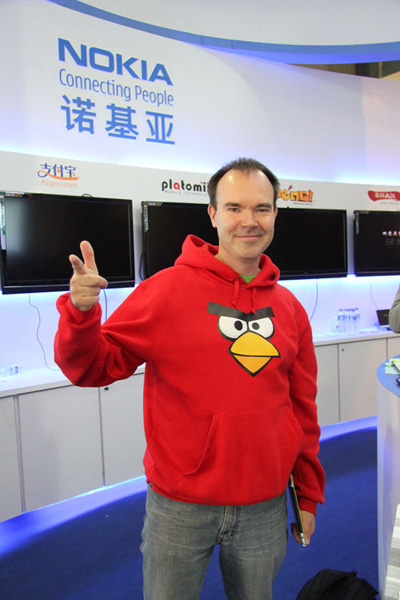 5)According to NetEase Technology, Rovio’s Peter Vesterbacka said that Angry Birds had achieved $20 million revenues from paid downloads and advertisings in the first quarter of 2011. There are 140 million download users and more than 50 million paid users in Angry Birds. Especially, there are nearly 10 million downloads which were generated by China users.

Peter Vesterbacka predicted that Rovio would get more than $100 million revenues in 2011.

With 82 employees now, Rovio is planning to go public after 3 years. (NetEase Technology)

Referring to Analysys International’s view, the user cardinal number of China mobile has reached a large scale, so the growth rate of users will gradually slow down. In addition, because of the serious homogenization of China mobile games, more and more users are tired to face those homologous games. (hsw.cn)