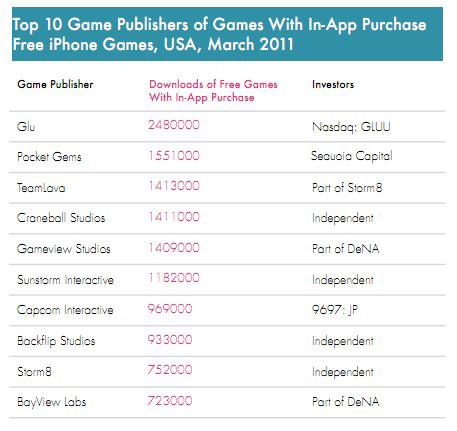 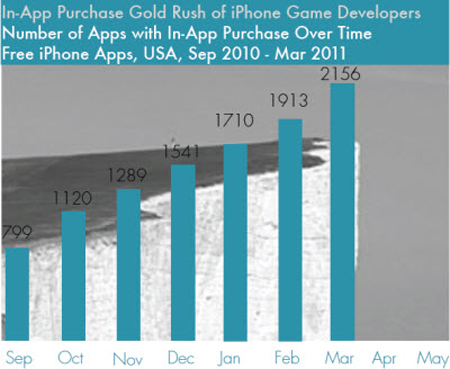 2156 of them were free games with in-app purchases

Free-to-play games have become huge on Apple’s App Store in the past 19 months. Almost 40 percent of game downloads are now free titles with in-app purchases, according to a study by Xyologic, a startup that indexes and searches through App Store data.

In March, there were more than 99.9 million downloads of free iPhone games from the App Store. About 80.8 percent of all app downloads in the month of March were free. In many of these games and apps, the free-to-play model is used, where a user can pay real money through the in-app purchase feature for virtual goods such as better weapons in a game.

The scary part is that Apple has made a lot of the developers of these apps and games nervous because of its shift in stance on a particular kind of model, known as pay-per-install. In games that use this model, an app will offer an incentive for the user to install another app as a kind of cross promotion. But a couple of weeks ago, Apple cracked down on the pay-per-install model because it can be used to artificially inflate a game’s ranking in the top 25 apps in the store. That has affected pay-per-install marketing firms such as Tapjoy.

“It may make Apple’s platform possibly less attractive vis-a-vis Google Android if developers can’t find a suitable alternative to offer walls,” the report said. “This is the biggest interference by Apple into the app economy in recent months. Its effects, at this point, are unclear.”

Apple has to be careful about how it resolves the pay-per-install problem if it wants to hang on to its developers. The top developers affected by Apple’s decision likely include Glu Mobile, which saw 2.48 million downloads of free games with in-app purchases in March. The second-ranked company was Pocket Gems, with 1.55 million downloads. That was followed by TeamLava (part of Storm8) with

Of the 150 top free games on the App Store, 94 games, or 63 percent, are games with in-app purchases. These are some of the observations based on the data that Xyologic dug out through its search service. Berlin-based Xyologic indexes 610,000 apps in the App Store, the Android Market, and the Windows Phone 7 Marketplace on a monthly basis. It can rank the number of downloads for each app and publisher in the month, according to Xyologic’s Matthaus Krzykowski (an occasional VentureBeat contributor).（source:venturebeat）