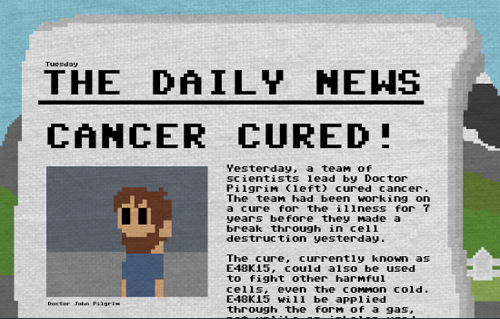 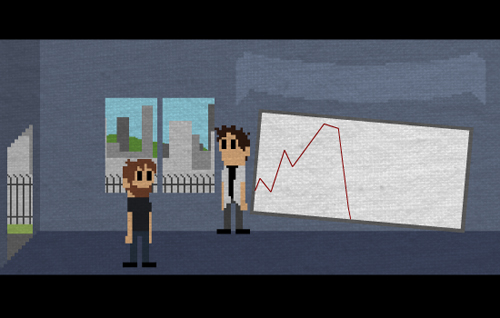 What Would You Do if You Had Six Days to Live?

What would you do if you had six days to live? That’s the intriguing premise behind the indie flash game One Chance. The quiet, classic adventure presentation tells a melancholy story of science gone wrong. What was thought to be a cure for cancer becomes a super-virus that threatens all life on Earth, and it will destroy humanity in less than a week.

This game has a wrinkle, though. There are no second chances, no reloading from checkpoints. As the name implies, you have one chance. A cookie stored on your computer assures that your first play through of One Chance is your only one. There are ways around it, of course, but taking that route undermines the game’s poignancy. “Choices within games often feel a little arbitrary,” says One Chance creator Dean Moynihan. “There’s absolutely no weight in a choice that you can immediately change upon loading an old save. The plan was to get players to think about a choice and its consequences a little deeper than in any other game.”

Those choices color the game experience. You take the role of John, once hailed as a genius for creating a miracle cure, then quickly vilified as the man who will ultimately wipe out humanity. The game only takes 10-20 minutes, but in that time you make hard choices about how one faces the inevitable. Do you keep working in your lab for a cure? Spend the time you have left with your daughter? Cheat on your wife?

“The single playthrough idea definitely came first; it was writing the story around that which was the harder part,” says Moynihan. “I wanted the choices in the game to not be so black and white. This meant creating choices that would often involve dealing with ‘the greater good.’ Would John spend the last few days on earth with his family or spend it trying to save the world?”

The story can lead to some dark places. One possible story beat is particularly ironic if you choose to have an affair — Moynihan says his favorite ending is also the worst, in which John loses both his family and the world. “It completely epitomizes the choices the player has made to get to that point.”

Being a video game, fans were eager to find the “good” ending. Moynihan says he received a lot of messages asking how to find the cure, but that possibility isn’t a perfect ending. Some happier possibilities were even cut. “My favorite deleted scene was a Back to the Future Easter egg, in which John, on the last day, could travel back in time to the first day and relive the week again, making different choices.”

The simplistic graphics were both a conscious choice and a matter of necessity. “I look back lovingly at the SNES and Mega Drive era of gaming,” he says. “It was definitely nostalgia that influenced the game. Also, I can’t draw. At all.”

This isn’t the first time Moynihan has explored similar themes and tone. He says one of his previous games, Tree of Knowledge, “was fundamentally a game about choices.” It was much more simplistic, letting the player eat from the Biblical knowledge tree of good and evil. It didn’t discourage multiple playthroughs; in fact, the best way to understand the game’s message is to see both possibilities.

“I think it was from making that game, with such a simple choice, that made me keep thinking about decisions in games.” Now his modest success has turned into a full-fledged internet meme. His other games have barely cracked 5,000 views combined; One Chance, by comparison, has hit over two million. “It’s a little overwhelming,” says Moynihan. (Source: 1up)