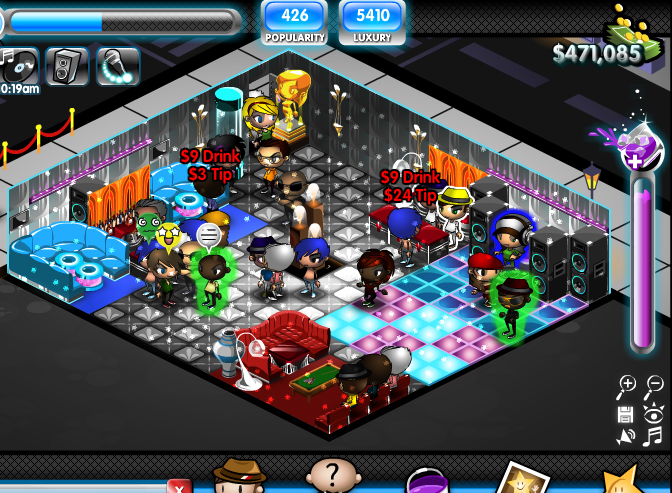 Social gaming on Facebook is a growing trend that is slowly starting to see more opportunities for the music industry. The most recent development is the official launch of Nightclub City, a game that lets users oversee virtual live music settings.

The game soft-launched in April, meaning it just appeared on Facebook with no marketing and no details about what company was behind it. It’s since gained 4.5 million active users and was ranked by Inside Social Games as the No. 1 Best Facebook Game of 2010.

Today, game development firm Booyah announced it’s behind the game, and is starting the official push for more users and more content. Similar to other popular Facebook games, like Farmville, Nightclub City lets users create and customize a virtual environment – in this case, nightclubs. Players control the look/feel of the dancefloor, the bar, and even pick the tracks played. They can even update and access info from an iPhone app as well.

In Booyah’s Nightclub City, players are placed in charge of a modest bar, armed with a wide selection of real-life music tracks and the dream of being the most popular hotspot in town. Players listen to killer music sets powered by real-life artists, ranging from rock to hip hop to electro mixes, as they run their personal club. Each user can also customize the look of their nightclub with decorative items with the ability to hire real-life Facebook friends as bartenders and bouncers as they spin the night away with the latest songs from new artists and bands across the world.

Participating artists license their music to the game, which for now consist primarily of emerging artists, such as “the hip-hop violinist” Miri Ben-Ari. But Booyah wants a lot more music available in the game, and is positioning itself as a music promotional platform to do so. For instance, it says participating artists have seen a 1,000% increase in the number of “like” links on Facebook as a result of their inclusion in the game.

Other music moves in social gaming this week include the developers of Platinum Life extending the hip-hop mogul game to MySpace.

From the release: Platinum Life sets players on a meteoric rise through the hip-hop industry. From the mean streets to penthouse suites, players will complete missions, rock performances and battle other players as an aspiring rapper, DJ or singer to progress through the game.

Platinum Life features some of the top talent in hip-hop, including Ludacris, Omarion, Trina, Shontelle, DJ Skee and more, who players can choose as their Music Icon to guide them through their rise to the top of the industry. As fans return to Platinum Life to continue their progress, they’ll unlock dozens of Achievements that they can brag about to their friends through their online profile.

Coinciding with the MySpace expansion is a Battle of the Sexes contest that pits male users versus female users to see which collectively can earn the most virtual cash. Winners are entered for a chance to see Ludacris in concert. Additionally, Def Jam Recordings is also taking over the game for a period of time, offering in-game virtual items from acts on its roster like the Roots, Big Boi and Rick Ross.