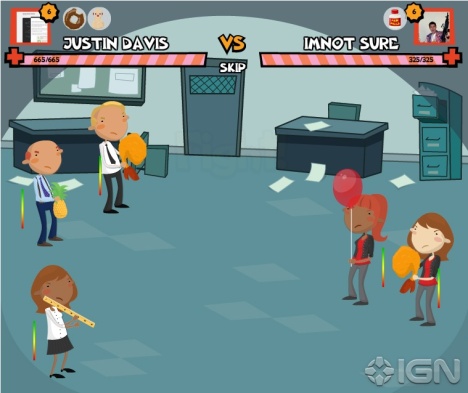 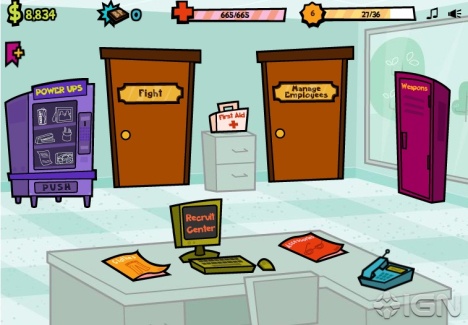 Office Wars from Broken Bulb Studios is the latest in a long line of violent, combat-oriented workplace games. While some might look down on virtual office combat, we view it as a humorous (and much more legal!) way to work out some of that cubicle aggression.

In Office Wars players hire a small army of office drones and arm them with weapons ranging from coffee mugs to computer towers. Players then pit their employees against the office armies their friends have raised.

In Office Wars players don’t actually control the combat themselves – so there is no need for lightning quick reflexes. Once a fight has begun, the outcome is predetermined. The trick is to equip your employees with the proper items, and boost their stats in the right way, to give your office the edge.

The game’s menu is, appropriately, the office itself. The first step is to hire an employee, using the computer. Employees come in all shapes, sizes, and sexes, and even have different personality types. They all start off more or less the same for gameplay purposes, though. 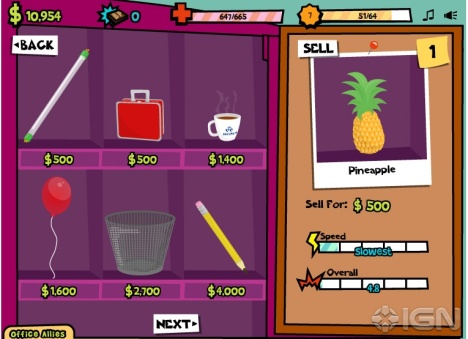 Once you have an employee or two, they must next be armed. Weapons and armor are purchased from the locker, and start off as office basics. Players will fight with lunch boxes, waste baskets… even balloons. Like any good fight, things escalate quickly. High-level weapons include a staple gun and a power drill.

The real “meat and potatoes” of the game is combining the right employee weapons and clothing with the right employee stats. After achieving milestones, players will earn a small number of Brownie Points that can be spent to improve an employee’s health, strength, agility, or several other key stats. Players will have to decide if they want a quick and weak employee, a slow and strong one, etc.

A big part of Office Wars’ entertainment value comes from its humor and pop culture references. In one mini-game players are tasked with smashing up a printer with a baseball bat – a scene that should be familiar to all Office Space fans. Plenty more references are made to that film, the office, and pop culture in general. Even the Companion Cube from Portal makes an appearance.

Broken Bulb seems to have a clear path for where they plan to take Office Wars. Although the game doesn’t feel incomplete currently, various features are listed as “coming soon.” In the future, players will be able to equip their employees with accessories and new hairstyles, and engage in boss fights.

Whether or not someone will enjoy Office Wars probably depends on two factors: How much of their life they have spent sitting in a cubicle, and how much direct control they feel they need over videogame battles. Players that are content to let their employees duke it out automatically will find a lot to like in Office Wars.