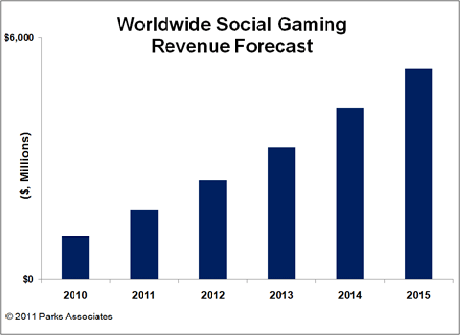 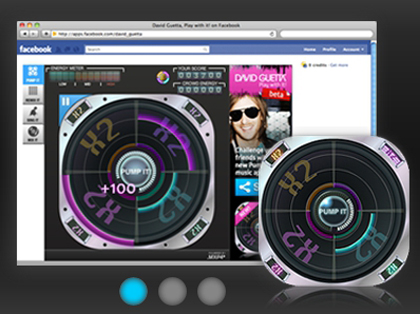 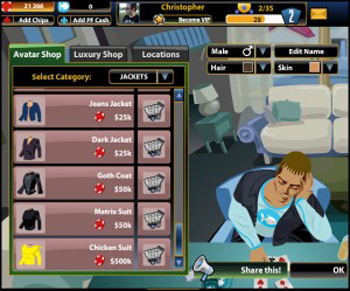 1）OK guys, we get it, social games are going to make lots of money in the next five years. I’m sorry, did you say $5 billion by 2015? Alright, now you’ve got me. Market research company Parks Associates predicts that by 2015, social games will be worth a sweet $5 billion thanks to in-game advertising and virtual goods sales. Their forecast is based off the fact the social games already raked in $1 billion in 2010 alone.

“Gaming on social networks has quickly become the most visible category of online games,” research analyst at Parks Associates Pietro Macchiarella said. “Right now more than 250 million people play games like Zynga’s CityVille and FarmVille on Facebook every month, and both game developers and marketers have taken notice. Big brands such as McDonald’s and 7-Eleven have carried out cross-promotions with existing social games.”

And by social games, they generally mean Zynga, who has ran promotions with not only McDonald’s and 7-Eleven, but even adult-oriented companies like Farmers Insurance. “The abilities to measure the efficacy of different gameplay mechanisms, to tweak game design in near-real time, and to test new models are advantages that traditional gaming companies will never have,” Macchiarella said. “Zynga’s huge market share is the best proof of the competitive advantage made possible by properly leveraging consumer data.” （source：games ）

2）Has Guitar Hero found a new home on Facebook? According to data presented by MXP4, a social game developer based in Paris, it very well could be in the future. Of course, keep in mind that the survey was conducted by folks who have a vested interest in music games on Facebook. MXP4 found that one in nine Facebook users play music games, but more importantly that one in three Facebookers play social games. This is the exact demographic that MPX4 hit with its Pump It series in 2010, and has enjoyed mild success.

Here’s what else MXP4 found in its survey:

* 49 percent said the they would play games on Facebook for the chance to win exclusive tickets, merchandise or opportunities to meet their favorite artists;

* 12 percent would pay extra to have access to their favorite artist’s latest tarcks on interactive music games.

While it’s important to know that most people would want a multiplayer experience on Facebook, it’s far more vital to see the possibilities for future Facebook music games. （source：games ）

3）Late last month, Playfish announced on its forums that due to poor performance in Pirates Ahoy, Poker Rivals and Gangster City, the developer would be taking the titles offline on Tuesday, June 7, 2011. A study of these three games’ life cycles characterizes the challenges of killing off a social game built into a larger developer ecosystem.

Note: Lifetime data was collected from our application and social game traffic tracking service, AppData. To view these numbers for yourself or any traffic information beyond the current 30-day period, sign up for AppData Pro.

Pirates Ahoy is a combination treasure hunting and city building game where players take the roll of a pirate plundering the high seas for goods that can then be spent on building up a pirate cove. The game took about three months to hit its stride with users, reaching an all-time high of 6.8 million MAU and 806,000 DAU between August and September 2010. After that point, the game declined more rapidly than Poker Rivals or Gangster City, but stayed relatively sticky among its small audience with a 15% to 20% ratio of DAU over MAU after its peak months ended.

Poker Rivals was Playfish’s answer to Zynga’s Texas HoldEm Poker, only with avatar customization as a variation to the formula. The game hit its stride very early with all-time highs of 1.5 million MAU and 130,000 DAU in December and January and then declined gradually with post-peak DAU to MAU ratio hovering around 13%. Interestingly, Poker Rivals seemed to attract a female audience why Texas HoldEm Poker’s audience remains largely male.

Gangster City also seems to be Playfish’s answer to Zynga game Mafia Wars, but the quality of animation, voice over work, and polish created a completely different player experience. By the numbers, Gangster City hit its high of 2.6 million MAU and 322,000 DAU in the first three months and declined a little bit faster than Poker Rivals over the rest of its life. The post-peak DAU to MAU ratio hovers between 8% and 10%.（source：inside social games ）

4）Film studios have been testing ways to best fit into the nexus between real-world marketing and promotion via social gaming. The key, of course, is for the film’s storyline to mesh with the theme of the social game. Universal Pictures film, Fast Five, has found that perfect fit with the Facebook-based social game Car Town. The film stars Vin Diesel, fast cars and road races set amid beautiful Brazilian scenery.

What makes this promotion unique is that Universal has taken advantage of many of the features Cie Games, the social networking publisher and creator of Car Town, offers. For example, players will be surprised to encounter an in-game incentive of virtual gifts to purchase tickets while they play the game.

The promotion will roll out in phases and include a significant number of clips from the film integrated into the game. For example, special missions tie-in with Fast Five’s storyline and the franchise’s fastest, most recognizable cars. Players will also encounter in-game micro transactions, the ticket purchasing promotion. Tightly integrated into the online play is an offline home entertainment retail component.

The promotion begins today in advance of the April 29 opening of the film with players able to view the movie trailer at the in-game drive-in theater environment and race in a virtual Rio de Janeiro, the city in which the latest chapter in the franchise takes place.

The growth of social gaming was one of the notable trends in online marketing last year. A study from eMarketer concludes that 53 million U.S. Web users, or 24% of the online audience, played at least one social game a month in 2010. And the marketing research firm expects that number to grow to 61.9 million players this year (27% of U.S. Web users) and 68.7 million (29%) in 2012. （source：promomagazine ）

5）No, thank you, March Madness. NBA Legend, which NBA Digital claims is “the first original professional sports league game for Facebook,” has quickly surpassed 1 million monthly players, according to AppData. Released by Lionside in February, the game allows players to become an NBA athlete and run a team at the same time.

Confusing, we know, but over 1 million NBA fans were willing to suspend their disbelief of being two people at once, so why can’t you? The game features all 30 NBA teams and current rosters thanks to a licensing agreement between Lionside and NBA Digital.

“To reach this significant milestone so quickly after launch is a testament to the power of the social media audience we have built on Facebook,” said Bryan Perez, NBA Digital GM and SVP. “NBA Legend takes sports gaming in a whole new direction, beyond Fantasy, into something that is scalable and can be enjoyed year round by fans of all interest levels.”（source:games）