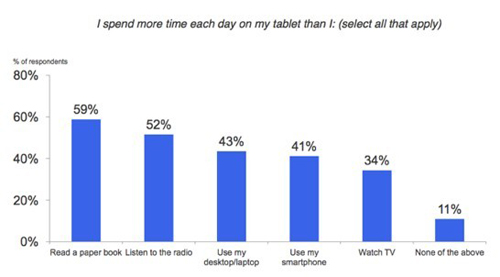 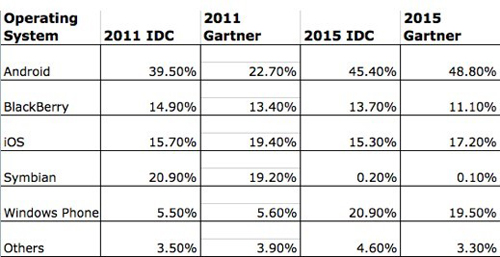 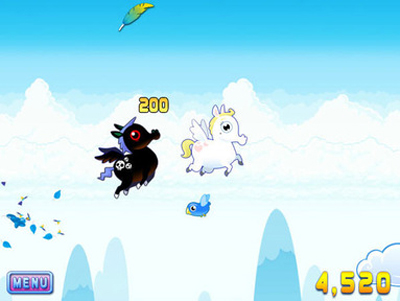 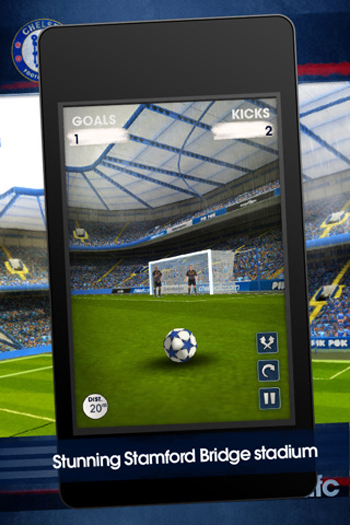 Microsoft’s history (1977), co-founder Bill Gates said that his goal was to have a computer on every desk. Flash forward to today and Google’s goal appears to be to have Google advertisements on every display of every kind. Apple’s iPad reinvigorated the tablet computer market (started, ironically, by Microsoft). So, Google wants to how consumers (note Google does not talk about just “people”) use tablets. Here’s what they found:

Tablets are changing the way consumers engage with content

- 82% said they use their tablet primarly at home

A large percentage of the 1400 tablet users surveyed reported that they used their tablet more than their PC, smartphone, or TV.（source:socialtimes）

2.Gartner & IDC Agree About Mobile Marketshare in 2015 but Disagree About 2011

In March, I took a look at IDC;s mobile platform forecast for 2015 and was fascinated by their prediction that Windows Phone would be the second largest in marketshare.

Now, All Things Digital reports on Gartner’s 2015 mobile platform forecast which also has Windows Phone as having the second largest marketshare.

I placed IDC’s and Gartner’s 2011 and 2015 forecasts side-by-side in the table above so we could see how much they agree (or not). Curiously, IDC and Gartner agree more about what 2015

will look like than 2011. Their 2015 forecasts are within a percentage point or two. However, their forecast for this year (2011) differ significantly for Android and iOS (iPhone/iPad).

Leading Japanese carrier NTT DoCoMo has claimed it is one of the first operators to roll out Google’s Carrier Billing service for Android.

The operator states that users have been able to buy apps from Android Market via their phone bill since the end of March.

The payment architecture was employed by German VAS provider net mobile AG, with the system designed to integrate other carriers in the future with ease.

“The risks generally associated with payment transactions such as the disclosure of private credit card information are a thing of the past. Therefore, the net mobile AG plans to further expand its global business with mobile payment solutions.”

The firm believes Android will gain significant momentum once all major European carriers are on board, though its own role in expanding the platform’s share in Japan could be just as crucial.

US market leader AT&T rolled out carrier billing on Android back in December.（source:pocketgamer）

PopCap Games unveiled an experimental label for risky games this week, called 4th & Battery. But the label’s first title, Unpleasant Horse, turned out to be too unpleasant for Apple. Apple rejected the game because of its mature content.

The rejection is surprising because PopCap isn’t just any indie game company. Its games have been downloaded more than 1.5 billion times and the 4th & Battery label was an attempt to allow its game artists to express themselves and stretch their (horse) wings. The rejection is likely to set up a discussion about what kinds of games are artistic versus just plain tasteless, and if Apple should be the judge of that.

“WTF? Apple rejected Unpleasant Horse cuz of ‘mature content?’ We thought horses dying in meat grinders was wholesome family entertainment!,” read a tweet from 4th & Battery.The label said it was appealing the decision and also proclaimed that it loved Apple and even owned an old Newton (the failed original tablet handheld). PopCap has declined formal comment and has deleted some of its tweets as well. It’s quite possible that Apple will just take longer to approve the game or that there may be something technically wrong with it. Apple and PopCap have not offered any comment this morning.

Others have pointed out that the App Store has a lot of tasteless or mature-rated games, from Call of Duty: Zombies to 5 Minutes to Kill (Yourself). 4th & Battery’s Unpleasant Horse features a flying black horse with red eyes that attacks other innocent-looking flying horses and sends them to their deaths to meat grinders on the earth. It’s a simple animated game, and it reflects the same kind of zany imagination featured in PopCap’s monster hit Plants vs Zombies. But it’s definitely not the sort of family-friendly title that PopCap usually makes, such as Bejeweled.

Ultimately, 4th & Battery will likely find other platforms that are more than willing to take Unpleasant Horse. That would likely be a loss for Apple, which needs the continuing good will of indie game developers to make its platform stand out from the rest.（source:venturebeat）

Demonstrating that whatever anyone says, it is committed to games, Apple UK has been dipping into the UK games PR talent pool again.

Following the leak that Nintendo UK’s head of PR and communications Rob Saunders would be joining the company (still to be officially confirmed), has come news about Activision’s European PR director Nick Grange, who is unofficially known to be joining Apple to handle its iPad account.

Previous to his role at the Call of Duty publisher, Grange had worked at EA and Microsoft, where he dealt with the original Xbox launch.

As with Saunders, Grange’s move hasn’t been formally confirmed yet, but UK trade website MCV broke the story following its annual awards ceremony, which brought together the UK games industry and industrial amounts of alcohol. Presumably loose lips followed.（source:pocketgamer）

Japan has had smart phones for more than a decade, but one of its quirks is that smartphones – those running operating systems like iOS, Android, BlackBerry and Symbian – have been relatively slower to take off.

Well, last week was pretty significant in that regard. According to GFK Japan – as reported on MobileCrunch – between 28 March and 3 April, 50.1% of all mobiles sold in Japan were smartphones.

The market research firm says that Android is what’s driving smartphone growth in Japan, although it does not split out the numbers for the various operating systems – or even say how many overall devices are being sold.

It’s a big moment, especially for some of the content companies who’ve made their fortunes from feature phone services in Japan, but are now also launching on smartphones. Social mobile gaming company DeNA is a good example – its MoBaGe community is making the leap this year.（source:mobile-ent）

Flick Kick Chelsea was released on the App Store yesterday with a £1.19 price point, and adds a virtual version of the club’s Stamford Bridge stadium to act as the backdrop.

Other new featured include a trivia quiz with questions about Chelsea, and an in-game messaging feature to receive the club’s latest news as and when it is announced.

Otherwise, the game is unchanged, with modes including Skillshot, Arcade, Bullseye and Time Attack, and the option to challenge other people in an online multiplayer mode.

For PikPok, the Chelsea partnership is an impressive deal, which could lead to other reskins with rival football clubs around the world. However, it may face competition from developers like Neon Play, which has its own Flick Football franchise on iPhone.（source:mobile-ent）

That’s a big chunk of a $1.1 trillion mobile market

Research commissioned by Motricity and run by Informa confirmed the growing inportance of data to the world’s operators, but found that data services are changing.

When asked which data services were most important to their revenues currently, carriers cited messaging (35 per cent), ahead of mobile internet (17 per cent) and music (14 per cent).

But in two years the emphasis will change to mobile internet (29) and social networking (28) overtaking messaging (26) as the key driver for revenue growth.

Unsurprisingly Motricity suggests that carriers are now interested in moving to a managed service model for data offerings to reduce costs and speed the adoption of new services.

It said: “With the core competence of carriers not necessarily the development, delivery and management of services and applications, outsourcing such services can also give the operator more time to implement more directly customer-facing activities.”（source:mobile-ent）