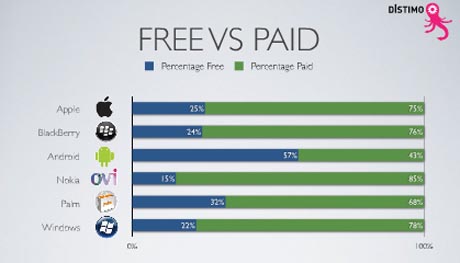 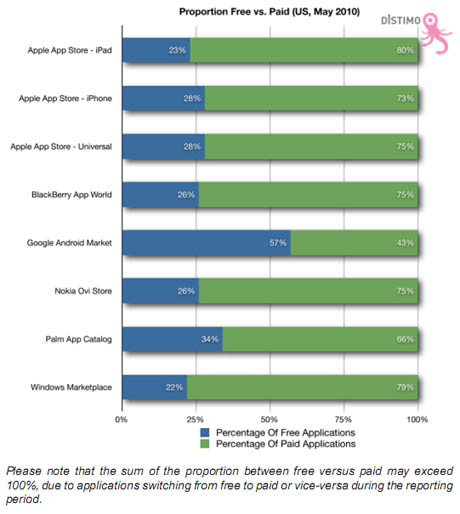 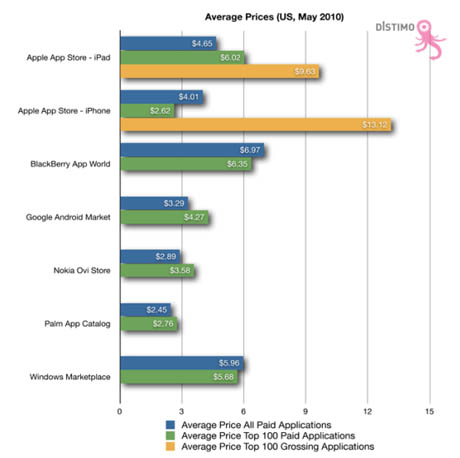 Anyone who has kept an eye on Distimo’s monthly reports on the mobile market will know Android Market is the marketplace most characterised by free apps, but it now appears that the free model is enjoying growth elsewhere too.

The latest numbers – taken from Distimo’s report for June – suggest 57 percent of all apps on Android Market in the US are free, with the remaining 43 percent made up by paid apps.

That’s the same split seen the last time Distimo published such figures, back in February.

Indeed, all formats except Windows Phone have seen their split shift in favour of free apps – although Android remains the only OS where they outnumber their paid apps.

As previously, BlackBerry App World has the most expensive apps in general, with the average price of all paid apps coming in at $6.97 based on Distimo’s figures.

Apple’s iPad isn’t too far behind, however, posting an average figure of $6.02 – a price that puts it ahead of Windows Phone on $5.96, which used to be the second most expensive marketplace.

It’s then a fairly close race between the other major formats, with the average price of iPhone apps just topping $4, Android apps coming in at $3.29, and titles on Nokia’s Ovi Store averaging $2.89.

Distimo’s numbers proclaim Palm’s App Catalog the cheapest marketplace on average, with its figure hitting $2.45, presumably due to the 50 percent sale that’s been occurring.

Conversely, the firm also observes that the average price of the top 100 grossing apps is higher on iPhone than iPad.

Distimo concludes that iPhone’s top heavy figure is significantly influenced by a number of lifestyle, business and medical apps with three figure price tags that launched on iPhone only.