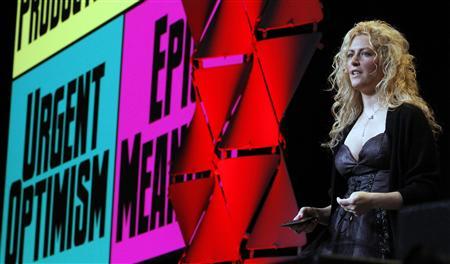 Author McGonigal on a mission to make games matter

Best-selling author Jane McGonigal is on a mission, spreading a message that playing games, whether electronic or physical, is not a waste of time but can improve lives and solve real world problems.

She has been viewed as a kind of ambassador of the $60.4 billion global video game industry since she spoke at the influential TED Talk conference in 2010. Her book, “Reality is Broken: Why Games Make Us Better and How They Can Change the World” hit stores in January and by February made the New York Times bestseller list. And now, she is a regular guest at seminars and on TV talk shows, such as “The Colbert Report.” “We can use the positive emotions and social connections that we take from video games to start making a difference in the real world,” McGonigal told Reuters.

McGonigal got into the video game business when she applied for a game design job off an advertisement on Craigslist in 2001 during her first semester as a graduate student at the University of California at Berkeley. She made her name in the industry by helping design a popular mission-based game that accompanied the launch of Microsoft’s video game “Halo 2.” But her work did not stop at video games. One game she designed was a futuristic one called “World Without Oil,” a collaborative effort where thousands of people showed how they would cope with an oil shortage. A more controversial game is her “Tombstone Hold ‘Em,” where participants play a physical version of poker using tombstones in cemeteries. Her book argues the game creates a “social, and more enjoyable way of remembering death,” a universal human fear.

But much of her research focuses on how games make people happier, and they stem from an idea she used to overcome challenges in her own life.

In 2009, midway through writing her book, McGonigal suffered a brain injury that left her depressed and unable to write. A doctor said her brain wouldn’t heal unless she lifted her mood. So, she did what she knew best and created a game that helped her cope with the depression.

The game, called “SuperBetter” involves creating a secret identity as a superhero (her’s was ‘Jane the Concussion Slayer’) and then recruiting friends and family to play side kicks in real life. Her sister, for example, became the “Watcher” and had to call McGonigal each day to check on her mood, while she had other friends provide comic relief. “This is a game designed to increase your resilience in the face of any injury or illness, anything from asthma to diabetes to losing weight,” she said. “SuperBetter” will be tested in clinical trials at The Ohio State University Medical Center this summer.

Initially, McGonigal was worried that her theories would be rejected by an industry that wanted games to be seen as purely entertainment or escapist, but the opposite happened. Sam Houston, who works for Electronic Arts, recently saw McGonigal deliver a keynote address at the Penny Arcade Expo East and said he was struck by how she connected with the crowd and got everyone to take part in a massive thumb-war. “Jane did a good job of introducing the concept that gamers can change the world without getting preachy,” Houston said.

McGonigal’s next project is called “Find the Future,” a game that will be played at the New York Public Library in May. About 500 people will spend the night searching for special items like a Thomas Jefferson handwritten copy of the Declaration of Independence. By morning, the winner will have collected enough material for a book that will go into the library’s collection. “It’ll give people the chance to achieve the real life goal of becoming an author and by doing it through a game, they’ll have the structure and motivation to get it done,” she said. (Source: Reuters)