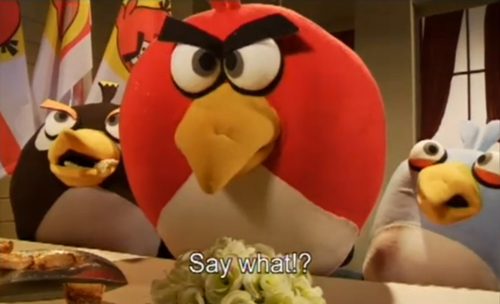 In one of those “we are bigger than Jesus” moments, Peter Vesterbacka, “Mighty Eagle” of Angry Birds maker Rovio, told the first panel of the day at DLD that Angry Birds was bigger than Mickey Mouse.

He made the comment to great applause in the auditorium, although the “social games is all a bubble” theorists collectively sighed.

Now to be fair, what he actually said was that Angry Birds was searched for more than Mickey Mouse. Given that Angry Birds is very much au courant, while Mickey first hit the screen in 1928, that is not all that surprising.

There were several of these “old companies don’t get it” statistics mentioned during the panel. Barbie, invented in 1959, has shipped one billion units. The panel predicted the first half- billion app will happen this year.

But what we wanted from the panel was perhaps a little bit less of the “wow!” and rather more of the hard data, figures that allow analysts to make sensible valuations. One of the most interesting statistics was from Rovio: Last year 200 million minutes were whittled away playing Angry Birds in the U.S. alone. So much for Clay Shirky’s cognitive surplus then.

The makers of Doodle Jump, Lima Sky, say they do not release figures, but company President Igor Pusenjak, did admit that on Christmas Day there were one million downloads of the game, earning them $200,000. Doodle Jump is, according to Apple, the all-time top paid-for app (a comment that prompted Mr. Vesterbacka to mutter “perhaps Apple needs to look at its figures again”).

But as we posted recently, there is, despite the over-blown rhetoric, evidence that this is not a bubble. It has bubble-like properties, not the least of which is the hype. But underneath it is a serious, and highly profitable business.

According to Ilja Laurs, CEO of GetJar, the world’s largest independent app store, the app industry will be worth between $30-$50 billion in the next three years. Ignoring the rather large margin of error in that prediction, it is still a very sizeable market. There was another—maybe hype-worthy prediction—that the app business will make twice as much as the music industry in the next three years.（source:wsj）