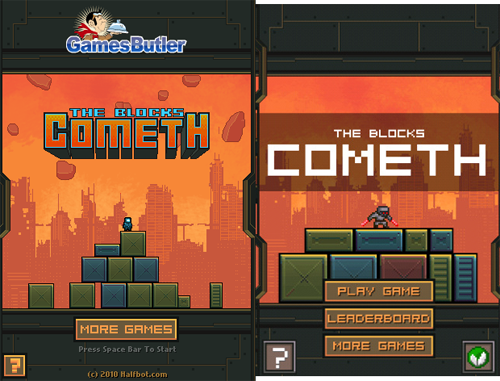 the original VS the clone

One of the criticisms of Apple’s App Store (and application stores in general) is how it is commonplace for a popular app or game to have dozens of clones. These can be sifted through due to their low popularity and shoddy icons, and on the off chance you prefer an ad-supported knock-off over a 99 cent app, they’re a good alternative. But not every clone is flattery and bandwagon -jumping; some are outright theft. Case in point, an iOS game entitled The Blocks Cometh, which is a straight lift, graphics and all, of a Flash game of the same name by developer Halfbot. The original is at left, above, and the clone at right.

The iOS app has been approved and is available to buy now, though of course you shouldn’t buy it (Halfbot is working on an actual iOS port). A week ago, they notified Apple that the game was clearly made entirely from stolen IP (the character sprite was stolen from another game, The League Of Evil), which isn’t surprising, as the rest of the offending developer’s games seem to be knock-offs as well. But a week later, Apple has yet to pull the app or give any kind of substantial response.

Now, it’s easy for us to snipe at Apple from here, since we’re not in charge of executing the distribution of hundreds of thousands of discrete applications. But as I pointed out when Facebook made a similar seemingly minor lapse and foreclosed on a perfectly legitimate fan page, if they are unwilling to take responsibility for the ecosystem they’ve created, that’s worthy of serious rebuke. In this case, Apple is failing to address the very pressing concerns of on of their most important demographics: independent developers. Melvin Samuel at Halfbot, whom I asked for comment regarding all this, expressed concern over the lack of real feedback from Apple. Legal recourse could be taken, but shouldn’t developers have a direct line to publishers in cases like this?

If Apple will take responsibility for the app by approving it, they must also assume responsibility when they have made a mistake doing so, properly and in good time, and follow through when something like this IP hijacking takes place. That’s called paying the cost to be the boss. If they can’t or won’t do that, well, at the very least, developers will start to get the feeling they’re not appreciated, and that the App Store isn’t the level playing field it’s advertised as (an optimistic fiction to begin with). That’s not something Apple can risk.

Apple and Facebook on their toes, and to do that it’s necessary to make a scene now and then. Casual injustices like this brazen theft of an indie developer’s hard work mustn’t be allowed to be swept under the rug.

Update: The offending app was pulled the evening after this article (along with others like it around the net) was posted. I should clarify that I am not advising or disadvising certain legal actions or consequences. This is about Apple and companies like Apple continuing to provide a healthy ecosystem. To sue or not to sue is the prerogative of the injured party, but to alert Apple and expect a timely and relevant response is the privilege of a licensed developer and customer. It’s our job to keep Apple (and Facebook et al.) on their toes when stuff like this slips by under the radar. We can’t do it every time (a commenter notes that an app of his was recently duplicated as well) but we can do our best to make it visible now and then and hopefully prevent future occurrences. Think of it as a sort of neighborhood watch.（source:mobilecrunch）