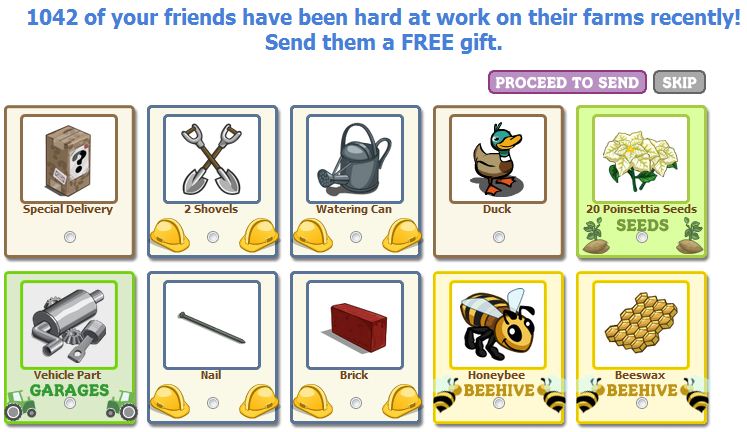 Gifting is one of the largest social features in Facebook games. Games are constantly encouraging us to send gifts to our friends or ask for gifts from our friends. It’s a major driver of virality (the growth of games) and also of retention (what keeps players coming back). Robin Yang, a producer at Funtank, has written a post stating that gifting is broken.

Yang’s main argument is that gifting is not truly social in its current implementation. She claims that there are not many parallels between the psychological drivers for sending gifts in real life with gifts in social games. In real life, gifts have true meaning behind them. Gifts cost money to purchase and send, and you will generally choose a present for a recipient very carefully. In addition, you would never send a gift in real life with a tag attached to it requesting a gift to be sent back to you.

The fundamental reasoning behind gifting is that it drives two of the three key metrics for Facebook games. It brings in new players and it helps to keep them around. Gifting has been a carefully honed mechanic since the very first Facebook applications found it to be successful. Social games adopted the feature when it was clear that gifting provided very significant benefits to the game. Gifting did not end up in its current incarnation by accident. You are surely being exploited to increase beneficial numbers for the game you’re playing.

However, many players will readily admit that gifting is a major part of playing Facebook games. Players enjoy requesting and receiving gifts, and they love sending gifts to friends. It might not be as social and meaningful as it could be, but players do enjoy it as a fundamental part of social gaming.

Some of Yang’s suggestions include limiting the number of gifts you can send per day to make each one more meaningful. She also suggests that gifts should be sent for achievements and particular moments of joy within games, and not just a casual mass spamming of all your friends on a daily basis. My first instinct is to think that this would actually hurt the game’s retention and virality, and that it would be very hard for games to adopt. Other people feel that making the games more social will actually help them grow in the long run. （Source：Games.com）