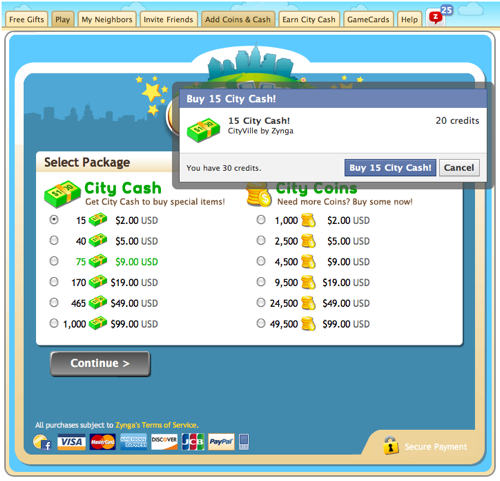 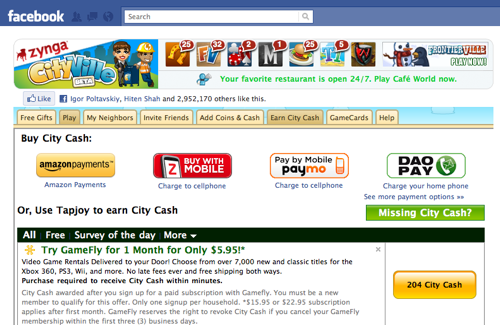 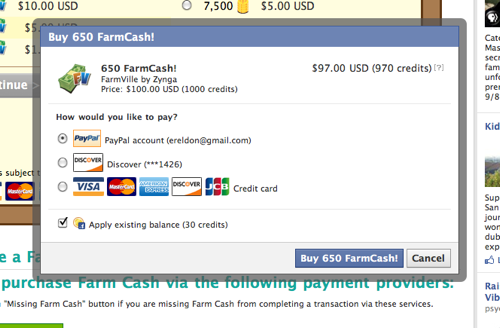 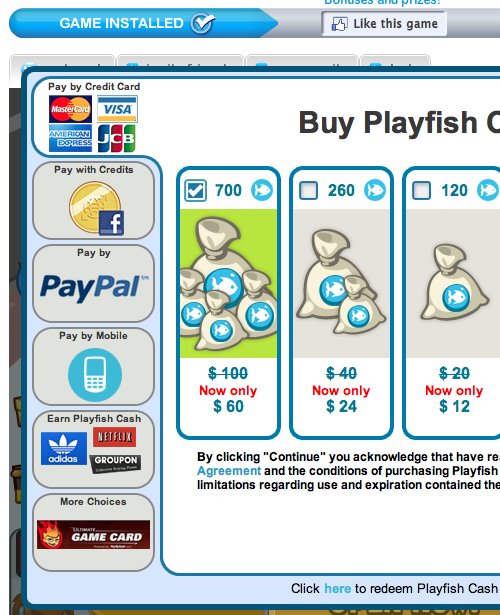 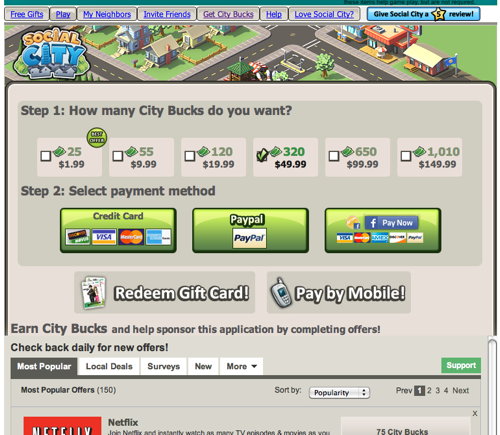 Over the past year, Facebook has steadily worked to make Credits the only payments option on its platform, but has given few specifics details on what it’s doing during the transition. Below, we take a fresh look at Facebook, its top developers and the platform providers to help clear up where Credits will go in 2011.

Although it has never said so explicitly and publicly, Facebook has required, one by one, all major developers to sign five-year agreements agreeing to use Credits exclusively. That’s instead of the direct credit card payments, third-party offer walls, game cards, and other payment options that have until now been the main ways to buy virtual currency for social games and apps on the platform.

Facebook’s initial plan was to fully transition to Credits by the end of 2010, but the results might not be obvious today. For example, the two largest games on the platform — CityVille and FarmVille — show an offer wall, game cards, and a variety of other non-Credits payment methods.

Yet these two games, along with most others from leading developers, have already integrated Credits as the only method of paying using credit cards. As you can see in the screenshot below, you’re directed to spend your Credits, not buy the City Cash game currency directly. And that means Facebook is already beginning to make a significant amount of money from virtual goods revenue in social games.

Direct payments currently account for over 80 percent of revenue in most social games, as we cover in our Inside Virtual Goods: The Future of Social Gaming report, and that proportion has been increasing steadily over the last few years. So, because Facebook takes a 30 percent cut of all Credits revenue, it  is now beginning to pull in a large portion of the hundreds of millions of dollars being spent on virtual goods on the platform.
Where Credits Are Still Missing

Credits are visibly missing from some locations in games. Yet from what we’re hearing, that won’t be the case for much longer.

In the past year, companies have been pushing alternative monetization ahead on their own, keeping existing revenue streams intact during their transition to Credits. Many invested a significant amount of their own money in payment systems before Facebook began pushing the Credits requirement, which they have still been capitalizing on.

The most striking example of missing Credits is in CityVille — the largest Facebook app ever. Since launching at the beginning of December, half a year after Zynga agreed to sign on to Credits, CityVille has featured a wide range of the other options, including a non-Credits offer wall from Tapjoy. Zynga’s previous hit, FarmVille, also still has the Tapjoy offer wall that it has had for years (since back when Tapjoy was Offerpal).

As we wrote last week over on Inside Mobile Apps, Tapjoy is still seeing significant revenue from Facebook, while other offers companies have told us that their revenues on Facebook have been growing by around 20 percent every quarter in the past year.

Zynga was also busy adding other non-Credits payment options over the course of the past year: It announced programs with American Express and Citi nearly at the end of the year, allowing users to exchange their card loyalty reward points for virtual currency, even though Facebook has been building out its own loyalty exchange program over the same period.

Beyond Zynga, the usual variety of non-Credits payment options are also still live on established hits like Playfish’s Restaurant City and Playdom’s Social City, even though those companies have also already agreed to the five-year Credits deal.
How Long Until It’s All Credits?

Facebook, then, seems to have prioritized moving all direct payments over to Credits before messing with the variety of alternative payment options. That progression allows it to get Credits in front of the bulk of paying users while giving developers more flexibility around the switch. Since the larger companies were upset about their investments in their own payment structures going away, this slower rollout gives them some more time to monetize some of what they’ve built.

Meanwhile, although some developers have previously said that Credits make less total revenue than other methods, many have been saying that it works at least as well if not much better. The promise of Credits isn’t just a bigger piece of the revenue pie for Facebook but a bigger pie for all — with Facebook’s branding, promotion in the interface, site-wide usage, its own alternative payment options, everyone could make more money.

That seems to be happening more or less as the company has hoped, although there are still some potential problems in the system. For example, some developers report that over half of the Credits spent in their game are promotional Credits that Facebook does not pay them for. This problem is most severe for games with low-priced virtual goods, which may have led other developers to raise their prices. We’ve heard that these promotional Credits may slowly be washing out of the system, but as long as Facebook still offers promotional Credits, developers who don’t design with this problem in mind may find their revenues to be more diluted than expected.

We’ve also been hearing that Zynga is planning to move to Credits-based offers in all of its games within the next couple of months, and we expect other developers to do the same. That should bring most of the rest of the outstanding revenue in to Facebook, too.

We asked Zynga for comment its transition to Credits, and here’s a spokesperson’s response:

We are fully committed to Credits as the payment method we employ in our games on Facebook. We’re working closely with Facebook on transitioning offers and alternative payment options to Credits in our game interfaces over the course of the next few months. We can’t comment on specifics but are committed to extending all of the options for players to ensure the best user experience possible, including Zynga game cards.

We expect other developers are on a similar schedule. Look for the transition to be over soon.

For more, we’ll be discussing the ins and outs of Credits with Facebook and leading social game developers at our Inside Social Apps conference in San Francisco on January 25th. （Source：Inside Social Games）